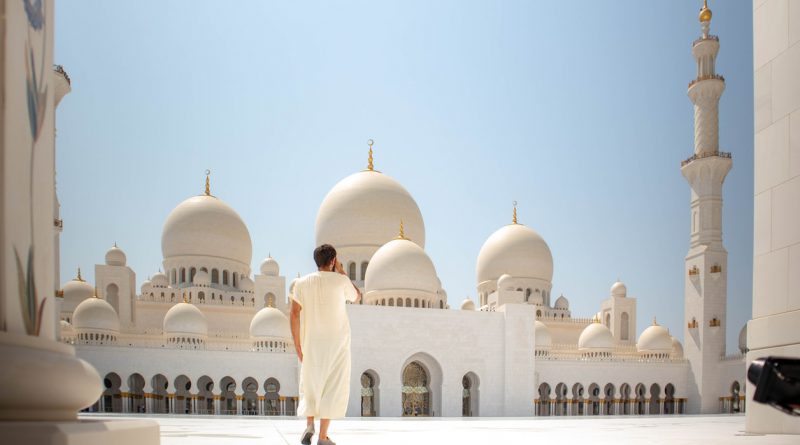 Ramadan is an annual Islamic celebration that lasts for thirty days and concludes with Eid Al Fitr (the Feast of Fast-Breaking) – the second most important Islamic feast after Eid Al-Adha. More than a billion and a half Muslims all over the globe celebrate this sacred occasion by performing a wide range of rituals, such as fasting, worship, and reading the Holy Qur’an as Ramadan is a great opportunity for Muslims to get closer to God Almighty and to obtain God’s blessings, mercy, and guidance.

However, Ramadan is more than a fasting month as it is rooted in culture, traditions, and vibrant festivities, which differ from one region to another. Muslims all over the globe are keen to maintain their Ramadan customs and rituals. Although customs, traditions, and folklore vary from one country to another, the universal Ramadan spirit remains the same. We have chosen for you a varied collection of scenes from several countries that highlight the beauty of this month.

Muslims in Indonesia are famous for the cleansing rituals that they perform the day before Ramadan. Such tradition is called ‘padusan’, and it means bathing. This purifying tradition occurs mainly in Central and East Java as Javanese Muslims plunge themselves in Java’s springs, in which they immerse their bodies from head to toe. However, if you are far from the Java springs, you can suffice by soaking your body in any swimming pool or lake near to you. This tradition is a clear manifestation of the blend of culture and religion in Indonesia, for the Java springs are admired as a cultural symbol and landmark. Muslims embedded this landmark in their religious rituals and transformed it into a symbol for spiritual purification and transcendence. When the body descends under the water, the soul ascends to a higher path towards God. It is also a beautiful gesture of humility. The tradition was handed down by the Wali Songo – a group of Muslim teachers who travelled to Java to spread Islamic awareness, marking the first missionaries of Islam in Indonesia.

Echoing the tradition of trick or treat that occurs in the USA on Halloween, Muslim children in the UAE hit the streets on the 15th of sha’ban and sing ‘Haq El Laila’ song (The Night’s Price). Sha’ban is the month that comes right before Ramdan, and the mid of Sha’ban is regarded by Muslims as the day in which Allah pours His mercy and forgiveness upon the earth from Maghrib until Fajr (from sunset till dawn). On this day in UAE, children wear light-coloured, bright clothes and collect sweets and nuts in vibrant bags. They sing many joyful local songs, such as “A’tona, Allah Yutikom, Bait Makkah Ywadikum,” which translates to ‘Give us, so that God rewards you and grants you a visit to Mecca.’ The tradition morphs the varied houses of UAE into one family that shares love, gifts, along with many precious memories every year. Our isolated societies nowadays are in dire need of such all-encompassing traditions that forge connections and reinforce social bonds among citizens.

After they eat their iftar meal, Iraqi people hit the streets and divide themselves into huge groups to play a traditional local game called El Mheibes (The Ring). This game includes two groups of about 40 to 250 players, who all cooperate one after the other to conceal a small ring. Each group must have a team leader that holds the ring concealed under a blanket. Other group members must sit with their fists tight in their laps. The leader should pick one member to give him the ring secretly, whereas the opposing group should try to detect this member. The play relies on the skill of reading body language. Moreover, this game is rooted in ancient local tradition and has even been sponsored by the state as it is one of the community-wide games that the Iraqi government organizes to promote connections between people. Ramadan in Iraq is one of the most festive occasions that take place throughout the year. If you walk in Iraq at this time, you will feel as if you are walking in a large club or playground, wherein all people are laughing and playing happily, no matter how old they are. This synthesis of culture, entertainment, and religion is one of the most admired butterfly effects that Ramadan brings about.

Muslims in South Africa wait for the Maan Kykers (Moon Watchers) to locate the moon as the tell-tale sign of the advent of Ramadan. Moon watchers gather at Cape Town’s high peaks to observe the skies and make their confirmation message. Those moon watchers are selected by South Africa’s Muslim Judicial Council, and they are tasked with spotting the moon in a crystal-clear sky by their naked eyes. Citizens can also join in at Signal Hill, Three Anchor Bay, or most other sites that have a charming view of the night sky. Cape Town is replete with famed mosques, such as the Auwal Mosque, established in 1794, and the Palm Tree Mosque, established in 1807. For the first night of Taraweeh prayers, most Masjids are crammed with prayers, with their children playing around and buzzing joyfully. Neighbours roam the streets before iftar time to quickly offer palates of delicious treats to those in their immediate surroundings. Many people love to take their iftar on Clifton Beach, which is a mesmerizing spot admired by tourists and local citizens alike.

When Ramadan takes place in Turkey, more than 2,000 drummers stroll the streets of Turkey to announce the holy month’s start. Drummers wear traditional Ottoman clothes, including a fez and vest that are both decorated with traditional themes. As they roam the cities with their davul (Turkish double-headed drum), the drummers encourage residents to show some acts of generosity by giving them tips (baqshish) or even inviting them in to eat a Suhoor meal.

Many municipalities in Turkey set up Ramadan tents and boxes in streets and public places to provide free Iftar to people who don’t manage to arrive home by the time of Iftar. This tradition was established by prime minister Necmettin Erbakan in 1996. Ramadan in Istanbul is characterized by its charming atmosphere as Istanbul encompasses a myriad of beautiful mosques that celebrate Ramadan by handling sparky and radiant wires between their minarets. People write on these wires some heart-warming messages to welcome Ramadan. The exchange of visits between families during the holy month is part and parcel of Turkish culture: Food dishes are always exchanged among neighbours, which strengthens social relations and creates an atmosphere of intimacy and love.

Before sunset, Pakistani restaurants get crowded to offer hot iftar meals to their visitors. The most common meal for iftar is samosas and “al-bakoura”, which is a mixture of potatoes and chickpea flour with fried spices, presented with fruit salad as a dessert. In Pakistan, iftar time doesn’t exceed five minutes. People eat the meal quickly and perform the Maghrib (Sunset) prayer. After Taraweeh Prayer, families prepare for themselves a fancy dinner to satisfy their hungry buds. Afterwards comes Suhoor, which is considered to be the most important meal in Pakistan. One of the most prominent Ramadan rituals in Pakistan is preparing the refreshing Shatoo drink. This local drink consists of a mixture of dried fruits, sugar, and lemon juice. The drink can be mixed with any type of other liquids, such as water or milk, and most people love to add grated almonds to it.

On the last day of Ramadan (the eve of the feast) and when the full moon starts appearing in the sky, women gather themselves to visit Pakistan’s local bazaars to buy some colourful bangles and to paint their hands and feet with joyful henna designs. Shopkeepers tend to decorate their shops with bright and colourful wires and keep their shops open till morning. Some women love to buy pieces of jewellery on this day as well.