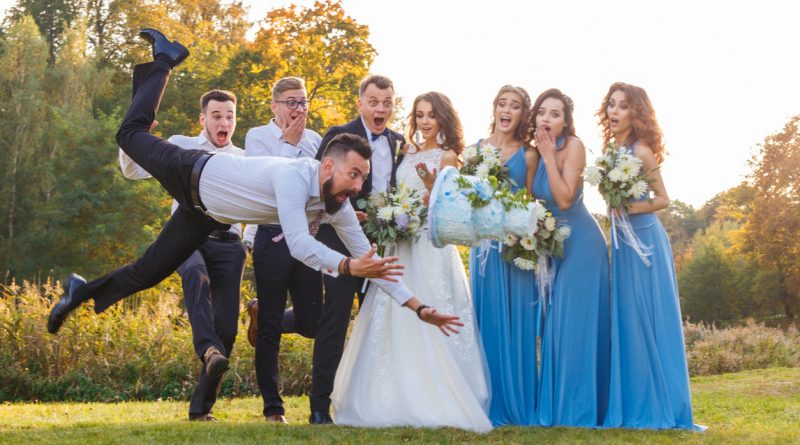 Although every country has its own wedding tradition that distinguishes it from other countries, some counties have gone beyond the threshold and formed strikingly eccentric rituals, some of which can make you crack up hysterically. Thus, throwing the bouquet and cutting the cake is so cliché on wedding days compared to these weird traditions.

In France, after the wedding, people gather outside the house of newlywed couples with their pots and pans and start banging on the first night of the wedding. The guests can make a wide variety of cacophony, such as blowing some horns or playing abrasive songs. After disturbing the married couples with such a raucous attitude, the married couple can’t but open their door to treat their guests with drinks and snacks to save their night from being crashed. This tradition emerged in the middle ages intending to toast the two lovers who were once happy right before the guests’ arrival. Historians indicate that this tradition started as an expression of public disapproval of bad matches. Sometimes it was done as a condemnation sign when outsiders marry one of the town’s lovely girls and when infidelity was involved. So, it seems that things have improved over the years.

Imagine, as you enter a party, you see the bridegroom lying on the floor and beaten on his feet with sticks. Could this be the end of the relationship? Has the bridegroom attempted to abandon his bride right before the wedding? Not in South Korea as it is believed that for a bridegroom to readily start his marital life and settle down, he needs to be beaten on his feet with dead fish and bamboo sticks! So, after the wedding ends, the groom’s friends gather to make him take his socks off, tie a rope around his ankles, and give him a memorable beating. The groomsmen use a variety of beating means, such as canes, sticks, and fish. What’s more, the groomsmen ask the groom during the beating process about the most important things he should know about marital life. The groom needs to answer the questions of the quiz to avoid more beating. However, the beating is not intended to be violent. After all, this is a funny practice for the group to cheer up. Maybe the only discomfort is experienced in the dead-fish part.

The bride is so gorgeous? Let’s shower her with filth! Marital life isn’t a piece of cake, and the newlywed couple needs to be prepared for that, right? In Scotland, people believe that for the married couple to get an edge over the difficulties to come, they should be showered with goo and other disgusting stuff! The tradition goes like this: Family and friends catch the bride and the bridegroom, tie them to a tree, and squash their pretty looks with soot, treacle, flour, eggs, coffee, tomatoes, and any adhesive substance they would like to spare. The couple is taken afterwards on an open-backed truck accompanied by blaring noise by the couple’s kidnappers. The blackening day is usually the day that precedes the wedding day. The tradition started as a means of warding off evil spirits and evil eyes.

The Marquesas Island: The Human Carpet

Marriage means giving oneself up for his better half after being united into one flesh. A married couple is required to leave their families and hold fast to each other. On Marquesas Island, people formed a tradition symbolizing this idea; however, they got a bit carried away with the metaphor. The tradition goes like this: at the end of the big day, relatives of the wed couple lie side by side in the dirt – sometimes with their face down to earth – forming a human carpet on which the married couple treads. The ceremony is a reminder for the couple to put each other at the forefront of all priorities.

In Germany, people gather in front of the bride parent’s house with porcelain cups and plates to be shattered all over the floor! This ceremony takes place on the night before the wedding, and it is believed to bring good luck to the couple taking the plunge. Families usually love to invite their neighbours to participate, maybe to make sure they won’t complain about the noise? Guests come with wedding gifts and gather to share some foods and drinks. One of the most common plates they prepare for this occasion is chicken soup. In ancient days, Germans used to give brides chicken soup before the wedding for fertility reasons. You might think that this ceremony is so exorbitant with all the smashed porcelain, but most people bring the stuff that they want to get rid of in the first place. However, as the superstition goes, not all broken china can bring good fortune as some types of glass lead to years of misfortune. So, you need to be careful of what you bring.

Bride Must Cry for One Month. Yes, you read it correctly: The tradition of tearful marriage took place for numerous decades starting from 1644 to 1911. It is not that popular nowadays, but it still exists in some Chinese towns, such as Tujia. The tradition requires that the bride and her friends gather every day to cry for one hour over the period of one month. After the first week, the mother of the bride joins the club of planned crying. The grandmother joins in the third week, and in the final week, the bride’s sisters take their part too. Sometimes, people use some sad wedding songs to make the bride’s tears fall. After this crying river, the bride can start her way as a married woman safely! In China, there is a common belief that crying during the marriage, in general, is an essential factor for the marriage to be successful. Elderly people in China indicate that people used to look down upon the brides who didn’t cry. If the bride failed to cry, people would deem her ineligible for the marriage. Anyways, this is not one of the wedding traditions one would like to perform. Getting hitched is undoubtedly a significant challenge, but walking down the aisle with dry, red eyes is no picnic too.