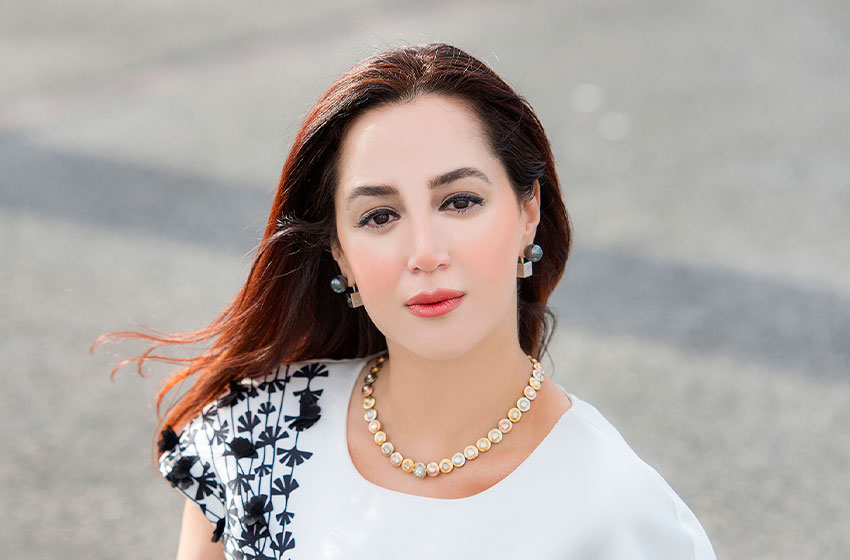 The international soprano vocalist, Zeina Barhoum, is more than just a talented performer with astounding theatrical skills. Having launched the first Arab Opera festival in the Middle East, ‘Amman Opera Festival’, the Jordanian sensation is working on orchestrating a cultural appreciation for what she calls “food for the mind soul and heart” –the opera. Exceptional opera performances are not her sole objective; the initiative will soon be launching educational programs in collaboration with international institutions to work hand-in-hand on bringing people of all cultures together through art. The songstress and fashion designer opens up to us about how she made it where she is today, and tells us about her plans of perpetuating fine arts regionally and internationally.

You’re an internationally renowned vocalist and theatrical performer. Why did you concentrate on opera singing?

We always had music around the house, though I particularly started showing an interest in performing arts at the age of 12. It started when I performed for the first time at the school talent show. I was in the school choir, and my music teacher discovered that I have a vocal range for a future career in opera. So he then spoke to my parents, and they supported the idea very much and focused on enrolling me in more music and vocal training classes. After receiving my BSc. I began to adore Italian opera specifically, alongside other languages in the operatic repertoire when studying in Rome. It’s so beautifully expressive, soulful in every way and absolutely liberating in every aspect.

You have done many operatic roles. Do you have a favourite?

Violetta from ‘La Traviata’ is a very moving role on all levels. Above all musically; it simply automatically sets the emotional tone to the rest of its aspects: the storyline, words and roles. The interacting roles can majorly help with any given performance when heartfelt. ‘La Traviata’ is a worldwide known Opera and one of the greatest operas ever written in my opinion. Its love story is so powerful, many who attend it would normally break into tears.

What’s one unforgettable performance in your career so far?

After long recording sessions and exhaustion that I had to cope with at the launch of my album in Ukraine in February of last year, the most amazing energy from the audience gave me the biggest boost of adrenaline –I felt like I could fly! I sang for an hour and a half with the city’s Philharmonic Orchestra and didn’t feel a tad bit tired! Truly one of the most rewarding experiences. The concert hall’s acoustics and the venue were stunning.

Where did you get the inspiration to launch ‘Amman Opera Festival’?

I always wanted to put together an opera in Amman’s Roman Theatre, but the inspiration intensified when another initiative came to life –‘Opera at the Roman Downtown’ in the same venue. It just seemed like the perfect place at the time, and I was right. People described the event as magical, and we are still getting the same feedback on last year’s production of ‘La Traviata.’ The Roman Theatre is a magical venue with history that plays into making opera productions come to life. I truly feel blessed with the achievement and the supporters who helped make it a reality.

What do you hope to achieve with this festival?

I’m hoping it will help spread this art form across the country and reactivate a recent initiative of building a national opera house. My aim with this festival is to send a message to the world, of love and togetherness amidst the difficult times we’re facing. Having had over ten different nationalities take part was and will always be a key pillar in delivering this message. I think every society is in need of interactions with the arts as it has been for centuries; art is food for the mind, soul and heart. It makes a society more productive, positive, relaxed, develops cognitive thinking and most of all brings people together from different parts of the world to speak one language.

We heard you’re preparing for the second edition of the festival. Could you tell us more about the production that will take place?

The production will be the famous ‘Opera La Boheme’ by the composer Giacomo Puccini. I am very excited and proud to have it featured as part of the second edition of the festival. It is a classic love story set in Paris, highlighting the love Rodolfo and Mimi experience at first sight in a candle-lit ambiance. There are festivities that are showcased in the second act which include other bohemians. Poverty and illness get in the way, and their effects are emphasised more in the third act. But as usual and with a sad ending, true love prevails.

How did winning the Grand Prix award feel?

Totally unexpected! I was away when I got the message that I won the Grand Prix award in an international singing competition, and I did not see it coming as I was the only Arab contestant. I feel very humbled and regard it as a big achievement; not only winning the award, but also having been able to build cultures as I always aspire to do. Gaining the love and respect of a culture that was once totally new to me is such an honour.

You have carried out countless aspiring events championing different causes, including refugees and women. Any of those closest to your heart?

They are all equally close to my heart. Each cause has different needs to attend to and where there is a heartfelt need, there is always space in the heart.

Tell us more about your passion for fashion. What sparked your love for style and designing?

My first degree was from AUS in Sharjah, UAE, in Visual Communication. I always had a soft spot for visual arts. It all started when I was a child, and my parents discovered I could draw before they discovered I could sing! It became a passion of mine that is undetachable. I somehow always drew a dress or two every once in a while and adored fashion growing up. My style icon is my mum. Hats are a craving I have almost all the time. I absolutely adored fashion in film, musicals, ballets and operas. I went to my first ball when I was 12, and was totally mesmerised by the gorgeous dresses. Not to mention the beautiful music always associated with it. Luckily, our family business is quite related to fashion. CCI designs and produces uniforms and garments for international brands as well. I am proud to be its creative director, and so happy I get to keep igniting my passion for fashion.

What’s your perspective on having Arabic calligraphy on some of your jewellery designs?

I love the aesthetics of Arabic script. It is a beautiful language on all levels. I am strongly attached to my roots as an Arab and I feel very strongly about including meaningful Arabic calligraphy in my jewellery that is close to my heart. Phrases I always related to in my life; my own and extracts by poets I admire a lot. Not all my collections include Arabic script, but most do.

What inspires you to paint?

My inspiration is derived from my love for life and the work that I do; be it jewellery, garment design, singing, the places I visit or the people I meet.

I love painting portraits. Personalities are so intriguing and reflect so many interesting complexities that sometimes exude so powerfully. The beauty of nature around us is forever overwhelming. One truly learns something new every day. I do not usually plan to paint in advance: if I get inspired to paint someone or something in particular, I would just go for it. If there is an exhibition I need to work on in advance, I would usually let my perception take over, and have it dictate the story as much as I can rather than the other way around.

Any upcoming projects in the near future?

Yes. I am really looking forward to releasing my first single ‘Come Waltz with Me’ from my second album ‘Alcantara II – Bridging Cultures across the Mediterranean and Beyond.’ With the idea of “one world, one music,” I’ll be continuing my tour this year with the album and other performances in concerts and full opera productions in Europe, Asia and the Middle East.

What advice would you give to the youth who are going through self-discovery?

Dreaming big is okay, and making your big dreams a reality is definitely possible. Thinking that you still have so much to learn is what will get you closer to your hopes and dreams and will keep you grounded. Planning ahead and time management is what will put you on the right track to success, though bear in mind that there will be constants that might turn into variables, and you should be well-prepared accordingly. Nothing is particularly set in stone, and as one of my wise teachers said once, “be one million percent prepared so that you are one hundred percent ready when it’s time for any initiative to take off.” Self-discovery is different from one person to another, and some “discover” themselves very early on in their lives, while others a lot later. A friend of mine who played the clarinet all his life became a tenor at 40! And a really good one! So there are really no rules. It is really hard work and perseverance that pay off. Most importantly, be true to yourself no matter what you do and don’t give up on your dreams. The sky is not the limit!