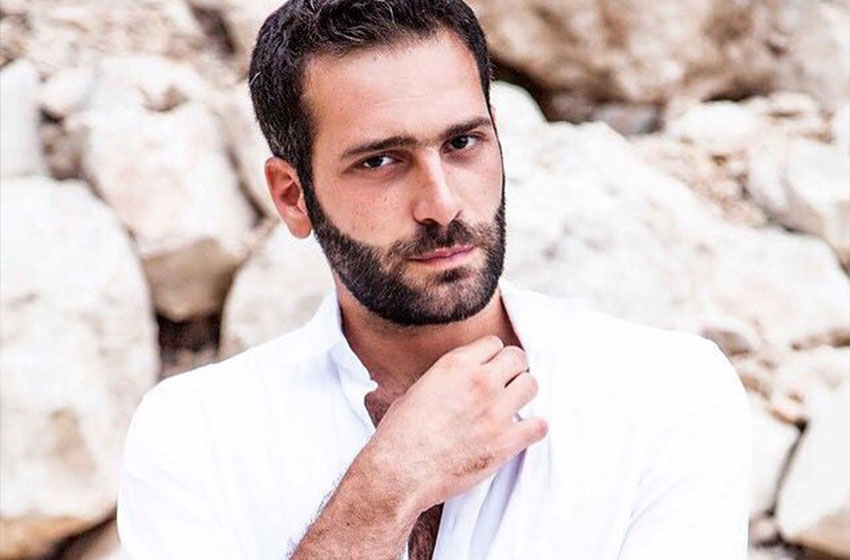 From a Fresh Face to a Rising Star

It was only four years ago when we saw Wissam Saliba’s talents on the screen in the hit TV series, ‘Ahmed and Christina,’ which tells the story of two young adults from different religious backgrounds falling in love. You might also know the rising star from the international Arab film ‘La’eni Bahebak’ (Because I Love You), which continues to receive global and regional acclaim until today. We talked to Saliba about his exceptional role in the upcoming ‘Mala Al’a’ (Trouble); a film that narrows down the generational gap by blending contemporary social angst with outdated obligations imposed on millennials of today. The Lebanese star with a multi-faceted resume opens up to us about his latest film, and some of the challenges he has overcome thus far.

What sparked your interest in the entertainment business?

I’ve wanted to be an actor since I was twelve. I used to go to drama school, and I’d get kicked out of class all the time because I wanted to do something more; I always tried to challenge myself, and the teachers would end up being pissed off at me. It was a time when I realised acting is what I really wanted to do. It was either that or basketball. My father is a singer and actor, and I think in my subconscious, the idea was always there, but it wasn’t just my dad’s career that ingrained it; the idea developed as I hung out backstage and started going to school. Watching TV series and taking drama classes at such an early age just set it off.

You studied film direction in the USA. Why haven’t you pursued a career as a director yet?

Because I believe a director needs to be a lot more mature in the field – so to speak. There are plenty more experiences I need to absorb to be able to direct. Film direction encompasses knowledge in every department, from production assistance, the wardrobe and makeup all the way to the director of photography and casting. A director gets all the blame, and he gets all the praise, so I want to wait until I’m ready for that. Studying in the US taught me the business of acting more so than just acting, alongside the business of directing and producing. Hanging out with professionals and knowing what a good meeting is, and how to benefit from a bad meeting was a lot of help. I learned how to be my own man. When you’re a part of the big leagues and come back here, things seem to be kind of easy when it comes to business. It was especially helpful seeing as it’s going to aid me in many projects that I have yet to produce. I’d love to direct in the future, namely documentaries.

You portrayed a variety of different characters in many successful projects. Which was your favourite and which was the hardest to portray?

I think it would be my role in ‘Trouble’, just because I love the script and the people I worked with. He’s very awkward, yet funny and very empathetic. He’s quirky, and I love that – it’s always fun to play. The hardest for me to play was probably my first role in ‘Ahmed and Christina’, because I was still getting used to Arabic, and the poetic part of talking on camera. The challenge was not because he’s Muslim and I was raised in a different religion – that part was actually easy because my social life was always multicultural, and I hung out with people from different faiths – but it’s because the setting is in a different era. He’s from the ‘60s, and in a way, it was a very different life from what I lived, but also very similar in the sense that he moved out of his bubble and learned a lot.

What can you tell us about your upcoming movie ‘Trouble’?

I think it’s a very risky flick. The plot revolves around blackmailing over sexual online content, which happens to a lot of boys and girls nowadays. At the same time, it’s very original and fresh to the Lebanese market, since we’re all used to romantic comedies and soap operas here, but our generation was not raised on those and we want to change the game. It’s a road-trip-meets-hangover kind of film. A beautiful story about the son of a political official who was raised to become just like his dad, but has never really lived, or been with women. The film starts with his wedding 48 hours away, and he gets blackmailed after his coach urges him to go online and talk to this crazy girl so he can have an adventure. They have a little bit of webcam sex, and she blackmails him in return for some money. He ends up going on this big road trip with a guy he does not like, and his best friend that he hasn’t seen in ten years. They meet a lot of people along the way and a lot of adventures take place. It’s really fresh, and really fun.

What did you learn from your father, Ghassan Saliba?

He guided me and taught me how to act and react with people. He instilled in me similar qualities to those I learned from my stay in LA. Both of my parents have been supportive and impelled me to never give up. Before I even left to LA, he taught me the most crucial thing of all by showing me rather than telling me, and that’s to be kind. He taught me to respect myself, respect other people, and their time. He taught me to be punctual and remember where I’m from. It’s because of him that I learned to be humble, no matter where I end up. And thanks to that, I was brought to many valuable things in my life.

What about singing? Would you consider taking a bigger step in the music field?

I’m currently working on a bunch of new originals with my friend. We’re putting melody on some lyrics and poetry (written by other people) that I’m still amassing. I am taking a bigger step in the music field, and it’s going to be a mix of Eastern and Western, because the latter is what I was raised on, despite my dad being Ghassan Saliba. I don’t want to make music that sounds completely Eastern because it’s just not me, and I don’t want to feel like I’m in a place that I have invaded; or be a sellout and sing something out of my character. My music will be something that comes from the heart: some very funky stuff –a blend of pop and hip-hop, with some rock and electronic sounds as well. It’s going to be really fun.

You’re famous for your philanthropic work and activities. What can you tell us about that?

I try to use my fame and art to shed light on social awareness. It’s one of the reasons why I wanted to move back here. I do my best to talk about social change and encourage a higher type of thinking: a mental transcendence of sorts. I still work with a lot of NGOs that help refugees as well as those that alleviate poverty, hunger, diseases, and drug abuse. It’s usually pretty clear what needs to be done in these departments, but what I try to shed light on is how we need to live our lives; we, as in, the people in the same social or economic caste as I am, people who make the same amount of money that I do and don’t know what to do with their lives; or feel like they have no purpose. I want to stress on how you can be kind and loving, yet individualistic in your opinions and simultaneously a team player. Don’t follow the norm or what the media tells you. Just live, amass information and learn about yourself and others.

How do you evaluate your journey so far? What do you still aim to achieve?

I’m happy where I am, and very grateful. I’m living in the moment, enjoying my work, and I try as much as I can to shed light on what I just spoke about in terms of social awareness, transcendence and helping others. I aim to create more art and express these beautiful social ideas more vibrantly through my pieces. As for what I aim to achieve, I’d love to produce my own work on the MENA level and later on, expand to Europe and the USA. I would just love to produce art that resembles our streets and our generation.

What are your upcoming projects? Any specific Egypt-based projects you want to tell us about?

Egypt has always been a huge part of my education and cultural learning, and I look forward to learning more about the culture, especially historically. I would love to be in the Egyptian market, not only because it gives me exposure, but it also creates a beautiful reach in terms of my social work. There are plenty of great Egyptian artists I’d love to meet and work with sometime in the future. As for my upcoming projects, other than ‘Trouble’ and my music, I’m working on my new film production company. I’m also working on a dark comedy feature, as well as some projects for Netflix and iflix.