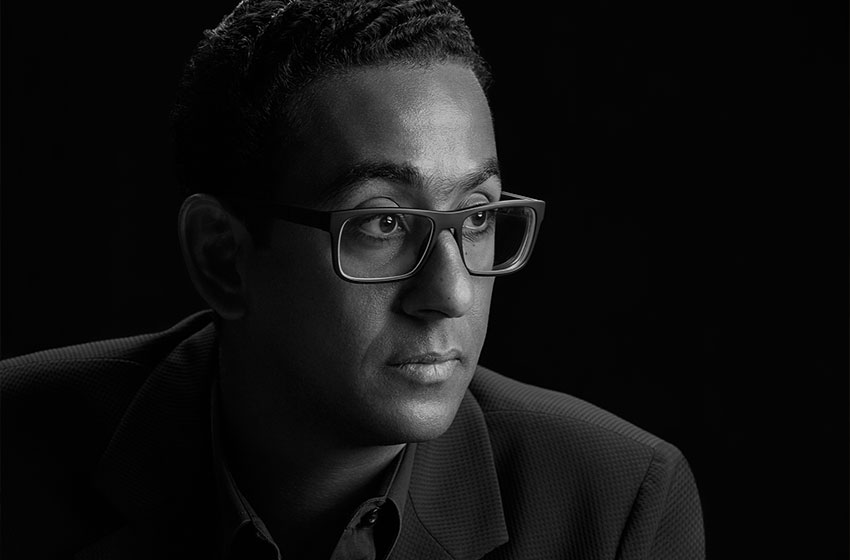 Getting a line on the mysterious artistic genius called

They say that creative minds are exclusive to Hollywood and European cinema, only a less, full-blown cinema is what you find in other countries. But here is foolproof evidence that reveals what Egyptian cinema is really capable of and it goes beyond creativity. Insight had the pleasure of meeting with one of Egypt’s most creative minds and one of the most talented directors of his generation, Marwan Hamed.  His unconventional vision has created some superb, unparalleled and what some might call ‘eccentric’ movies, but in such an impressive way that has put him on the radar of audiences and critics alike. He is definietley ‘avant-garde’ in the film industry and an outstanding director. Shaza El Kodsh talks to the legend about his latest, highly anticipated movie “Al Asleyeen” (The Originals) and how he deals with both positive and negative feedback, and about his view on the future of Egyptian cinema.

Do you think releasing your latest masterpiece ‘Al Aslyeen’, during the Eid season was a good decision, considering audiences prefer lighter genres?

Actually, when the producer and I looked thought about it, we decided that this was the most suitable season for releasing the movie. If you compare revenues of the Eid season with those of the rest of the whole year, youíll find of course that itís the most profitable season. And as you pointed out  ëAl Alselyeení is not the kind of movie that Egyptian audiences are very familiar with, itís of quite a different nature than what theyíre used to. So while releasing it during Eid, it might not compete highly against the traditional type of film, releasing it in a less energetic season would make it completely non-profitable.

How do you react towards the outgoing debate on ‘Al Alselyeen’, especially those who consider the plot to be quite confusing?

Actually this debate piques my interest, I regard having different opinions about my work, a big advantage. For example I read on social media many contended and discontented reviews and the most interesting thing is that some people had to watch the movie twice to write their review. As for the confusing plot, it was obvious from the start that we were doing something out of the box. Bearing in mind a vital fact that audiences differ, they come from different social and cultural backgrounds, we were expecting these inconsistencies, which frankly I take as a highly positive thing for the movie.

Social media is free access for everyone to express his/her opinion, but they are not professional critics. How do you see this?

Yes, although social media users might not be professional, they are highly qualified to carry out a respectful, objective and thoughtful review. This is privilege of the new century, you are now able to watch any movie online whether itís an American or European or whatever. In short, such healthy atmosphere creates hardcore audiences.

‘Al Aslyeen’ is listed under the genre that’s called ‘Mind-Blowing’. You can’t watch it eating popcorn on your Lazy-Boy, it requires your full attention. Are these kind of movies welcomed in Egypt?

Itís true that such movies do not fit into the audienceís comfort zone anywhere in the world, not just in Egypt. Itís not a blockbuster movie in which every detail is crystal clear. In point of fact, the audience is authorized to complete the missing part of the plot in order to have its own original interpretation. But still these films nevertheless do have their own fans, particularly younger generations; otherwise we would have found the genre to have completely vanished on an international level.

‘Al Aslyeen’ have been called representatives of State powers, watching ‘subordinates’ to preserve the country’s inner security or ‘Rooh el watan’. What do you think of this interpretation?

Look, presumably we are all living in a huge network of mass surveillance. We are all being watched 24/7, itís a global phenomenon. There are related incidents like the US surveillance incident on European Union states, Snowden. Moreover in England it was stated that every citizen is watched by 3 CCTV cameras, in the streets. To put it in its simplest form we might call it a sign of the times, which ëAl Alaslyeení was inspired by.

‘Samir’ depicts the average man’s stereotypical, routine life, while there is an implied connotation, that Egyptians are slaves to the current, materialistic world. Why have those living in developed countries not given up on the goddess of creativity?

Well, the major difference is how this creativity is received, let me give you an example. Mark Zuckerberg founded ëFacebookí when he was a college student, then it expanded rapidly till it invaded the whole world. The point is he is living in a productive atmosphere that assisted him to reach his goal. You canít create or develop on your own, you need a whole organization to provide you with facilities and real support. Unfortunately, our country lacks of such atmosphere we might have great minds but itís impossible to achieve anything individually.

The resolution of Samir’s conflict was escaping to a primal spot away from any technological or advanced signs. Is this the solution?

Cinema is not supposed to suggest solutions to the world. The solution that was introduced in the movie belonged to the protagonist only. He had to take a transitional step in his life to solve his problems.

How do you evaluate Ahmed Morad as script writer?

Morad is a spunky and exuberant writer. The script of ëAl Aslyeení holds a great scope of originality, it doesnít resemble any other movie. Besides that he shows his wit in shifting the storytellingís technique from linear to non-linear throughout the events. In fact, I believe that he achieved the same success he has achieved before as a novelist. And of course if he werenít competent and talented, I wouldnít work with him in the first place. [he laughs]

Hesham Nazih soundtrack for the movie as well as his work in ‘The Blue Elephant’ and ‘Ibrahim El Abyad’ is remarkable. Is the soundtrack an essential one?

Yes thatís true and to get straight to the point I believe that every movie should have its own identity that isnít similar to any other movie. Such identity is formed by the coalition of every component like the editing, cinematography, art directingÖetc. So yes itís an essential item as you can easily recognize the movie by just listening to its music theme.

Indeed, cooperating with a homogenous team is the key to success. Of course skill and talent is the cornerstone, but having crew members who have the same way of thinking or in other words I might call it ëa mind mateí, will get incredible results.

Are we witnessing the development of a new cinematic era that overrides the prevailing amalgam of belly dancers, folk singers and artless, dramatic plots?

Actually, I believe that such movies have recently suffered a severe stroke. It took place from the very beginning due to the critical situation back then. The movie industry after the revolution was obviously unpleasant, most of filmmakers deserted the scene for almost 4 years immediately after revolution. But now thing seem to be developing gradually and the real film-makers are stepping forward again.

Many of your peers have paved a new path towards directing TV drama. Do you buy into this?

Yeah sure Iíd go for it, actually I donít see any reason not to do so. Itís a huge market that we should be carving out a new wave for. We can see the huge evolution that has taken place in Hollywood TV drama with big names in the directing realm making their mark, like David Fincher and ëHouse of Cardsí and Martin Scorsese directing the pilot of ëThe Broad Walk Empireí and others who have made it to the top.

What’s your advice for those who look up to you and want to pave their way in directing?

Well, I believe the younger generation is luckier than us. They have much more opportunity and means to direct a short film. Using just a phone or a digital camera, they can upload them and get immediate feedback, which can lead them to professionalism in short period of time. Bear in mind the fact that the younger you are the more creative you will be, so try to make good use of your young, pure imagination.