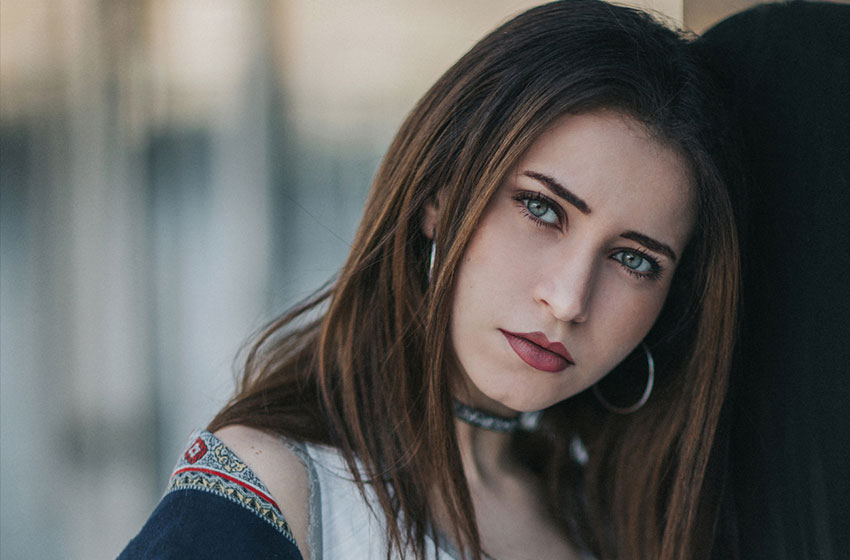 Nowadays, many young actors and actresses are fighting long and hard to introduce their talents to the audience, it’s not an easy challenge. Sarah El Shamy succeeded in drawing the audience’s attention to her performance in the Ramadan series ‘Kalabsh’. She is a promising actress, set to achieve tremendous smash hits in the future. We talked with the light-hearted Sarah El Shamy AKA,’ Salma El Ansary’.

How did you get into the acting industry?

Acting was my passion since my childhood. But my parents took issue with the idea so I tried to get over my dream and joined the faculty of arts, English department. But after the first year I couldn’t take it anymore and so I decided to battle it out with my parents and eventually they surrendered to my will. Then I applied to the higher institute of theatrical arts and the journey begins since then.

What was your first role?

My first role was with the director Sherif Sabry, in a sitcom called ‘Face-Abook’ in 2014. It wasn’t a big role though I was delighted with the feedback.

What about acting with ‘Khaled Saleh’ in ‘Febrayer Al eswed’?

I can tell you that I’m very lucky to have met Mr. Khaled Saleh. He was not only a great actor but a great person as well. His death was a gross loss. I was also honoured to work with the brilliant director Ahmed Amin, it was a significant step in my career.

Many of the series you took part in were screened in ‘Ramadan’ expcept for ‘Al Ab Al Rohi’. Don’t you think that the Arabic audience tend to dismiss off-seasons series? Wasn’t that a bit of a risky decision?

Well, this series holds a lot of risks actually. First of all, the protagonist ‘Al Ab Al Rohi’ himself, who was played by the magnificent Mahmoud Hameda dies in episode 7.  The script writer Hany Sarhan has intentionally established the concept of expecting the unexpected. The thing which is unconventional to the Arabic audience. The second thing is what you mentioned about releasing the series in an off-season, but was necessary as it’s a long-running series; 5 seasons each consists of 60 episodes. However, surprisingly the feedback was exceptional, we were in fact trending on twitter for several weeks.

Speaking of feedback, there were widespread comments opposing the idea of ‘Egyptianizing The Godfather Trilogy’. How did you see that?

Yeah, I did keep an eye on such commentaries, there were tweets saying ‘what the hell they are doing, for God’s sake it’s ‘The God father’!” (She laughs)

Actually, I don’t regard it negatively as the audience were nevertheless waiting with bated breath to see how the Egyptian ‘Godfather’ would be and with time the negative comments were replaced by positive ones.

You’ve worked with superstars like Amir Karara (Kalabsh), Ghada Abd Alrazeq (El Khanka) and Youssrsa (Sharbat Loz). Is it intimidating to perform in front of such big celebrities?

First off, I need to correct this wrong information related to Youssra. I didn’t participate in ‘Sharbat Loz’ as it’s mentioned in many websites. I have no clue where this information came from. It would of course be my pleasure to work with Youssra but unfortunately I didn’t.(she laughs). Back to your question, well, in ‘El Khanka’, my role wasn’t that big and I had few scenes with Mrs. Ghada but she was a lovely and nurturing person.In ‘Kalabsh’, my fear was doubled as the role itself is much bigger playing Amir Karara’s sister. But he chilled me out with his supportive words, he is a very down to earth person and a real brother to me along with Mrs. Hala Fakher. She played my mother in front of and behind the camera. She would come to me and make sure that I was okay, she is a warm-hearted woman.

Which of your roles do you consider to be the biggest step?

Definitely, ‘Al Ab Al Rohi’ I have been called ‘Nada el Attar’ in the street. The audience got very attached to the characters and the events as well.

You’ve worked more than once with Peter Mimi, how as that?

Working with Dr. Peter is one of the highlights of my career. I learnt many things on both the professional and personal level. I know it might be a cliché, but under his leadership, there was good and warm spirit among the crew. Sometimes, I attended shooting even if I didn’t have any scenes on that day.

What are your upcoming plans?

Yeah, there is a project I’m working on but I can’t speak about it now. Actually, I’m very picky when it comes to cinema because the film industry is a prominent matter to any actor. It’s engraved in people’s mind. To put in the simplest form, I may ask you how many times you have watched ‘El Nazer’?  Indeed, dozens of times and it won’t be forgotten in contrast with any TV series.

After becoming an actress and working in this field, do you think the negative image of the filmmakers and the artists still exists in our society?

Sadly, yes it’s still there but actually I don’t face it too much, because most of my friends work in the same field. But of course I’ve met those who regard my profession as inappropriate. One day, I was heading to the location, carrying my suit case, the building janitor looked at me disapprovingly and said ‘where are you going Miss Sarah? Girls aren’t supposed to leave their parent’s home.”  (She laughs).

Who was your first movie crush?

Which foods make you gain weight?

Nothing. I have a very fast metabolism, I can lose weight breathing. (She laughs)

Give a name for each: