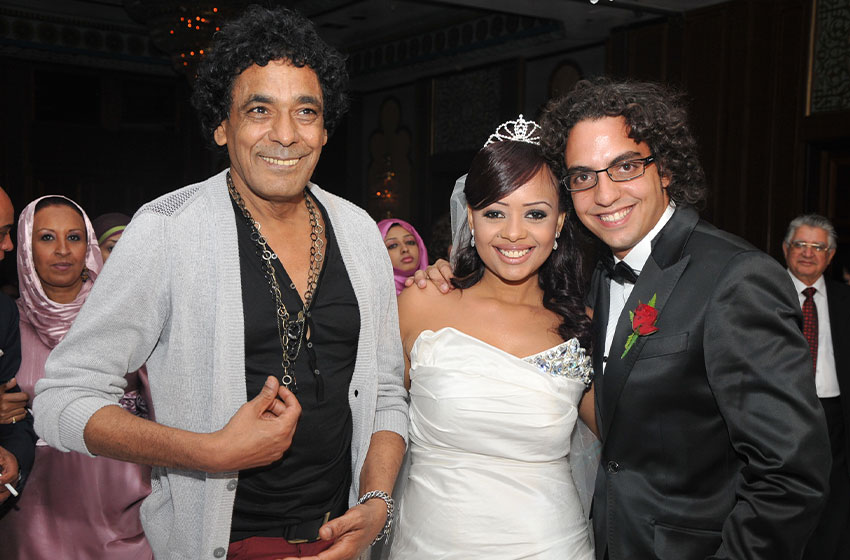 There’s no better way to start your day than by having a chat with the loveliest pair, Marwan Younis and Daliah Galal, whose delightful sense of humor lights up the room and instantly boosts your mood. After countless chuckles and engaging inside stories, we asked the power-couple how they manage to go through thick and thin together while maintaining the fun in the relationship, here’s what they told us!

When did you know he/she is the one?

Marwan Younis: I knew she was the one when I asked myself: “Do I want to wake up every day to her face?” the answer was “yes”. I knew I could love her when she was happy, upset, depressed, ill –just unconditionally. Not to mention the numerous things we have in common. She’s just a woman one could easily fall for.

Daliah Galal: I’m naturally a person who loves to plan everything. I have to acknowledge what I plan to do five or ten years ahead of me. But when I met Marwan, he actually made me fall in love with him within a week, believe it or not. In just a month I knew he was the one I wanted to marry and spend the rest of my life with. This was insane for me as someone who thinks they know exactly what they want to do years ahead of them. We fell in love through music. We used to play together in a band before he tricked me into marrying him and having kids and all that.

How did he propose?

Marwan Younis: I wrote a song for her called “My Wife”. I took her to Cairo Jazz Club because that’s where we bonded the most. It was essentially a surprise, only her sister knew. A friend of mine was the DJ that day and it was Shady who was running the club, so I asked him if I could play the song in the midst of their set. I sang the song live before I got down on one knee and proposed.

Daliah Galal: The funny thing is, I actually forced him to propose. We had already been engaged and I was wearing my ring, but I thought everything happened so fast and I was like: “But where’s my proposal?” However, the timing was a total surprise for me.

What’s your secret to a good marriage?

Marwan Younis: Communication and understanding. Daliah and I rarely ever fight to say the least. We’re able to communicate everything that bothers each of us about the other without taking things to heart. You just need to understand that you’re married to an important woman in your life, not someone to serve your needs. You need to eliminate the sense of competition; it’s okay for her to be up and working all night, for her to make more money than I do, as long as we know how to empower and encourage each other –that’s the secret.

Daliah Galal: I agree that communication is the core basis to all relationships generally, and marriage especially, but I also think space is extremely important, especially for men. If you tone down the sense of neediness he will come back to you. Thursday for Marwan is ”boy’s night”, which entails that Marwan is off limits no matter what happens. Even that time when I was having contractions when I was pregnant with my first baby, I called up his brother for help and asked him not to tell Marwan because it was boy’s night. Another thing I would like to add is that a marriage needs support. What I do is not conventional but Marwan is extremely patient, tolerant, and very supportive of me and what I do. I wouldn’t be here today without him.

What was the most awkward situation you’ve ever had together?

Daliah Galal: When I had my first baby, I was in the natural after shock of “What just happened to me?” but eventually I wanted a second child while Marwan did not. I nagged him into consenting and eventually, I got pregnant and he was in Dubai when I found out. I what- sapped him a picture of the pregnancy test while he was working and he was like: “what’s this?Is it positive?” and I responded saying it would be pointless to pee on a stick and send it to him for fun. It was pretty much our most awkward situation.

Marwan Younis: What exacerbated it for me is that I have always wanted a baby girl. I thought this second try would get me a girl and I kept dreaming of baby girls before she messaged me weeks later saying “It’s a boy! I’m sorry.” [laughs]

What is the best gift he/she ever got you?

Marwan Younis: It was our anniversary and she told me she was taking me out to a hotel for us to chill by the pool. Her sister was driving and I thought the route looked different, until we were taken to the airport and Daliah actually took me to Lebanon. There wasn’t a pool, though.

Daliah Galal: The best gift he got me was our babies. He also got me my first professional camera, which I really cherish.

What’s the worst thing you did to your in-laws?

Marwan Younis: Perhaps the worst thing I do is that I do not see her as much as I should. Otherwise, I have great relationships with my in-laws.

Daliah Galal: It’s just the usual stuff that includes how they don’t see the kids as often as they want to. I’m quite proud of how we’ve been married for six years and I have never hosted one of those awkward family-get-together parties at home. I have chinaware that’s collecting dust because I don’t even know how to cook.

What’s one thing that drives you crazy about her/him? How do you handle it?

Marwan Younis: I know we both have our incorrigible flaws, but if I have to name one thing, it would be how loud she is on the phone. We’d be sitting in an Uber, and both the driver and I would want to throw her out of the vehicle. Another habit that bothers me is how she’s not very punctual and I handle it by setting Daliah-timing. If she tells me to get ready, I wait until she’s applying her final touches of makeup and I begin to dress myself. I’m usually done before she is.

Daliah Galal: Two things: The first is his propensity to get moody. People keep telling me that it must be fun living with a comedian, but they don’t notice that his comedy is based on rants. So imagine those complaints without the comedy! I handle it by just trying to avoid doing anything that would set him off. The second thing is that he’s hot-headed so he sometimes unleashes that on our son. Our son is just a kid with hyperactivity like any other, which sometimes doesn’t go well with Marwan if he’s just woken up. I handle it by pointing it out, besides my secret plan of running away with the kids one day of course.

Who’s usually the first one to make up after a fight?

Marwan Younis: We’re grown-ups who have different styles of fighting. Personally, I cannot express my feelings and have closure at the end of the conversation like Daliah prefers, but we compromise by taking breaks in-between those arguments. The first one who makes up after a fight is the person who did the other wrong and it’s always received positively.

You’re in the doghouse. What’s the fastest way of getting out?

Marwan Younis: I just say “Hey, you wanna jam?” Because she loves music so much, no matter what I did, she’ll just forget it and she’ll be down for jamming. Or candy! She loves candy.

Daliah Galal: I just start talking about random topics, and he notices but I just keep at it. If I have to confess, I try to make it seem like it’s going to be massive, as if I cheated on him, or as if neither kids are his, but then I go “I spent lots of money on booking a reservation” and he is compelled to take it well because he has previously imagined the worst case scenario.

Marwan Younis: In winter, it would comprise a blanket and a good film. In summer, it would include dancing on the beach barefoot to the moonlight.

Daliah Galal: We both love to travel, it’s the perfect escapism. So yes, a beach night under the moonlight, but maybe in Thailand or something.