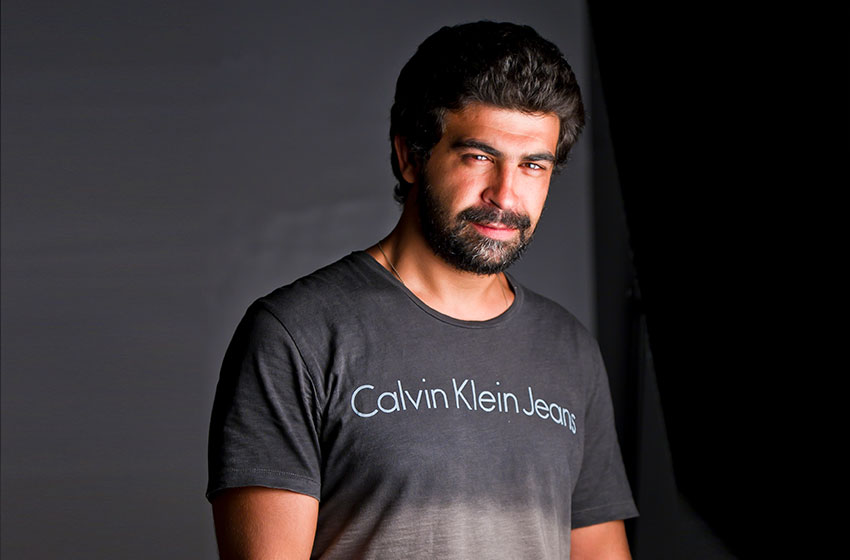 Sowing the Seeds of Cinematic Artistry

Thanks to his shrewd acumen and years of pursuing his long-life dream of becoming a writer, Mohamed Abdelmoati has certainly managed to catch the crest of the cinematic wave with the raging success of his scripts for The Legend, Bitter Sugar, and The festival. The emerging script writer and journalist has spilled the beans to (in)sight about his looming passion for cinema and his path to success.

1.How/when did you realize writing was what you wanted to do for a living?

I have been writing since I was only 10 years of age. Back then, I excelled at writing scholastic essays and outdoing all of my classmates when it came to writing. My teachers were always astounded by my writing style; when the topic about the 6th of October War, for instance, I would compose the essay from the perspective of a missing soldier to convey a humanitarian concept. I would write about typical simplistic topics, like pollution, portrayed in a clever storyline with a moral. This is when I realized that writing is what I’m good at, and that I should make it my profession. What helped develop my skills was my passion for reading since I was a child; I was always keen on being updated with everything, so I read every newspaper and hung out with older people until my knowledge outgrew theirs. I read works by dexterous writers whom I deemed my role models like Naguib Mahfouz, Anis Mansour, and Youssef El Sebai. My passion for cinema was topped off with a fervour for critiquing; I would constantly picture plot modifications of whatever I’m watching. So it was clear from my childhood that I would become a writer.

2.Do you take into account market trends or do you just write what should be in the market?

Let me first familiarize you with my work experience: I have been a journalist at Al-Ahram Newspaper since I was but a college student, and to me Al-Ahram is an esteemed establishment that serves both fields of journalism and culture. My first published novel was ‘Mawaleed Haga W 80’ (Born in Nineteen Eighty Something), and then I wrote the film Al Mahragan (The Festival), the film Sukkar Mor (Bitter Sugar), and then Al Ostoora TV series (The Legend). Before these, I wrote no less than seven films that I love, and some of them were sold, but none were produced. Now back to your question, at first I did not take market trends into account, but nowadays I have to consider the amalgamation of my direction and ambition as well as the market trends because I cannot be disconnected from the market. After all, it is an industry; producers have to make money, and by time and experience I started to consider the market needs. That’s why the previously mentioned films were never produced, because I did not bear the trending cinematic fads in mind.

3.What is the TV/Cinema industry missing when it comes to scripts and plots? What do Egyptian scriptwriters miss in terms of dramatic plots?

In my opinion, the industry lacks good scripts based on real historical events. I see that we are missing epic films like El Naser Salah El-Din (Saladin the Victorious), or the true story of Omar Mukhtar in the international film Lion of the Desert. I see that we have great shortage in historical films, although Egypt’s heritage covers a wide-range of world’s history, and more than any other country that is known to make good historical films. Egypt has a great heritage that has not yet been put to good use in terms of cinema. The 6th of October War is the simplest and most recent proof of Egypt’s extensive and diverse history, and I do not see that we have made any films till now commemorating such a heroic and victorious event that could be employed in making a brilliant documentary, while the West documents their slightest military operations, which are nothing compared to the 6th of October War. As for Egyptian scriptwriters, I actually see that they don’t lack much; we have first-rate and talented writers; we have ambitious young writers with great potential; we have diversity, and writers do what they do best in their area of expertise. So no, I do not see that we lack calibers or talents, we actually have many, and the perfect example for this is the Egyptian TV drama scene only seems to drastically improve on a yearly basis.

4.Do you use sequences and outlines or just plow into it until you’re satisfied? (Explain your workflow)

I have to first come up with a general concept before I begin putting my ideas into words. I am a very organized person when it comes to work, I have to set clear outlines; I have to know very well the significance of each scene, and identify which scene needs to be stronger and more appealing. I have to set a clear framework from the very first beginning to be able to write. I have a board at my house where I plan for what I am writing. And I do not write using one technique, every story guides me to a different technique because every story has its own nature, and has to inspire my plot structure.

5.What is the most important aspect of crafting a great character?

Well, the most important aspect that would appeal to viewers is focusing on all the humanly sides of the character, and on the good and the bad, making sure there is no character that is portrayed utterly corrupt or utterly good; they are human beings. I don’t like works that portray a villain who is completely evil; nobody is a hundred percent evil, and no one is totally noble; we all have a good side and a bad side, but with some extents that vary from a person to another. To me, the character that people would like or relate to, or what makes a character more realistic, is when viewers can clearly see that the good side and the bad side are both evident in the character.

6.Where or when does the moment of inspiration hit you? (On the street, in the shower, etc…)

There are only two places that I feel comfortable writing at: My house or at this nice quiet small coffee shop where I feel relaxed. To be able to work, I also have like some rituals; I have to be in a clear state of mind so I usually start working after I have just woken up and feeling fresh to be able to get the work done. I usually write either in the early mornings or late at night. But I believe that inspiration is a God-given matter, inspiration does not arise in a moment, it grows by time; when a story keeps occupies my thoughts, ideas start building up gradually until they crystalize.

7.What books have you read that have helped your writing?

I studied everything at the New York Film Academy’s Screenwriting School, and it has helped me plenty in building plots. I use a technique called ‘the destruction of the temple’, which means that I do not rely on books when I write, because if I did, I will repeat the structure for every plot. I sense a different approach for each film I work on There is a rule that says an event must happen after the first ten minutes in a film, and this is one of the techniques that lots use, but I do not feel comfortable with it. In my opinion, an event could take place within the first 30 seconds in a film, depending on each story. However, I learned everything I needed to know, and I merged it all with my own views and my own experiences to apply it.

8.What script are you most proud of writing and why?

I am proud of everything I wrote, all four works, the novel, the two films, and the TV series and I do not prefer one more than the other. However, Bitter Sugar and of course the groundbreaking success of The Legend are very special to me. Bitter Sugar has always given me a special state of mind as a writer, and I thank god that it has been critically acclaimed and won the best film of 2015 along with participating in seven international film festivals. The Legend has also flown up the arch of success where it reached phenominality. So these two achievements are so close to my heart.

9.Is there a script you sold that did not turn out the way you intended? If so, what was it?

Not at all. I have never sold any work that I wasn’t completely convinced of. I think success is God-given, but I also have to do what it takes and make use of my talent; I have to be fully dedicated to what I do. So I will never sell a script that I am not convinced of.

Writers who inspire me include Naguib Mahfouz, who is one of my favourites. As for films, I like to watch Alejandro González’s films, and Martin Scorsese’s.

11.How is scriptwriting different from writing a book? Which do you prefer doing?

I like doing both very much, but scriptwriting gets me more enthusiastic. While working on a script I feel more enraptured because when writing a novel I can only imagine the characters, whereas a script will be manifested in real characters with flesh and blood, which gives me more enthusiasm and positive energy.

12.Do you have any goals you have yet to achieve? What are they?

Definitely! It is not a matter of what I have not achieved yet, but more of a hope to keep on writing what I’d love to watch, which can be more challenging that it seems.

13.What sort of stories or films excite you and why?

I like all kinds, and I watch various genres, however I like Alejandro González’s films because I sense real life and true kindness in them. What I really like the most are humanitarian stories; I feel them; they move me and solidify my compassion in a world that has been desensitized. There’s nothing quite like regaining faith in humanity through works of that sort.

15.Tell us a fun fact about you or a funny situation that isn’t related to writing!

There’s this spooky thing that often happens to me, and it is that when I think of any person, I meet them! If someone who has not called me in five years happens to cross my mind, they would shortly after call me all of a sudden. A situation that occurred to me on set shooting The Legend was with Mohamed Ramadan, who is a dear friend of mine. When Mohamed plays a role, he instantly transforms into that person and it sometimes takes a while before he snaps out of it. So when our conversation was interrupted to shoot a scene as Rifai and he came back to continue our talk, I told him I couldn’t talk to him yet because I felt like I was talking to Rifai, not Mohamed, and I seriously did. It’s one of those moments that he and I laugh at until now.

14.What would you advise aspiring young writers?

Read a lot; watch a lot of films; write constantly, and always write about what you love because that’s what you will become. If you do not have your own identity as a writer, you will never be successful, so always write what you believe in. You must also identify the message you want to deliver before you write; if you skip this, you will end up with no story or subject matter.