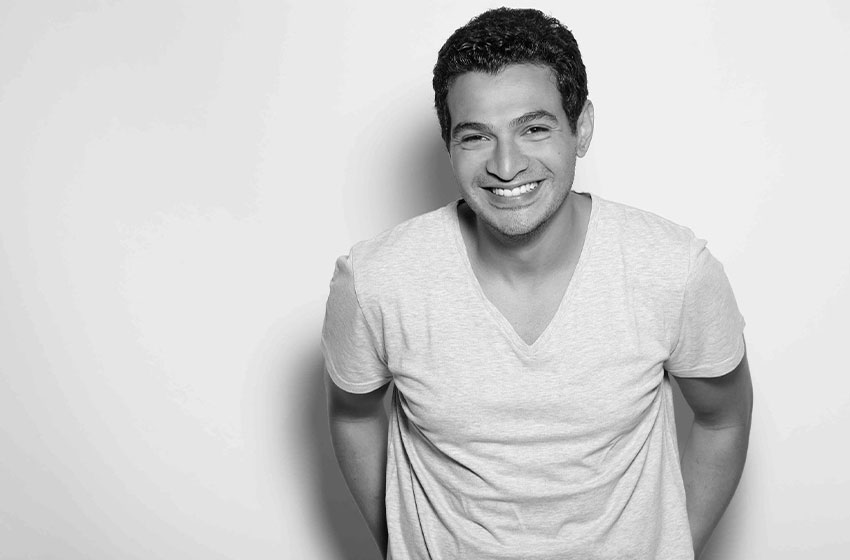 Behind his buoyantly lively interviews with international superstars and annual covering of film festivals is a surprisingly unostentatious man, who finds his greatest joy in reading a good book amidst the quietude of nature. Famously lauded as the only Egyptian television host who features international icons including Luis Fonsi and Claudia Clardanale on the ‘OnEnt’ network, Sherif Nour El Din has narrated to us his story in the media starting day one. Check out what he told us!

How did your career in the media start?

I’ve always known that this is what I wanted to do for a living, even before I majored in Broadcasting in Mass Communication. Before I graduated, I started my training early by working for Teen Stuff Magazine and Nile Variety, on which I’d host a weekly segment in the show ‘Eshar Ma’ana’ (Stay Up Late with Us) about everything internet-related. In Teen Stuff, I ran something called ‘The Interview Club,’ where I’d constantly interview celebrities. This opened up doors for me and led me to getting my Nile Variety gig. I had interviewed Salma El Shamaa and Khaled Abol Naga, who both managed the channel at the time, and they offered me the job. This got me working before I had even graduated. When I got my degree, I came across a job opportunity through the college bulletin to work at a production house with MBC. I worked as a reporter, producer and script writer and did various other things like dubbing Mega Man and script writing an Ahmed Al Fishawy show.

You have worked your way to television hosting but never abandoned the radio. Why is that?

I would never leave the radio behind because I have always seen the difference between the two platforms akin to the difference between cinema and theatre. Through the radio, you have a direct contact with your audience; you interact with them wherever they are and you get to see their reactions in an instant; it’s much more mobile than television. On top of this, Mega FM is like my home now.

Are you interested in a future career shift to acting?

I’m always intrigued by anything art-related, but I mainly took acting courses to work on my body language. My problem is that I’m very animated; I use my hands and too many gestures constantly while I’m speaking. So these workshops helped me control my muscles, nerves and overall body language. I also took orating courses with Eman Younis, who’s considered the best in her field. So generally speaking, these courses were taken to enrich my performance, but at the back of my head, I know I’d be open to trying something new if the chance came up, but not necessarily because acting is a profession I seek; it would only be a means to explore and discover more about myself.

Tell us about your experience with El Gouna Film Festival and hosting ‘Sherif Fel Mahragan.’

‘Sherif Fel Mahragan’ is a series I started on both television and Mega FM. I covered Cairo Film Festival two years in a row on Nile Cinema before I began working for ‘On TV,’ where I covered El Gouna Film Festival this year. GFF was absolutely stunning and very prestigious. You could probably tell how excited I was on screen because it truly was brilliantly organised. As hectic as it was, it was definitely worth it.

You were the first and only Egyptian TV presenter to interview Luis Fonsi. What was that like?

Interviewing Luis Fonsi was an out-of-this world experience. Not just because ‘Despacito’ gained international recognition, but because he’s a huge star in Latin America who has only recently experienced his international break. After ten years of receiving Grammy awards and having done duets with stars like Christina Aguilera, he’s only now gaining international recognition. I had to know how that made him feel. In person, he’s so down-to-earth and humble, which made him even more appealing to me and the viewers. It was a lesson to me: no matter how much you work, you never know when the big break will come – every single experience you have accumulates and incrementally adds to your impending breakthrough.

You got to interview many an international star. Do you have a favourite?

I consider myself very lucky to have a career through which I can meet international stars. I have self-trained by learning from icons in the field like Raya and Ryan Seacrest, both of whom I consider my idols and still learn a lot from until today. This is what I try to deliver to my audience: good content with an international calibre.

So far, I think the closest interviews to my heart would include the one with Forest Whitaker, who’s very humble and humanitarian with a belief that he has a purpose no matter where he ends up. And of course, it was an absolute honour to interview Claudia Cardinale, the Italian international superstar.

With such a busy schedule, do you have any time for yourself?

I make time for myself. Through my experience of self-training, books like ‘7 Habits of Highly Effective People’ have helped teach me to make my own free time no matter how busy my schedule is. I always disappear on the weekends; laying low and relaxing to give myself a chance to