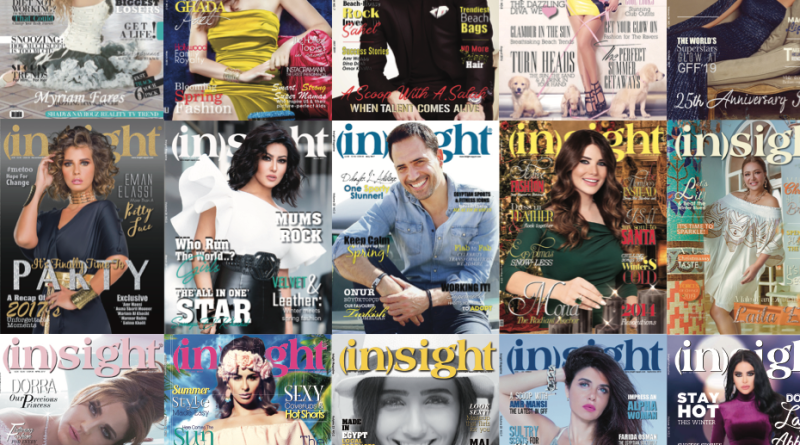 In this issue, we are celebrating our 27th anniversary. Over the previous 27 years, we interviewed several celebrities who glorified our magazine’s cover. In this issue, we will highlight some of these dazzling cover interviews.

Layal Abboud is a Lebanese folk singer and dancer who sings pop in several dialects such as Khaleeji, and others. In this interview, Layal told us that she loves to gain inspiration from her son; despite her busy life, Layal is an amazing mother who loves to cook and prepare family gatherings. “As you know, I’m very close to my family and this constant work pushes me away from them,” Layal says.

Alaa Lasheen is an Egyptian TV-host, movie-critic, and producer. She presented social artistic programs, such as ‘Alou We Olna’ (They Said, We Said) and ‘El Mirayah’ (The Mirror). Alaa Interviewed a plethora of celebrities and gained considerable experience. “In ‘Alou We Olna’, we endeavoured to let the audience interact with the guests by discovering their life secrets, especially the ones that guests didn’t speak about before in other programs.,” Alaa indicated.

Since she was a young child, Rania Mansour has always been a lover of acting and art in general. She acted in the movie Shabab fel Mamno’ (Forbidden Youths) marking the debut of her acting career. She turned heads after performing in Aswad Fateh (Light Black) as a cancer patient. “People always have this misconception about actors’ lives. Actors don’t always have a whale of a time; we suffer from depression and daily problems like all people,” Rania stated.

The stunning actress talked to us about her life, her career, and how she manages to remain on top of her career despite being a mother of four boys and a girl. “I feel that by being calm and thinking probably, everything will pass. In the past, I used to see everything as a big deal, but now, I believe that any problem has a solution or a way to solve it. I have become wiser now,” Ghada revealed.

After just five years in spotlight, Mai Omar was awarded the ‘Best Youth Actress’ title for her astonishing talent on screen. Laughingly, Mai says that although she is always up to her eyeballs trying to be strict with her children, it always ends up the other way round. Omar also talked about her series Rayah El-madam (Keep Your Wife Happy( as a challenging role for her.

Insight met the gorgeous actress to discuss the ordeal of her revealing CIFF dress and how she dealt with it. “The dress appeared more revealing on camera than I expected it to be because of lighting and lining” explains Rania. Regarding her divorce from the businessman Tarek Azab, Rania said that she is not on the same page with the notion of marriage.

Like mother like daughter, Laila began her career at the age of 7 performing in several radio programs like, ‘Asafeer El Gana’, and ‘Fatafet Al Sokar’. Then at the age of 15, she participated in a play called ‘Taman Setat’, directed by Galal El Sharkawy. Laila reveals that her mother’s work as a radio host opened her eyes to the beauty of art.

Overwhelmed with all-consuming passion, Ahmed shifted his career from soccer playing to art, wending his way as a song-composer. Ahmed’s advice to uprising actors is to watch movies and tv series a lot, attend workshops, and acquire more than one language. Ahmed is also a professional athlete; he always tries his best to stay fit and even gets depressed if he doesn’t train.

How amazing it is to have fans across the globe: Razan stayed in London for ten years and returned to MBC in Egypt afterwards, which expanded her fan base. Razan passionately told us about her son Ram and how he is proud of his mutli-sided identity as a British, Lebanese-Egyptian young man. Razan also mentions that she doesn’t regret giving up Scoop with Razan to Raya.

Dorra has told us that she loves to pick up the roles that expose different personalities from hers to people. She likes to choose roles that encompass cinematic values and personas worth embodying. “Coming out here to Egypt on my own when no one here had heard of me, with no connections whatsoever to help me is my biggest accomplishment” says Dorra proudly.

Before she goes out on stage, Haifa loves to choose her outfit according to her mood after her hair and makeup are done. Despite having her own stylist, she always chooses her outlook on the spur of the moment. “A good man will make me feel good, respect me, and put me first.’’ This was how Haifa depicted her dream husband.

Hend is a multifaceted persona; she is a mother, lawyer, goodwill ambassador, and one of the most talented actresses of our time.  Even after her phenomenal success in ‘Algazeera 2’, she thinks she is not there yet. “I am always learning from every director and actor I work with. Now I try to choose the kind of roles that can present me to the audience in a different way.”

When asked about the closest roles to her heart, Somaya mentioned “Raya & Sekina” because it was very successful in addition to “El Hakika wel Sarab” because it carried a very important message for families. Somaya revealed to us her three golden tips for weight-loss, which are “No dinner, loads of water, and lots of sports.”

Mai always wished to work with screen-legend Mahmoud Abdel Aziz and achieved her dream in ‘Gabal Alhalal.’ “He is a very humble person who knows how to entertain the entire crew” says Mai, depicting Abdel Aziz. In Mai’s opinion, the syndicate needs to dedicate a different season for drama besides Ramadan that is witnessing an annual presentation of more than 60 series, resulting a huge injustice for numerous other series.

Having starred in Hollywood movies including ‘A Hologram for the King’ with Tom Hanks, Dhafer is always ready to seize opportunities that get into his way. Working as an athlete, model and actor, Dhafer reveals that modelling was not his passion in comparison to acting and football. For Dhafer, a compelling role is a one that challenges him by introducing new writing techniques that let him explore beyond his comfort zone.

Nicole’s life has encountered a little bit of change since she married Youssef El khal as marriage has added stability and intimacy to her life. The couple were dating for four years but then got separated. They became friends for six years and started dating again until they tied the knot. Saba says that she is “okay with plastic surgery if needed but not as a way of killing boredom.”