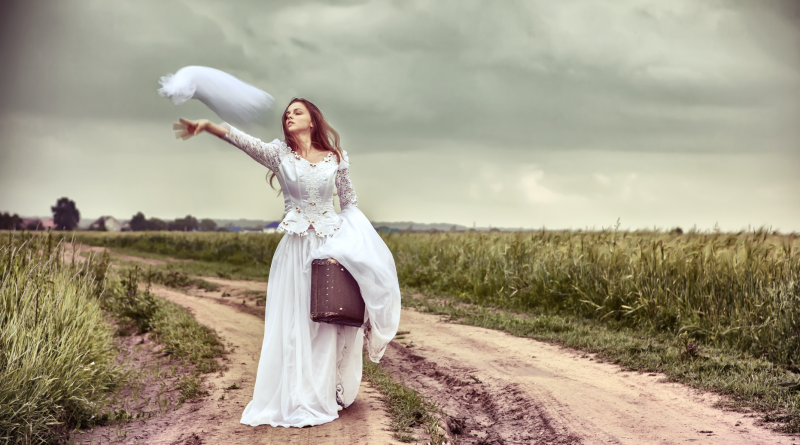 In her short interview with Girls Space, Egyptian actress Mona Hala gave her best shot about how girls in the Middle East suffer from an onslaught of social norms portraying marriage as a necessity and a model for the perfect life. The interview went viral on social media as several girls related to Mona’s words. Unmarried girls all over the world go through numerous piercing challenges, from being pigeonholed as traumatized children to being perceived as heartless and ego-centric beings devoid of womanly tenderness! Undoubtedly, marriage is a great experience that gives one’s life a meaning and a reason to live for, but, no offense, this doesn’t mean that marriage is a standard rule that everyone should follow. And, no, girls who don’t walk down the aisle don’t end up being lonely, embittered old women who die lamenting their lives. That’s why, we decided to give a shout-out to all brave girls who rose to the challenge and refused to be governed by traditions. Here are five  conclusive reasons why it’s totally fine not to get hitched.

Marriage can Try the Patience of a Saint

If you think that marriage is not for you, yet you are fed up with your family’s nagging pressure to marry, don’t think that your anxiety will stop by marriage. We hate to break it to you, but marriage is a crazy organization full of stress and anxiety. ‘When is the wedding? What about babies? What about your kids’ school? What about the house, the car, your old friends that your husband doesn’t like?’ Don’t ever think that getting rid of your in-laws’ judgement and unsolicited advice is a piece of cake. Marriage is indeed full of challenges, and many girls can’t endure all this stress. So, if you want our advice, don’t bite off more than you can chew.

If you have soaring ambitions regarding your education and career and believe that marriage won’t hold you back, we beg to differ. We know that many people espouse the “have it all” theory, and there are multifarious accomplished married women on earth. However, these women are still a minority. Statistics reveal that marriage often translates to a closing down of opportunities: According to Researchgate, only 1/5 of early-wed girls all over the world continue their study after marriage. This visibly emerges from the questions asked to parents in household surveys as to why their daughters dropped out of school; marriage is often the key justification. Marriage also squanders the opportunity of acquiring a scholarship, MA, or a PhD because these biggies require a hell of a time. Even when it does not lead to a discontinued education, early marriage impedes one’s career. We bet that you know an example or two of girls who screwed up their early career because they spent almost all time and energy on the relationship rather than on the career. Married women usually fail to acquire prestigious jobs since they become obliged to search for jobs only in their locale to be near to their kids.

The ultimate Independence and Freedom you will enjoy

“ I want to be this person who can pack up and travel in a minute.” That’s how Mona depicted the freedom that non marital lifestyle gives. Unmarried girls are always free to do whatever they like whenever they want. No responsibilities will hold you back or impede your plans. It is generally assumed that a married person will always have someone – for better or for worse. However, even if you are not married, you can still have people for better or for worse, friends to rely on, relatives to love, to laugh with, to confide in, and trust. The only missing thing is the burdens you will carry and the compromises you will have to make. You would be free to hang out with friends, travel the world, raise lots of pets, meet strangers, work for social causes, swim in the ocean, or play the violin… The list is endless. Most importantly, you will have ample time and money to give a hand to the impoverished.

Marriage is akin to Diving into Dangerous Waters

When it comes to marriage, your mind has to be fully engaged as well as your heart since you won’t suffer alone if you made a wrong choice. Mismatches have been the cause of numerous psychological problems that wreak havoc on the entire world. Going back to Mona Hala’s interview, she hit on this issue when she said that many people marry when they are head over heels in love, yet they end up getting a divorce. This is because they only relied on their temporary feelings without thinking rationally about whether they would be able to live forever with their spouses or not. Living the wrong life leads to a wide range of frequent marital battles, which causes children to suffer from paranoia and other disorders.

You can Always Have the Ring

Marriage shouldn’t abide by a certain age. Marriage is forever, so don’t let your age prompt you to make a dash that will leave you lamenting for years. Even if you can no longer have children, you can still adopt and fulfill your dreams. So, why leave the party at 8 pm? We aren’t advising you against marriage, but to weigh your choices carefully and never feel obliged to marry at a certain time. Take your time to think and fulfill your career dreams before you decide to walk down the aisle. Rome wasn’t built in a day. Don’t succumb to people who call unmarried girls, spinsters. Yes, people can put you on a very low rung of the ladder, but who the hell are they? As Louisa May Alcott says, “better be happy old maids than unhappy wives, or unmaiWdenly girls, running about to find husbands.”