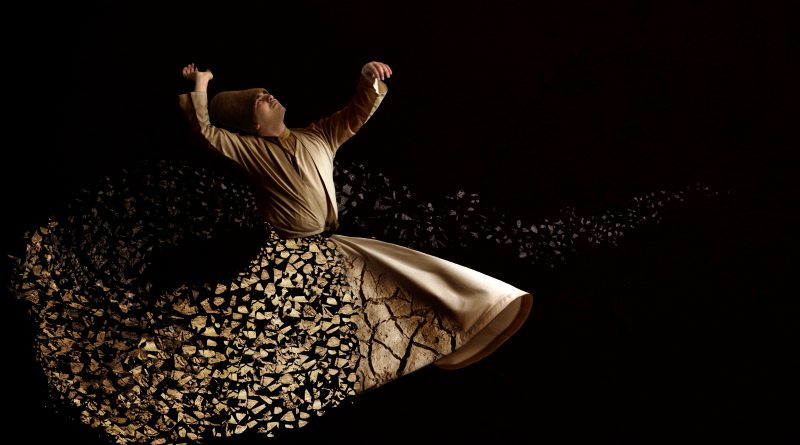 In the Persian empire from the 11th and the 14th century, a current of mystical awareness surfaced among Sufis, namely poets. Jelaluddin Rumi (1207- 1273) was one of the most significant Muslim Sufis of the era that wrote magnificent heart-warming poems on the love of Allah (God) and mysticism. Sufis refer to him as the Qutb (Pole) of Love. Rumi’s mission on earth was so simple and so significant at the same time. It was to tell people that every man has a capacity to encounter The Divine and that the meeting point is only man’s heart.

Rumi wanted to drench the entire earth with love. His religious teachings were quite unique from other teachers at his time since he taught people to fall in love in a way that makes them free from any restrictions. He taught people that to get to the Divine centre of love is to die before you die by letting your whole being dissolve in love. “The wailing of broken hearts is the way to God,” Rumi remarks.

“You are the master alchemist.

You light the fire of love

in earth and sky

in heart and soul

Rumi was born in Afghanistan in 1207 to a family that was escaping from the Mongol armies of Genghis Khan. His family settled in Konya after fleeing to many places beforehand. In 1244, when Rumi was 37, he encountered Shams Tabrizi who was about twenty years older than Rumi. Shams became Rumi’s mentor and most beloved friend. They started what Sufi people call ‘Sohba’ (mystical conversations), developing a myriad of stories, poems, and teachings. After four years, they separated when Tabrizi disappeared. Some oral stories indicated that Tabrizi was murdered by some of Rumi’s jealous disciples; however, the reasons behind Tabrizi’s disappearance are not clearly known. What scholars know is that Rumi grieved and lamented his loss a great deal, as the poems showcase.

After being deprived of Tabrizi, Rumi spent his last 26 years composing poetry and speaking poetry spontaneously among people. Scribes used to write after him, and Rumi used to revise and edit the manuscripts. The enigmatic part of Rumi’s life is his companion, Shams Tabrizi. It is narrated that before the duo met, Tabrizi had knelt and asked God to give him a friend on his level of spiritualism. Tabrizi heard a voice saying, “what will you give,” to which Tabrizi responded “my head”. The same voice finally replied saying “Jelaluddin of Konya is your friend.” Tabrizi mentioned later that he came across Rumi when Rumi was ready to receive the secret.

When they met for the first time, Tabrizi took all the books of Rumi and threw them in the fountain, telling him “now it is time to live what you have been reading and talking about.” Scholars were astonished by the two men’s mystical awareness as they expressed the deepest longings of the human heart and his searching for the Eternal. The love poems of Rumi are replete with such longings.

When Rainer Maria Rilke, the renowned mystical poet of the twentieth century visited Cairo in 1910 and met some of Cairo’s Sufis at the time, he said, “with Rumi, the scale is shifted, for this is the mystery of the deeply kneeling man.” One of the most significant modern works that shed ample light on Rumi and Tabrizi was Elif Shafak’s novel ‘The Forty Rules of Love’. The novel tackles the friendship of the two Sufi companions and how Tabrizi transformed Rumi into a Sufi by teaching him the most essential forty rules of love.

Tabrizi taught Rumi that how people see God is governed by how they see themselves. If God evokes fear and sadness, this means that the mind is suffused with such negative feelings. This is the first rule of love that man should look inside himself to know what prevents him from encountering God. Truth is only reached through the heart, not the head. Therefore, man has to follow the voice of his heart. Tabrizi also indicates that God can be encountered in every place in the universe and shouldn’t be confined to any limited place no matter how religious it might be, and the most admired place that God dwells in is the heart of man.

Tabrizi exhorted Rumi to abide by love rather than intellect since man’s intellect is always cautious and selfish, whereas “love says: Oh, never mind! Take the plunge.” The heart is the place that all ecstasy can be, and broken hearts comprise treasures. In the novel, Tabrizi highlights that most of our humane fights occur due to verbal misunderstandings. Therefore, never take any words by their literal meaning and leave a space for errors and lack of understanding. When it comes to true love, language must be overlooked.

Tabrizi’s rules tackled the difference between loneliness and solitude. Being solitary doesn’t mean you are lonely and sad. Conversely, the greatest things in life come to us in our solitude. However, Tabrizi mentions that to accomplish his mission in life, each person has to find a friend whom he can trust. Tabrizi also makes it clear that hell and heaven are present here and now as “every time we fall in love, we ascend to heaven. Every time we hate, envy, or fight someone, we tumble straight into the fires of hell,” Tabrizi states.

Tabrizi explains to Rumi that true love is about being grateful in the hardest of times. No matter what life brings to you, be thankful and wait for God who will open an unexpected door for you. How easy it is to be thankful when everything is fine? Tabrizi defines patience as “being able to look at the thorn and see the rose, to look at the night and see the dawn.” Those who love are always patient and optimistic because they know that God is always there for them. True mysticism is about travelling within the self; this is where true knowledge can come from, not from travelling the earth.

How much we respect our human differences is a tell-tale sign of how much we love God since God chose to create us differently: “No two people are alike. No hearts beat to the same rhythm. If God had wanted everyone to be the same, He would have made it so,” Tabrizi explains. Sufis do not judge other people on how they look or who they are. A true Sufi always sees people through his inner eye. Tabrizi teaches Rumi that without pain, there is no transcendence. Such as the mother brings her baby with pain, the same happens with the human’s new self. He indicates that looking for love will always bring you good. No one looks for love and remains unchanged and untouched by its fire.

Besides, Tabrizi tells Rumi to always remember that true teachers never seek people’s attention and always love to disappear in the crowds. “True mentors are as transparent as glass. They let the light of God pass through them.” One of the most significant rules that Tabrizi puts is that God’s love is about embracing the changes that life brings, for maybe what you heed the most becomes the most precious thing that your heart desires. Tabrizi stresses that without loving God’s creatures, we can never claim that we love God. “You can purify your body through abstinence and fasting, but only love will purify your heart,” says Tabrizi.

All in all, to tackle all the rules and teachings that Tabrizi stated or to describe the impact of Rumi and Tabrizi on the Middle East and the entire universe will need piles and piles of paper. We hope that the synopsis we presented will encourage you to read more about Rumi, Tabrizi, and Sufism.