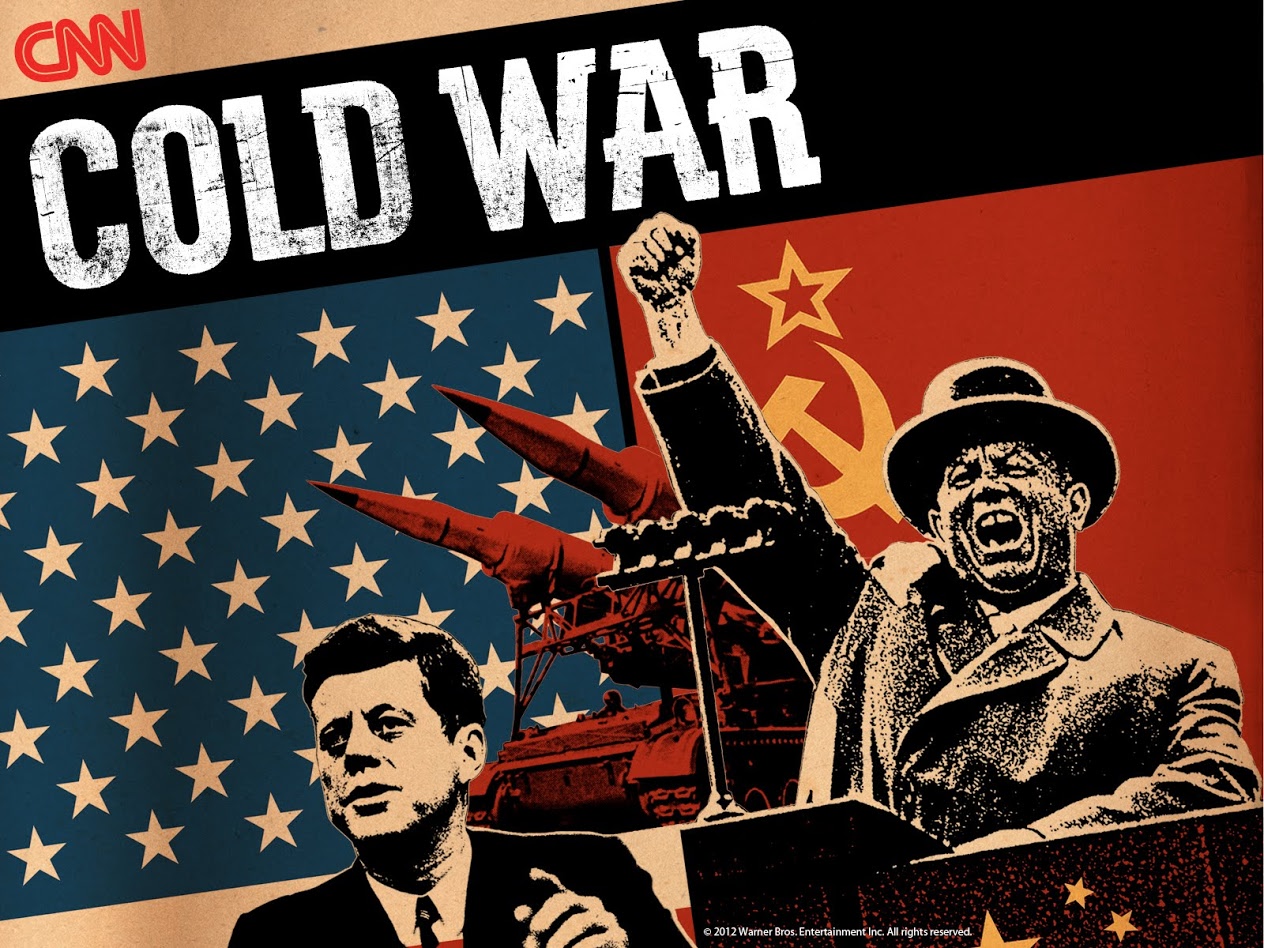 The Cold War was one of the massive historical events that reshaped the whole world. It did not only split countries but families due to the conspiracy theories it advanced. Nuclear catastrophes were expected to happen at any moment, and everybody was wary of treachery. The Cold War still maintains its imprint in a myriad of world countries nowadays. To exemplify, China and North Korea still adhere to their authoritarian form of government, which was established in The Cold War. With an abundance of nuclear weapons, ready to destroy whole nations, the whole world still depends on the peaceful end of this chilly war. This said, The Cold War is most importantly about the ascent of the USA as a world hegemon.

Bernard Baruch, political consultant and advisor of US president, coined the term “Cold War” in 1947 to describe the uncomfortable relationship between the two world major superpowers: The Capitalist USA and The Communist Soviet Union. “Let us not be deceived; we are today in the midst of a cold war. Our enemies are to be found abroad and at home. Let us never forget this: Our unrest is the heart of their success.” Baruch issued in a spirit of a bipolar rivalry that caused every citizen of The United States to feel included to militate for his viewpoints. The 1950s was a time of sheer unease for the communist groups and individuals in the US. Numerous writers were banned from writing and sent to prison, a well-known example of which was communist Hollywood screenwriter, Dalton Trumbo, who resorted to writing his movies under a pseudonym after being blacklisted. So, it seems that the life-long confrontation between Capitalism and Communism was the yardstick of every aspect of life, but what exactly led to such a bloody rivalry and hatred between these superpowers?

To understand this severe rivalry of bipolar ideas, we need to go back to the 16th century, when England and Spain were having a similar battle of ideologies. England regarded itself as the sole representative of Christianity at the time with its protestant views, whereas Spain militated for the same stance with its Catholic system of beliefs. The two countries waged wars from their imperial centres and each of the two brethren believed that victory in this war will determine the destiny of Christianity and monarchy till stars burn out! Similarly, USA championed the capitalist ideology of market mobility of free supply and demand and factors of production owned by individuals. Conversely, The Soviet Union, led by Russia, adopted a capitalist policy of closed markets, wherein factors of production, prices and profits are completely owned and controlled by the government.

In 1917, America entered World War I and Russia went through a huge revolution that ended with forming a soviet state to be the antithesis of Capitalism. After World War II, both America and the Soviet Union were at the peak of power. On the one hand, the US gross domestic production (GDP) multiplied more than seven times and exceed the GDP of Britain by a notable percentage, owing to America’s technological and industrial advancement. Moreover, the US gave free rein to its people to take part in this consumer society, in which people can make their wildest dream come true (The American Dream). On the other hand, the Soviet Union won public trust after Hitler’s defeat since Communists were Hitler’s long-standing political rivals. (People wanted to see Hitler turning in his grave). Although Stalin, the soviet union’s head at Hitler’s time, had entered into a solemn pact with Hitler, after four years of communist-Nazi resistance, people forgot about Stalin’s pact and decided to give Communism a new chance. 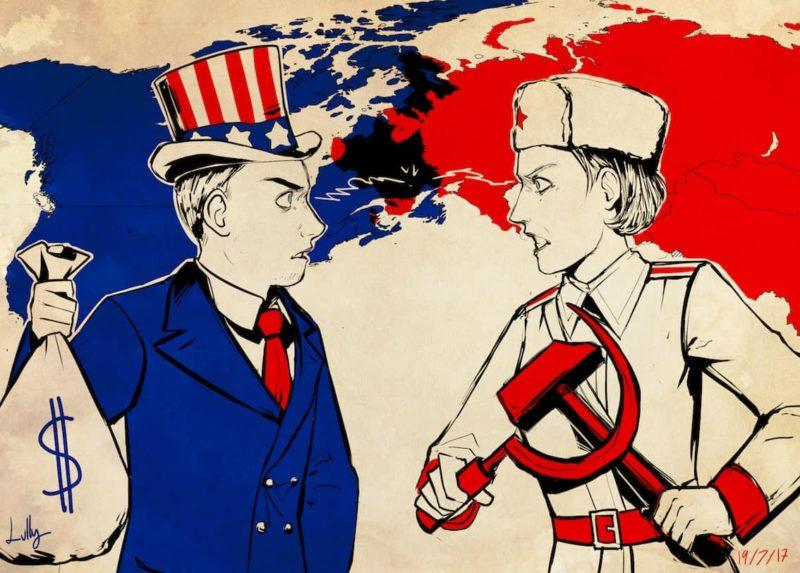 The Soviet Union got considerable support from many European countries: For instance, in Italy and France, people really hated elite polices that were the essence of World War II. Therefore, workers took control of factories and peasants decided to rebel against their landowners because many of such elites were pro-Nazism. Some elite-massacres were even committed by the preliterate, and The Red Army was welcomed in Europe with open arms. However, people no sooner realized that communist fascism was completely identical to Nazist fascism, or even worse; The Red Army committed a plethora of massacres against Christians and non-atheists in Romania, Hungary, and Germany. People were dragged out of churches to prisons and beaten to death. The Capitalist US was also regarded by people as a sadistic power-freak due to the bloody wars it waged against Afganistan and the wide range of nuclear weapons it started to prepare. As a result, people gradually grew tired of the two dominating superpowers, especially after the great toll that World War II had on their lives.

The Establishment of the United Nations was one of the numerous factors that contributed to the end of the war. To accentuate, the UN declaration of human rights was a feat of a lifetime for the United States as it allowed people to retain their respect and confidence in the US as a humanitarian advocate. Hinging on individual freedom and dignity, the declaration was an antithesis to the Soviet Union’s brutality in underground prison cells and utter control of the market. Furthermore, the UN played a major humanitarian role with its missions of rescue and recovery in Europe and Asia since UN representatives travelled the world to provide food, medicines, and life amenities to the needy. Inwardly, the US proceeded with its integral plans for utilizing atomic bombs, producing more than a hundred bombs by 1949. Moreover, the US refused to share nuclear technology as part of its “Peace Campaign”, which indeed drove the Soviet Union up the wall!

The most important milestone that shaped the whole history of The Cold War was the famed Berlin Wall. In 1961, East German construction workers and soldiers began erecting a great wall throughout the city of Berlin and its surroundings. To realise how we got to this point, we have to go back to World War II. America, Britain, and France joined forces with the Soviet Union against Nazi powers. After they defeated Nazi Germany, each of the victorious nations controlled part of the country. So, Germany was divided into two groups, the Federal Republic of Germany in the West and the German Democratic Republic in the East. The East government adopted a communist policy that restricted Western trade and mobility, whereas the west government championed capitalism. While there were free health care and education in the East, the West paraded higher salaries, more consumer goods, and greater personal freedom. By 1961, about 3.5 million people, nearly 20% of the East German population, fled to the west, with more than 130 people killed by soldiers while escaping.

On November 9, 1989, East Germany tried to contain people’s anger by making travel permissions easier to obtain. However, the announcement brought thousands of East Berliners to the border crossing points in the wall, forcing the startled guards to open the gates immediately. Crowds revelled in joy while entering West Berlin and even danced atop the wall. Others began to destroy the wall with whatever tools they could find. Although the border guards initially tried to maintain order, the crowds’ determination was much stronger. Germany was officially united in October 1990, and the Soviet Union fell soon after. One of the most famous graffiti on the wall reads: “Forget not the tyranny of this wall nor the love of freedom that made it fall.”