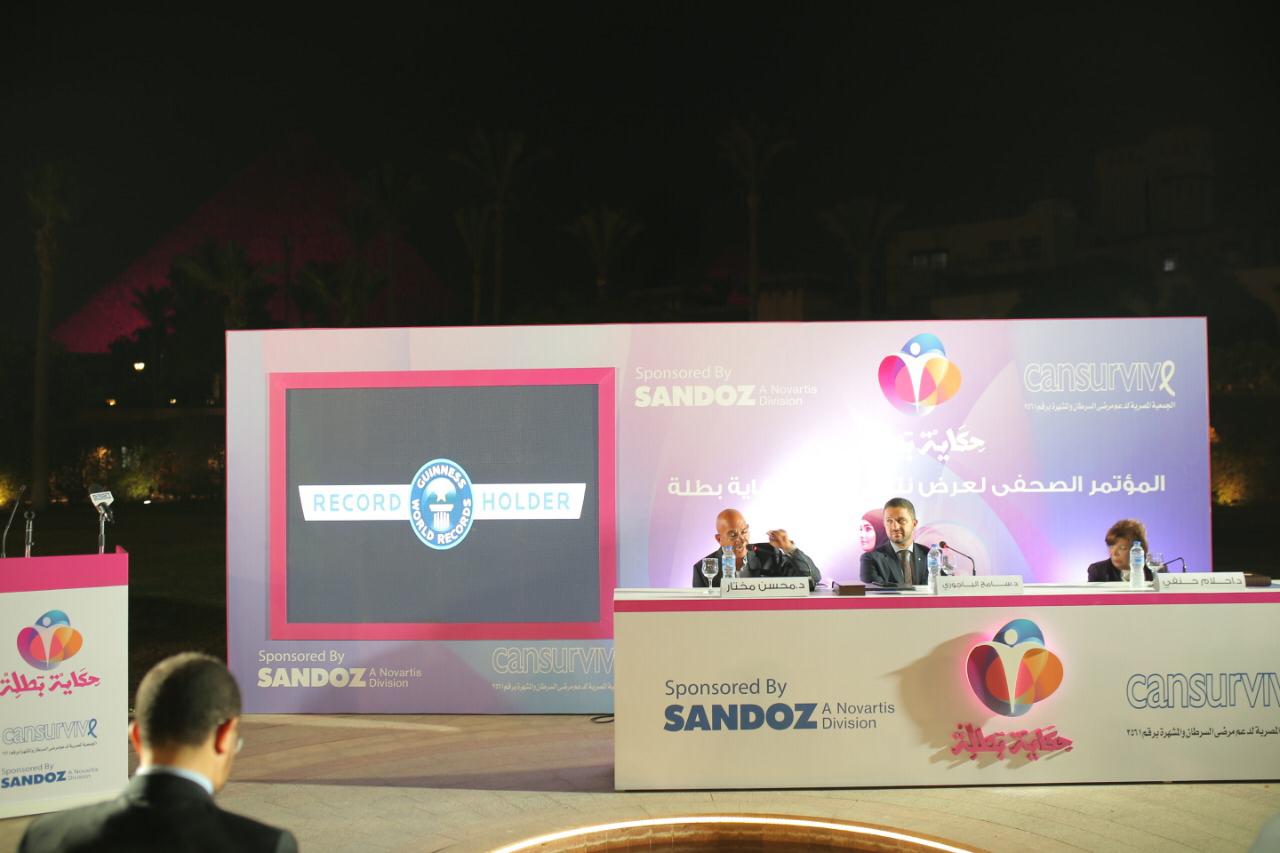 Egyptian Cancer Association For Supporting Cancer Patients, CanSurvive, has celebrated the end of its campaign, “A Heroine’s Story”, which was sponsored by Sandoz Egypt. The campaign aimed at raising  awareness about Breast Cancer and self-examination for early detection of breast cancer. The campaign spanned over throughout the month of October to coincide with the International Breast Cancer Awareness Month, entitled as “Pink October”. The pyramids have been illuminated in pink, highlighting the importance of breast cancer awareness. This comes as a festive celebration of Egypt’s record-breaking, for Egypt has hit the highest number of women who have been taught how to prevent cancer.

Mohsen Mokhtar, president of CanSurvive and professor of oncology at Kasr El Ainy, said that the campaign “A Heroine’s Story” has succeeded, through its various activities, which included outreach units in shopping malls, clubs and universities, in reaching more than 500,000 women and girls to raise awareness of the importance of detection. He added that the campaign also included meetings for breast cancer patients and women who have recovered from breast cancer, to support them and to find an effective way to gather their opinions about their experiences of the disease. What sets this campaign apart from others is that it includes a platform for patients to make their voices heard and a detailed survey to find out what patients’ real needs are and how they can be met in future campaigns.

Dr Mohsen Mokhtar added that the campaign is in line with the objectives of the “100 Million Health” campaign, with the early detection of breast tumours.  It is known that the campaign, launched by the Ministry of Health under the auspices of the Presidency of the Republic, has been an unprecedented success.

Ahlam Hanafy, member of the National Council of Women and rapporteur of the Committee on Health and Population, expressed her joy at launching the campaign “A Heroine’s Story” to raise awareness of the need for self-detection of breast cancer and its impact on women’s health, noting that every day and in every household in Egypt there is a heroine, who is the wife, mother, daughter and sister. The presence of the National Council of Women in the campaign “A Heroine’s Story” is nothing more than a message to every woman and girl in Egypt that she is a true heroine, that she should be proud of herself and that the story of her life in every home is “a heroine’s story”.  All my greetings and thanks to all the women of Egypt.

For his part, Dr. Sameh El-Bagoury, Country Head Egypt and Libya for Sandoz Pharmaceuticals, said: “Sandoz Egypt’s sponsorship of the campaign ‘A Heroine’s Story’, in cooperation with the Egyptian Association for the Support of Cancer Patients, is based on our commitment to provide all possible support and care to those fighting breast cancer, which is the most common type of cancer among women.” Dr Sameh added: “It is not possible to reduce the high number of breast cancer cases without more awareness raising efforts and without raising awareness of the importance of self-examination and early detection, which contribute greatly to increasing cure rates. The risk of the disease is concentrated in the fact that many cases of breast cancer are discovered in late stages. The campaign has achieved its desired goal, as we are proud that the awareness and education message has reached more than half a million women and girls through various means of communication.”

Dr. El- Bagoury said: “We believe in Sandoz Egypt that awareness of this disease cannot be undertaken by a single organisation and that treatment of this disease is possible. The most important step in this direction is to arm ourselves with hope and optimism, and concerted societal efforts to spread awareness and offer therapeutic and psychological support by providing women with new health habits for early detection, and to improve their adaptation and coexistence with the disease.” This is in line with the company’s vision and commitment to the patient, as Sandoz Egypt aims to effectively contribute to ensuring that patients obtain high quality medicines of international standards at reasonable prices for the Egyptian patient at the same time. This is in addition to Sandoz commitment to raise awareness among patients and healthcare providers in the various medical sectors.