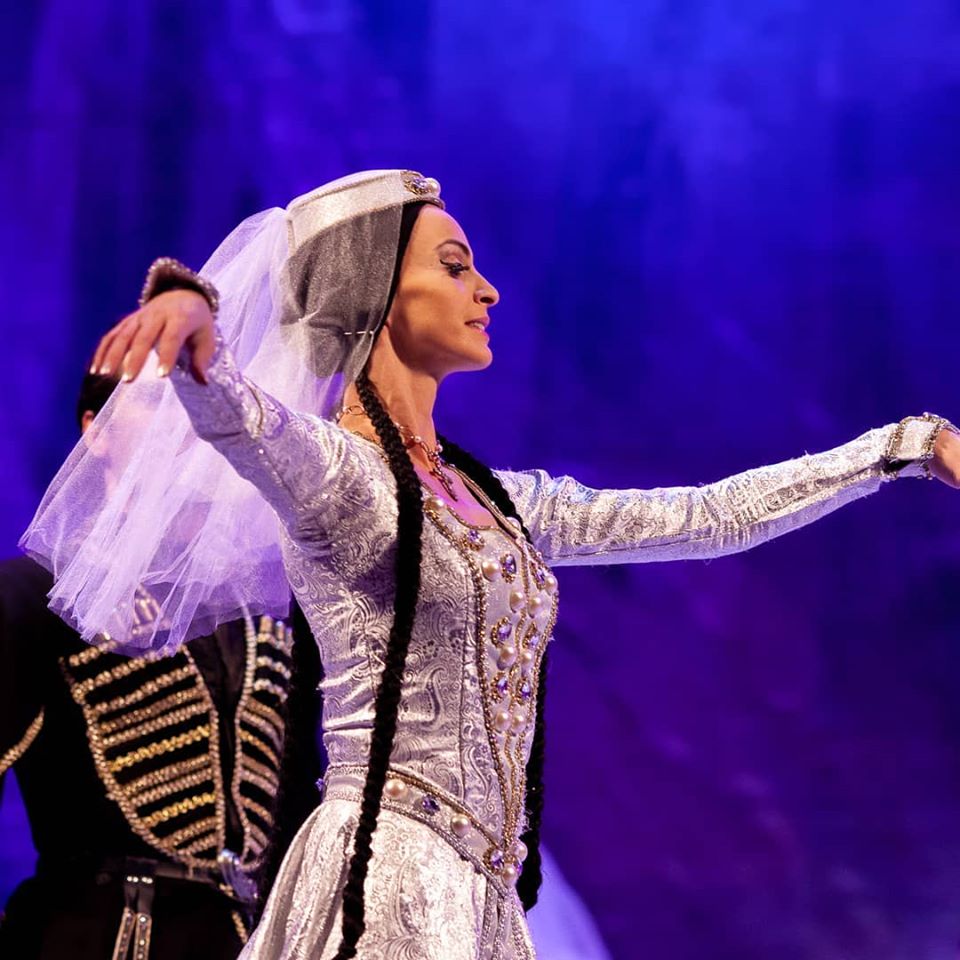 Earlier in the year, the Royal National Ballet of Georgia presented at the Cairo Opera House impressed the public with a spectacular dance show titled Fire of Georgia. Spectators passionately felt time-honored Georgia through the Caucasian rhythms, applying an effective technology, the dancers’ dynamic and sharp movements, their temperamental and photogenic steps, and the colorful costumes used. One of the very interesting details, that made the attendees enjoy with absorbed attention, is using daggers and swords in some dances. The show was divided into two parts: the Georgian Traditional Dances and the Old Tbilisi Bohemia. The first performance included the following dances: Kolkhian Suite, Frescos, Davluri (Nobleman Dance), Khorumi (Warriors Dance), Mountainous Variation, Khevsuruli Variation, & Swordplay. The second one included: Walking on the Old Tbilisi, Vaudeville, Mukhambazi, Jeirani, Kinto, Imeretian Dance, Dance of Trick Riders, City Miniature, Dance by the Spring Water, The Competition, & Final Dance.

The dance depicts the city’s upper class and is performed by multiple couples. It is similar to another performance called Kartuli; however, the former is less sophisticated and the relationship between the male & the female dancers is less formal than the later.

The word means gazelle and it portrays the hunting ritual. It includes classical ballet movements and paints hunting scenes. In this regard, it is worth mentioning Nino Ramishvili (1910-2000) who was known as Jeirani’s best performer. Nino was a ballet dancer, choreographer, and one of the Sukhishvili National Ballet’s founders. She is the most famous Georgian dancer & very renowned figure in her country, enough to naming a street in the capital, Tbilisi, after her. Furthermore, acknowledging the contribution of Sukhishvili and its creators in the cultural heritage of Georgia, sovereign postal stamps were issued in 2001 in the name of her ensemble.

It is one of the most popular Georgian dances and comprises four parts: looking for a suitable campsite, approaching the enemy, the battle, and the victory. Due to the several invasions led against Georgia, Khorumi originated in Adjara, located in the southwestern part of the country. It is said that the reasons behind its creation were to praise major characteristics of the Georgian army in olden times and to remind people that war and peace are two sides of the same coin (in other words, one must be prepared for war to preserve peace). Originally, it was performed by few men, then it progressed to include up to 40 dancers. Doli (a kind of drum) and chiboni (a type of bagpipe) are the Warriors Dance’s main musical instruments. A cloth around the head, another one around the waist, a long sleeve shirt, a trouser, and a pair of long boots are what characterize the dance’s outfit. 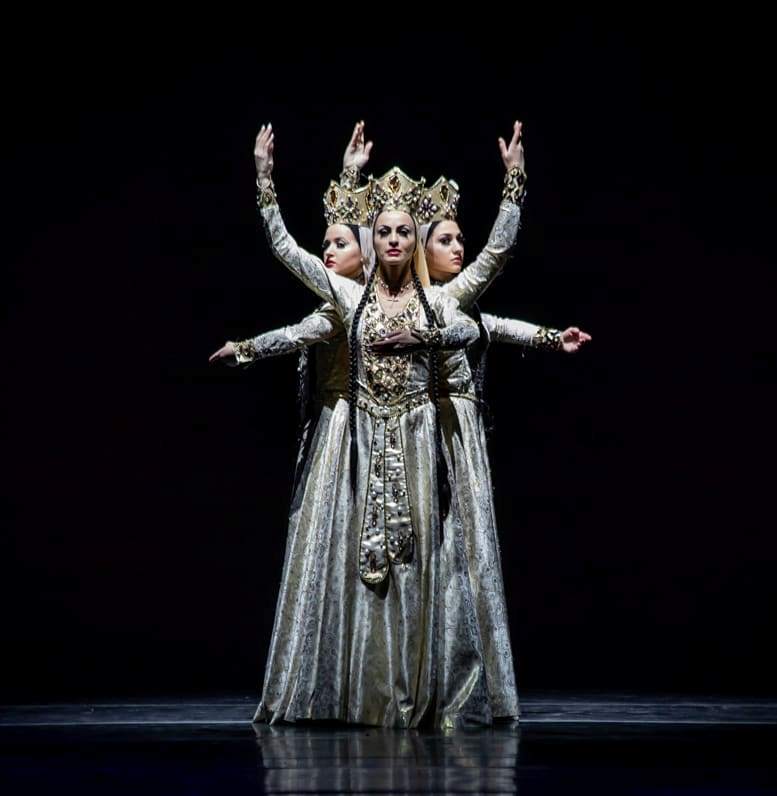 It came from the villages of the Georgian mountains and represents virtues, such as courage, love, and respect for women. It s believed that the dance, performed with swords, originated to catalyze blood feud, a custom that was common in a region called Khevsureti of the community Khevsur. Duels there were meant to resolve major issues. The dance starts with a couple flirting, afterward, when a man shows up seeking the woman, a strong fight begins between the two men and their supporters are involved. The woman tosses her veil to stop the tussle when it reaches its peak; taking into consideration that all disagreements halt when a woman drops her headdress, by tradition.  The fight resumes, the veil is thrown once more (by a woman or more than one), and the finale is left open.

The Royal National Ballet of Georgia

Worth pointing out that the Royal National Ballet of Georgia has been performing on stage for more than 30 years, under the leadership of artistic directors Gela Potskhishvili and Maia Kiknadze. In 80 countries worldwide, more than 40 million persons were captured by the beauty of their tremendous shows.  A fact that makes their performance Fire of Georgia harmonious is that its dances are unified by a common idea and a storyline. 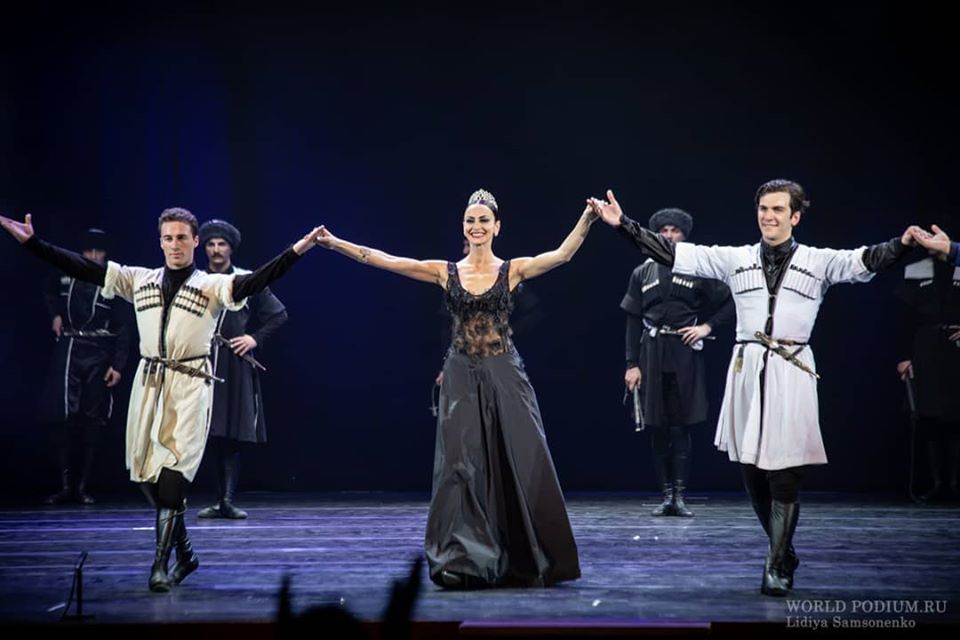