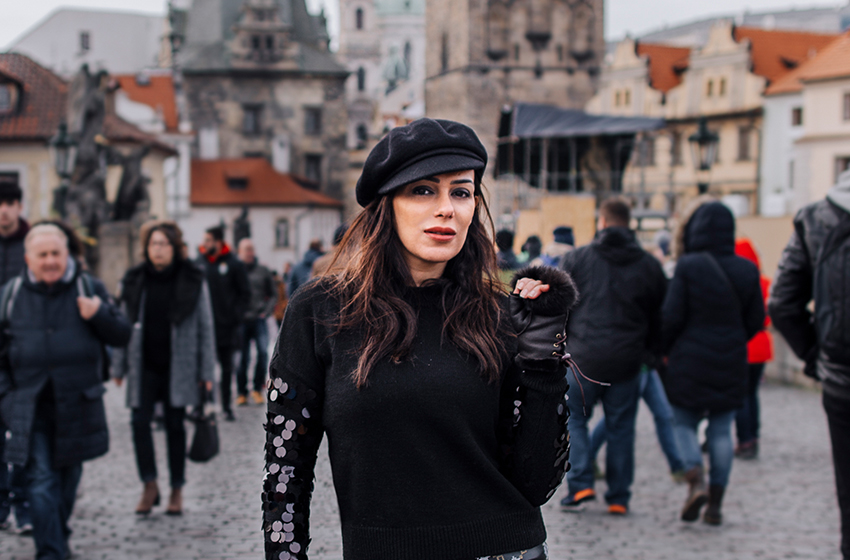 Renowned for cherry-picking eccentric scripts and spontaneously playing impressively complex roles, Injy El Mokkaddem never fails to amaze us with her artistic prowess and refined fashion sense, alongside using her fame in valiantly underscoring controversial topics and social issues of sexual harassment and the like. The sophisticated actress has captured the media’s attention with her impressive performance in ‘Layaly Eugenie’, melted our hearts in ‘La Totfea’ El Shams’, and has left us ravenous for more. The talented star opens up and shares some of her personal feelings and upcoming projects in Ramadan, and afterward.

If I had a good voice, I would have become a singer.

You have 3 upcoming projects ‘Saheb El Makam, ‘Le3bet El Nesyan’, and the movie ‘Bab Ma’azol’. Would you tell our readers about them?

‘Le3bet El Nesyan’ is a series that will participate in Ramadan’s race this year, and I will play the role of a psychiatrist. ‘Saheb El Makkam’ is a movie, and I’m playing the role of a poor woman who tries to survive the deprived life she is living. ‘Bab Ma’azol’ is also a movie in which I play the role of a personal trainer, this role is different and new for me, unlike any other role I played before. As for their releasing dates, they are not determined yet.

You have made huge efforts for your role in ‘Layali Eugenie’, tell us about this amazing role.

I had only one obstacle, I had to learn Italian in order to play that role, so I took intensive courses to learn the language, which was exhausting for me. But once I learned the language, everything afterward was easy, I read my lines, understood the character and its personality and profile, that’s it.

Despite how brief your role in ‘The Sun Will Never Set’, the audience loved it. How does this make you feel?

It makes me feel really proud. This role, in particular, is very special to me. When Tamer Habib offered it to me, I could tell he was embarrassed because of how short it was, but I told him that I love everything he writes and that I was up for it. The director, Mohamed Shaker, and the whole crew were very nice. I loved the idea of the series and I was genuinely excited to be a part of it, especially because my role was one that I never thought I would play. I also wanted to see how the crew of ‘Grand Hotel’ works, and how they managed to achieve such critical acclaim before.  I never expected this great feedback and the awards I received for the role, but it was very fulfilling.

Have you played any roles that resonated with you?

‘Dija’ did on so many levels. We are both ambitious about our careers, while bearing the responsibilities of family and friends. Both of us may seem strong superficially, but on the inside, we are very fragile.

‘Kamla Abo Zekry’ ‘Tamr Mohsen’, and ‘Marwan Hamed’, because they are professional, skilled, and they care for all the details in their works.

Who do you wish you have worked with from the past generations?

Not to take things for granted, and to appreciate all the blessings God granted me.

What motivates and drives you?

How can our community stand up against sexual harassment?

We have already participated in movements like ‘Me Too’, and continue to take part in anything that helps fight harassment. I take this case personally, and I’ve talked about it numerous times on TV. I try as much as possible to raise awareness about it, but it will not see an end until all of us speak out, and stand up against it.

To accept things as they are, and to consider mistakes as lessons to learn from.

What do you think are the key elements for a successful marriage?

None, there are no roles in marriage. However, there are things that are essential within any relationship, like honesty, communication, openness, tolerance, and trust.

What kind of mother you? Too strict or too kind?

I try to be a bit of both. Whenever I’m available, I try to be fun, and make up for all the time I consume working by spending more time with my children.

If you had to choose between a family event and career event, which would you choose?

Family event for sure.

Would you let your kids venture into acting life?

If they are really talented, yes.

In 3 words, describe the formula that allows a working mum to have it all!

A working mother can never have it all, she will just have to juggle between her career and family.

Describe yourself in 3 words?

If you could time travel, when would you go?