Several couples from Walt Disney animated movies marked our childhood and we have been enjoying their adventures. On the occasion of Valentine Day, let’s recall some of Walt Disney’s most touching love stories. 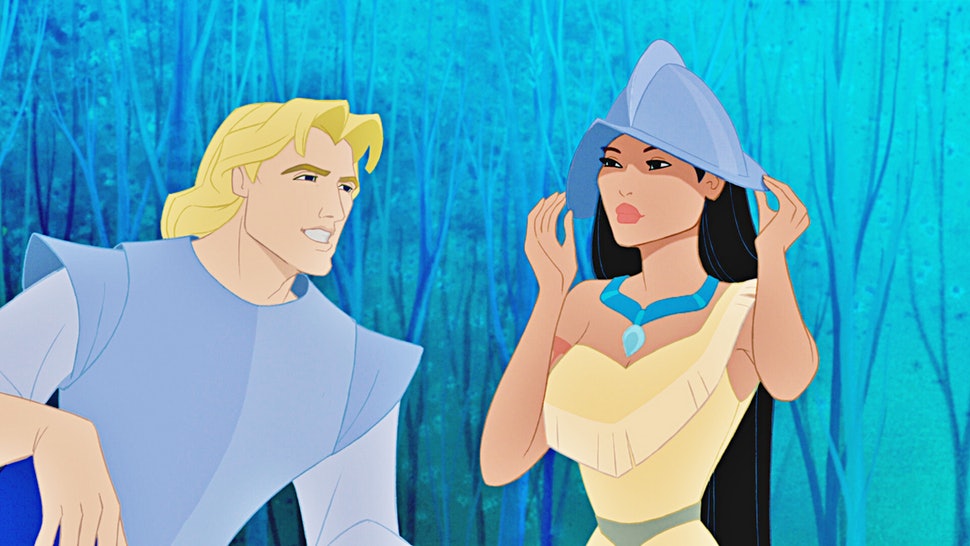 The movie narrates the tale of romance between Native American Pocahontas and Captain John Smith who arrived accompanied by other incomers in the New World to start new lives. Pocahontas’ potent father, the tribal chief Powhatan, refuses their relationship, believing she should marry a native warrior. Meanwhile, Smith’s compatriot John Ratcliffe has a burning desire to steal the Native Americans’ gold. After many intense and unfortunate incidents, Smith has to return to England for treatment. He asks his lover to join him but she chooses to stay with her tribe. So he leaves without her, but her father told him that he is more than welcome to return whenever he wants. The film (part one) ends with the heroine standing on a cliff, watching Smith’s departure. 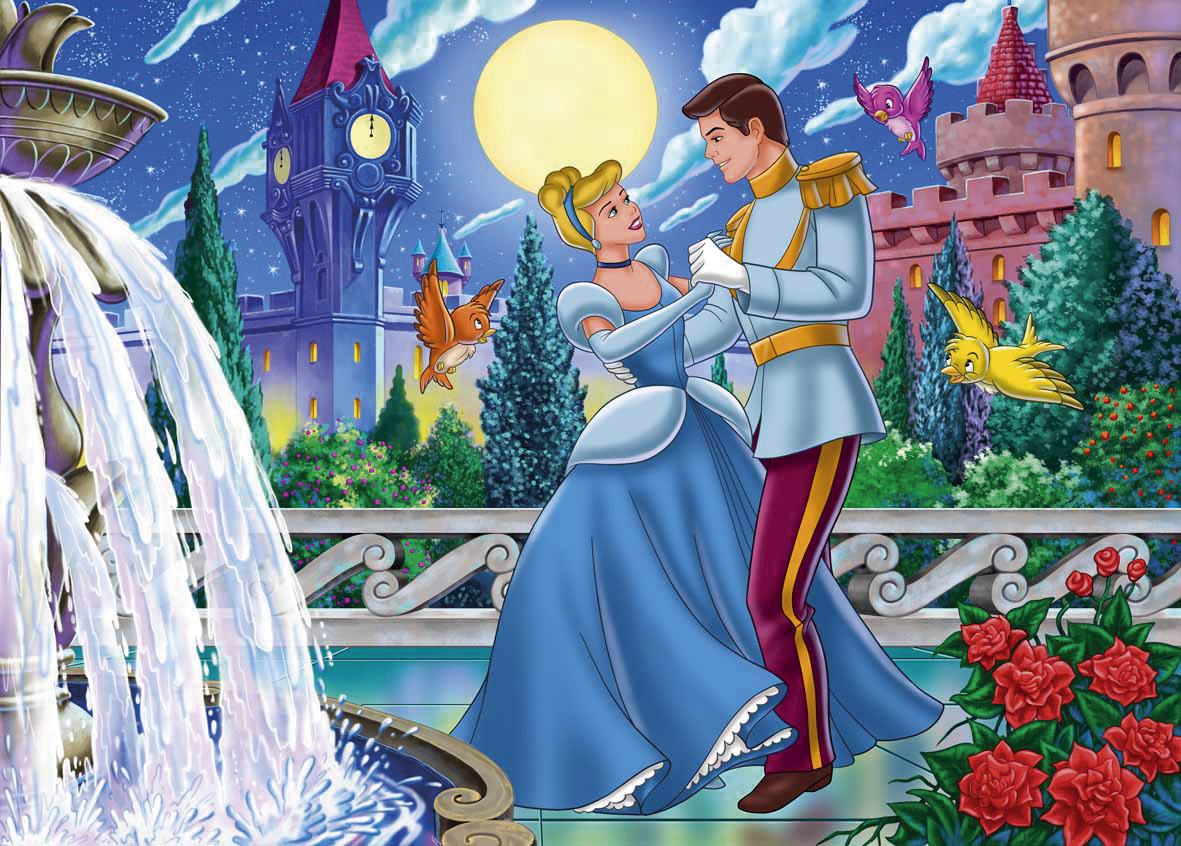 Cinderella’s life turns upside down after her mother dies and her father remarries another woman called Tremaine. The situation turns from bad to worse after her father died, leaving her with her stepmother who has two evil daughters Anastasia and Drizella. The three of them, Tremaine and her daughters, mistreat beautiful and kind-hearted Cinderella who does not have much of chance to attend the King’s royal celebration. However, one day she manages to escape the house to join the prestigious event. Suddenly, at midnight she left the Prince in a hurry, leaving her shoe so it could lead him to her.  After Cinderella tries on the little glass slipper and the Prince recognizes her as the one with whom he has danced at the ball, they get married and live happily ever after.

Everyone gathers to celebrate the birth of Princess Aurora. Everything was perfect until Maleficent curses Aurora, casting a spell on her so that the Princess will die on her 16th birthday before dusk. Mercifully, Merryweather changes the spell and the Princess will instead only fall into a deep sleep. A true love’s kiss is the only way to wake her up. The days come, but Maleficent tries her best to prevent Prince Phillip from rescuing the Aurora. Afterward, Phillip kills Maleficent and wakes Aurora from her sleep. The movie ends with the happy couple dance. 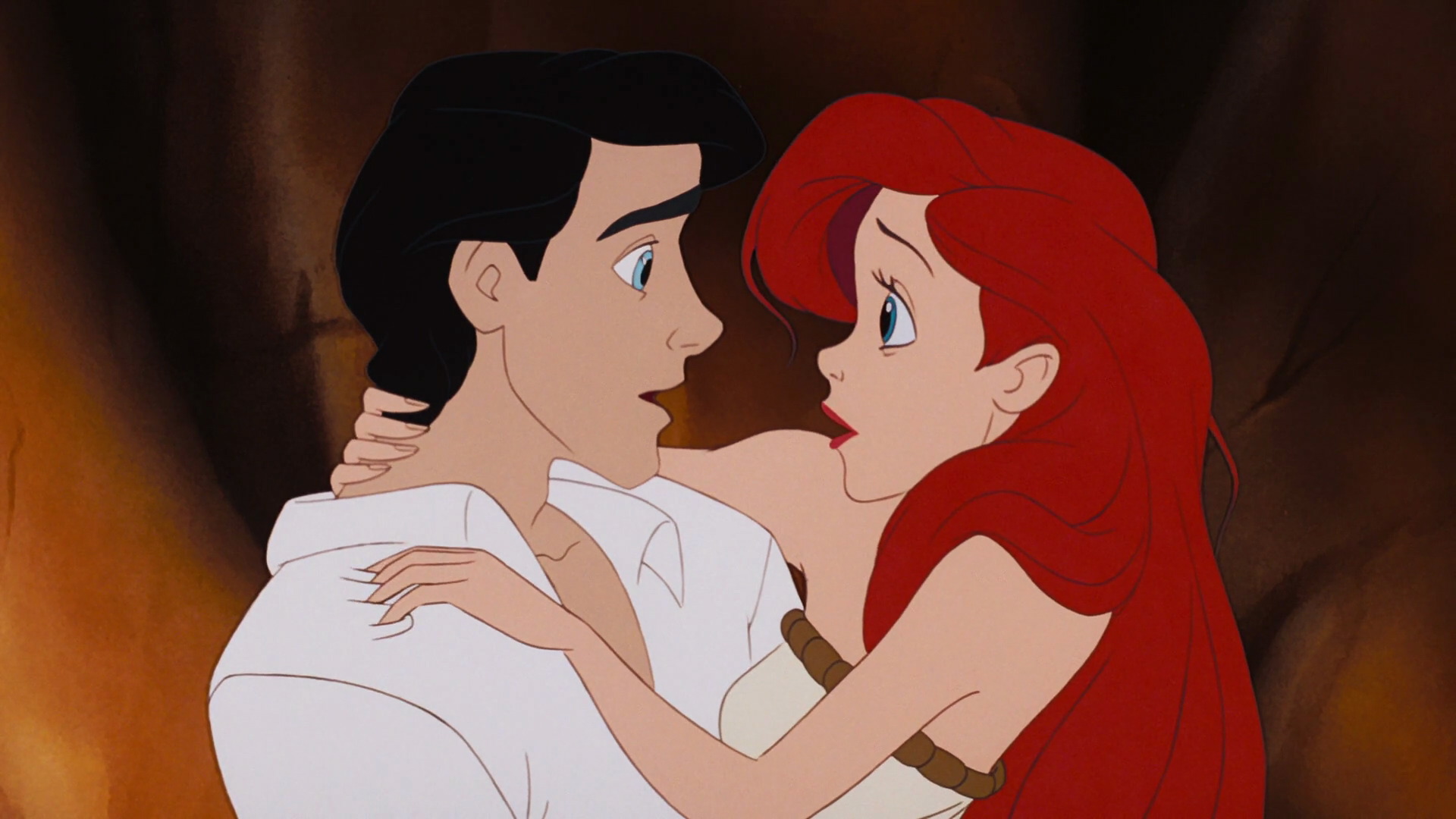 During one of her visits to the surface, prohibited by her father King Triton, Little Mermaid Ariel, who is captivated by life on land, falls in love with Prince Eric (a man). Firm about her decision to be with Eric, Ariel agrees with sea witch Ursula to become a woman for three days, during this period Ariel must receive a true love’s kiss to remain a human forever. On the other side, evil Ursula was planning to use her in order to take over the kingdom. Later, the witch transforms herself to a woman called Vanessa, reveals to the Prince, singing with Ariel’s voice, and casts a magical charm on Eric, making him forget about Little Mermaid. After numerous situations fraught with difficulties, Eric kills Ursula and the King changes permanently Ariel into a human, approving the lovers’ marriage. 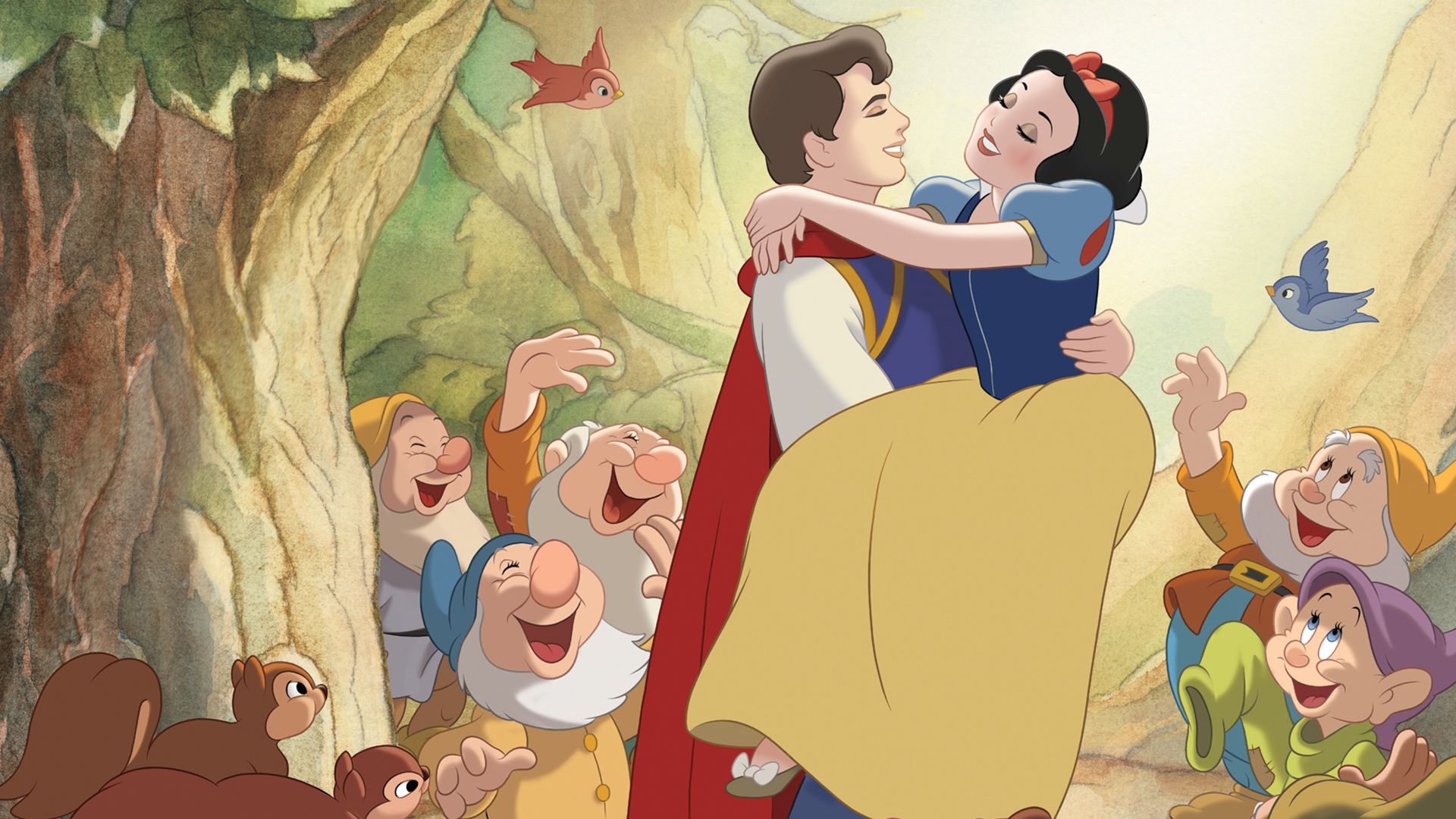 When the Magic Mirror informs the Queen that Snow White is the is the fairest one of all, the former gets insanely jealous so the later has to hide in the forest where she befriends with the seven dwarfs Doc, Sneezy, Grumpy, Happy, Bashful, Sleepy, and Dopey. When the Queen discovers that Snow White is still alive, she creates a poisoned apple that will cause the sleeping death to whom eats it. Only the love’s first kiss is able to break the curse. The Queen tricks Snow White who takes a bite out of the apple. When the dwarfs arrive in their cottage, they find Snow White apparently dead and they put her in a glass coffin. Afterward, the sad Prince visits her coffin and kisses her, an act that brings her to life. He then takes his lover to his castle with the dwarfs and animals celebrating the happy moment. 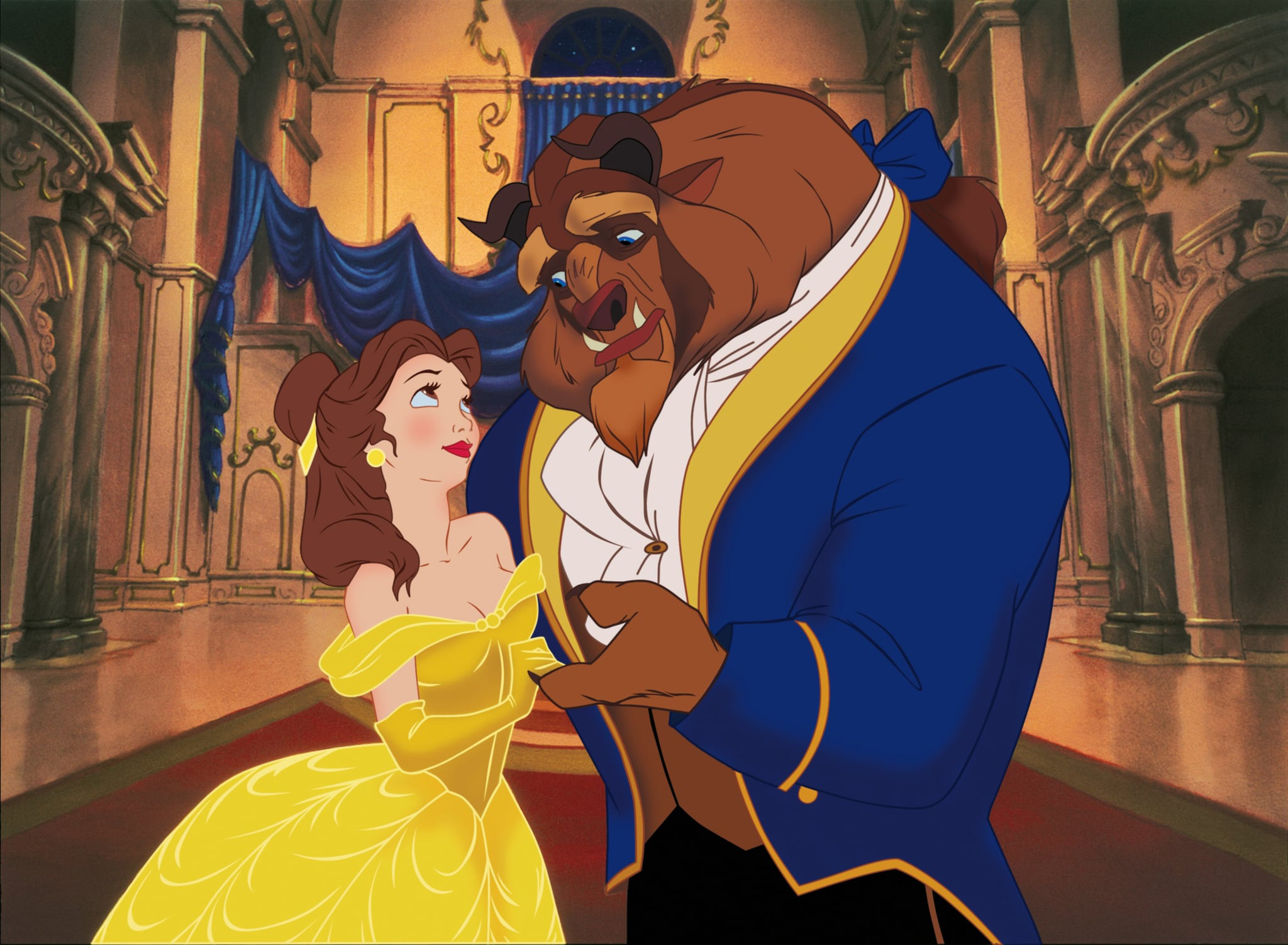 A woman punishes Prince Adam, metamorphosing him into a beast and casting on a rose a spell that would only be broken in case he learns to love and earns the love of another before the last petal falls in during his 21st year. When a girl named Belle (the Beauty) is trapped in the woods by a pack of wolves, the Best saves her but gets injured. Both fall in love after Belle nurses him and she refuses to marry Gaston, a handsome and egoistic hunter who stabs the Prince with a knife. Before the last petal falls, the Beauty confesses her love to the Beast who is dying in her arms. So, the spell in undone, the Prince recovers his human shape, and the couple happily dance.