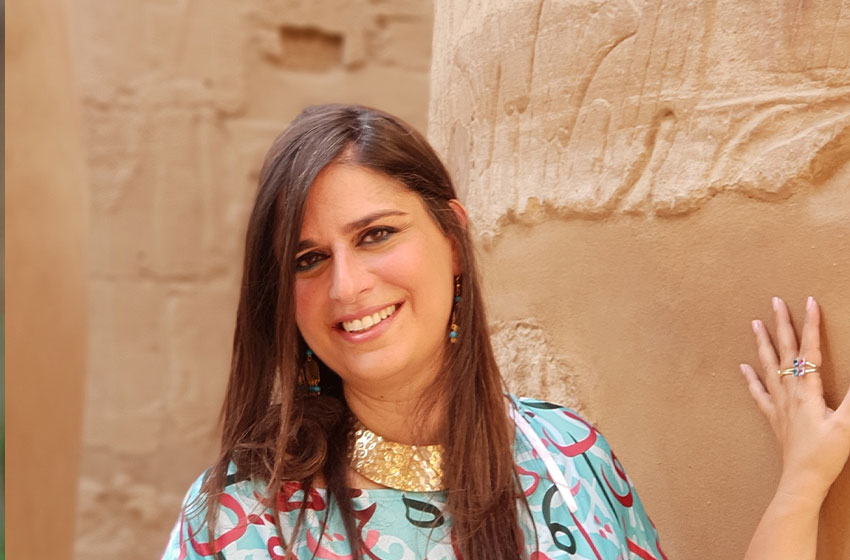 The Voice of Love and Peace

We’ve seen her mimic the sound of a trumpet using nothing but her voice box, and we’ve seen her exceptional Miss Egypt Universe music video ‘Halawa Masreya’ (Egyptian Beauty).  The international songstress, Rula Zaki, continues to impress with her powerful vocals and unconventional talents. The sensational vocalist opens up about her climb to success, how her abilities were first discovered, and her latest releases.

Do you ever sing with your children?

I’m always singing to my children. I sing to them early in the morning to help them cheer up before they head to school, and at bed time when I cuddle with them. I make up funny songs, and I sing special songs that we can perform together. We sang a cover of the song ‘A Million Dreams’ from the film ‘The Greatest Showman.’ It’s now on YouTube. My youngest son, Tameem is eight, and he sings the first part. Then then my older 16-year-old son, Kareem, sings right after him. I join them at the end. It was the movie ‘The Greatest Showman’ that inspired us to sing the song together. We’ve watched it so many times, and we listen to the soundtrack all the time. We also love to sing together in the car. I sometimes get my microphone, connect it to the speakers of the car, and sing karaoke with the kids on the road.

Would you consider yourself international?

I’ve had performances in Greece, Switzerland, Jordan, England and the USA.My songs have an international audience, and have reached many different countries because I sing in 14 languages. Also, our singing voices were featured in a Spanish film, and it was a great honour to be a part of this. The renowned maestro, Francisco Navarro Lara and his son act in this film. He has a world-renowned conducting school with more than 400 students from 40 countries. He has conducted famous opera singers, including Montserrat Caballé, José Carreras, Victoria de los Ángeles, and many others. He contacted me on Facebook after he saw our video on YouTube singing ‘A Million Dreams’ to take permission to use part of the song in his Spanish film. It was a beautiful experience.

Where did you study music?

I got seven scholarships to study music abroad in very reputable universities in the United States, and I ended up studying at Lawrence University in Appleton, Wisconsin. I studied vocal performance and music.

What are some of the awards that you have won?

I’ve received the Arion Music Award, the Grand Prize at the International Song Festival in Cairo many years ago, and I also won the Most Outstanding

Vocalist Award when I was only twelve from Crane Youth Music (CYM) in New York.

Do you do anything alongside singing for a living?

I’m a mother, first of all, and that’s the most amazing full-time job you can have. I also have a part time job as a music teacher. I’ve been teaching for over 16 years. I taught for eight years at the Cairo American College, which was my high school. I’ve also been teaching for more than 8 years at the British International School (BISC) at 6th of October City in Beverly Hills. I am a certified Early Childhood Music Specialist, and a licensed Kindermusik educator. I love teaching from ages four to seven, it’s my specialty because all kids at this age love music. Music is a fun way to teach kids plenty, and it’s very rewarding. I get lots of hugs, smiles and “I love you, miss Rula” [laughs].

Where is your favourite place to travel?

Well, my husband and I love to go to Thailand with my kids. We love Thai food, it’s our favourite. We also love the foot massages there, they’re very cheap and they’re so good. The beaches, the nature and the animals there are just outstanding. We like to do outdoor activities with our kids there, and Thailand is full of that. We love spending nights on farms as well, and we’ve spent many nights on farms in the States near New York, and in Switzerland. I feel it’s much better than going to Disneyland or something. We get to do activities outdoors, we collect eggs from chickens, we go feed the animals and milk the cows… They also offer a meal out of the produce of the farm. We go collect cherries from the trees, we take walks, and go ride horses and donkeys. It’s a healthy kind of lifestyle away from electronics that I love for my kids.

What do you like to do when you’re not working?

Well, I’m singing most of the time, unless I’m sick or my voice is tired. I love to play with my boys and my husband, they’re my treasure. I also love to prank call my friends. I have a YouTube channel called ‘Rulafone,’ where you can hear me doing pranks in English and Arabic. I change my voice into a balady Egyptian woman, or mimic any other accent of a different nationality when I call a friend. But my pranks are not harmful or rude, and all my friends even ask me to post the prank on their Facebook wall after. It’s never in bad taste. At the end of the call, I just tell them it’s actually me and we start laughing together.

What or who inspires you?

My mother is the one who realised that I have a talent for singing when I was nine years old. She was the one who signed me up for voice lessons with Dr. Raouf Zidan and the late Mr. Larry Catlin. They said my voice sounded like a 20 year old’s when I was only nine. It was all thanks to my parents who supported and encouraged me that I got where I am now. They allowed me to go to the States alone as an Egyptian girl to study music, where my passion was. It’s all because of my mum that I’m now doing what I love. I have the best parents ever, they’re my biggest fans and they’re the best role models.

Out of all your performances, what is your favourite venue?

They’re all different. Singing for a wedding, for a crowd, or for festivals like Korba and Maadi street festivals are all different experiences. Festivals have thousands of people from different backgrounds, and they have this very unique energy. Singing for small private events and weddings where I can interact with the audience, go down and talk to them, and let them sing and dance with me also gives me a very special energy. Other than that, I love singing in opera houses with a live orchestra. It’s an amazing experience, namely because of all the beautiful sounding string instruments in the background. I’m lucky that my voice is versatile. It allows me to sing in different styles. I can also sing in 14 languages. I’m very lucky and blessed that I can reach and please audiences ranging from children and young adults, to older crowds.

What is your latest release?

It’s ‘Halawa Masreya’ (Egyptian beauty). It was a song for the Miss Egypt Universe pageant. The music video was beautifully shot in Luxor and Aswan with Egyptian beauty queens. I was lucky that they took part in the video and shot this in these amazing places in Egypt. It’s like the new ‘Helwa Ya Balady’ song.

There are never really typical days. But a lot of the time, I wake up early to get my kids ready for school before I go teach music to the little ones at the BISC. I usually finish around midday, then I have the time to go to the studio and record a song. I come back before my kids arrive and help them with their homework. Then I get to spend time with them, and maybe sing at an event during nighttime.

I have a children’s album that is finished, and waiting to be released. It teaches manners, stuff like not littering, standing in a line, saying please and thank you to everyone. Just manners and respect, which I think have been lost these days. We need to reteach them to our kids, and to the adults as well sometimes [laughs]. I have songs in the album that teach the alphabet, numbers; and in other songs I sing about respect and manners. There’s also one where we play simple percussion instruments using household items. It’s edutaining – it educates and entertains at the same time.

What do you like to do at your performances to surprise your audience?

I love to do the trumpet with my lips. It’s when I mimic the sound of the trumpet with just my mouth and vocals. People usually don’t believe it! I just stop the music, and I go down the stage before I start playing the trumpet with my vocals and lips, with no music in the background other than my own. People are usually shocked and impressed, and I love it every time. Other than singing in 14 languages, I’m known as the Human Trumpet. I’m also known as the Voice of Love and Peace because I like to sing for peace, national unity, and acceptance of all beliefs. I sing lots of songs for Egypt and for children. I love to use my voice to spread peace and hope.