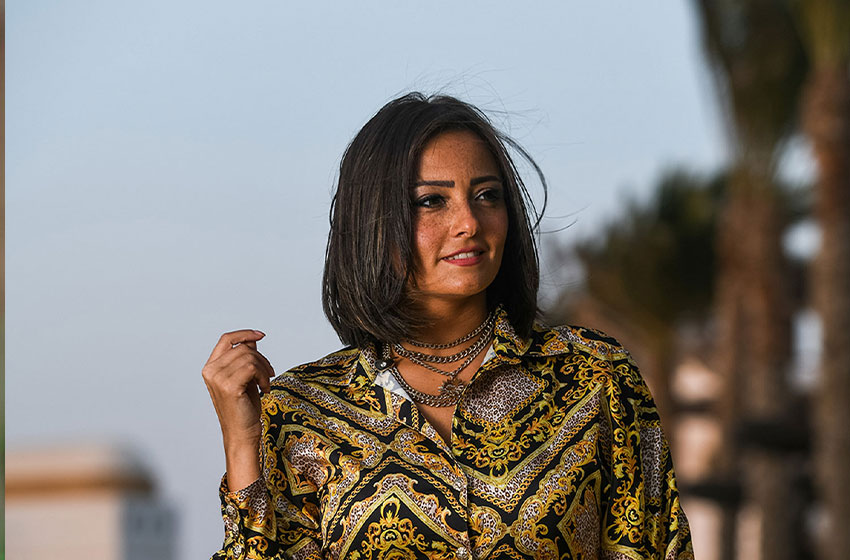 We have seen her on the big screen starring award-winning films, not least of which is the Mohamed Diab masterpiece 678,  and Ramy Emam’s TV series Awalem Khafeya (Hidden Worlds) with Adel Imam. But other than her notable roles in cinema and television, Bushra is a co-founder and COO of the glamorous El Gouna Film Festival (GFF), which was attended by international stars this year, namely Owen Wilson, Patrick Dempsey, Clive Owen and Sylvester Stallone. Bushra talks to us about the success of the festival, and tells us who inspires and empowers her.

You’re COO and co-founder of GFF. Walk us through how the idea of the festival was born, and how you played part in it.

GFF has been a long life dream of mine, as well as of my fellow co-founders and the Sawiris family. It has been an idea lingering around the minds of a lot of film makers, I am sure. But with Amr Mansi, myself and Kamal Zadeh, we managed to bring it to life through hard work and proper delegation of authority. Each one of us excels in a certain aspect. And none of this could have been possible without the support of Naguib and Samih Sawiris, and Intishal El Tamimi. This question always brings to my mind the famous quote, “Ideas are yesterday, execution is today and excellence will see you into tomorrow.”

How do you evaluate this year’s edition vis-à-vis last year’s?

There’s crystal clear improvement. It is fair to mention that it was difficult to surpass last year’s performance. Our starting edition was so great, I think we have raised the bar for ourselves way too high.

Are you able to enjoy the festival when you’re on the red carpet, or are you too busy keeping an eye out?

Of course I am, and yes I always keep an eye out. Attention to detail is one of my advantages and downfalls. I like perfection to detail.

So far, what are you most proud of achieving with this festival?

I must say that I am extremely proud of our initiative in involving some of the finest young Egyptians to help organise the festival. The devotion, dedication and excellence these young women and men have shown is impeccable and second to none. It is fair to say that the masterclasses and discussion panels held during the GFF have been extremely educational. Festivals are not just about red carpets, pictures and fancy dresses. They’re about learning from each other and passing the knowledge forward. We witnessed this year discussions about humanitarian topics, taboo subjects and industry techniques.

When will we see you on the big screen next?

Very soon. I am working on a couple of what I can only call major milestones in my career. I am also in the middle of reading some very interesting scripts.

What’s your golden rule to success?

Will you name three people that inspire you?

I’m actually sitting in a room plastered in posters of many people who have inspired me, among whom is Youssef Chahine. He is the reason why I fell in love with cinema. As for music, someone who inspired me as a kid was Julie Andrews in Sound of Music and Mary Poppins. But that’s just on top of my head, it’s so hard to limit the list. My mum and dad have also been a great inspiration to me.

What are three things you absolutely cannot tolerate?

Intolerance, injustice and lack of integrity.

What are three things you cannot live without?

My mother, my children and my career.

What is your stance on women empowerment in Egypt?

It’s in every molecule and every atom of my body, and I’ll continue to support it until the day I die. I support each and every Egyptian woman fighting for her rights, and I will always be backing her up.

Do you think you have been lucky in finding people who empower you?

I was very lucky to come from a family that supports women. My mother is a Development Consultant specialised in gender issues, and my father fights for the less fortunate, including women, children and the poor. So yes, I believe I was very lucky to have a family like mine to push me to become the woman I am today.

‘Cinema for Humanity’ is your slogan. What is the festival achieving in this area?

‘Cinema for Humanity’ is our theme. It’s not just a slogan, we try to implement it and prove it by inviting films that support humanity. We try and become as humane as we can be. We also discuss humanitarian issues in the panels and masterclasses and the workshops that are hosted in the CineGouna platform, so I believe that it’s a passion; it’s a real belief. It’s not just a slogan or a theme.

I listen to criticism. I respect people’s different opinions and different points of view as long as it’s polite, as long as it’s been delivered in a decent and civilised way. Otherwise, I just turn my ears off.

What are three things you’re proud of?

My country, the film festival and my path.

What do you think is your biggest achievement?

What do you aspire to achieve next?

Make this festival grow in the right path and see my children grow in the correct path also. I would love to see my country develop in every aspect, economically, politically – everything.

What is your worst nightmare?

Negative people. People who are filled with hatred rather than peace, love and positivity.

Have you thought about founding a music festival?

That is certainly something we have to seriously consider, especially after the Minister of Culture has asked for that on the opening night. I believe that Eng. Samih Sawiris is going to take this request seriously. And obviously if someone is going to be working on it, it’s going to be Amr Mansi and I.

A message to all dreamers out there…

There might be someone out there with the exact same dream as yours. The only difference between you and them is the action that will chase your dream and bring it to reality. Nothing is impossible.