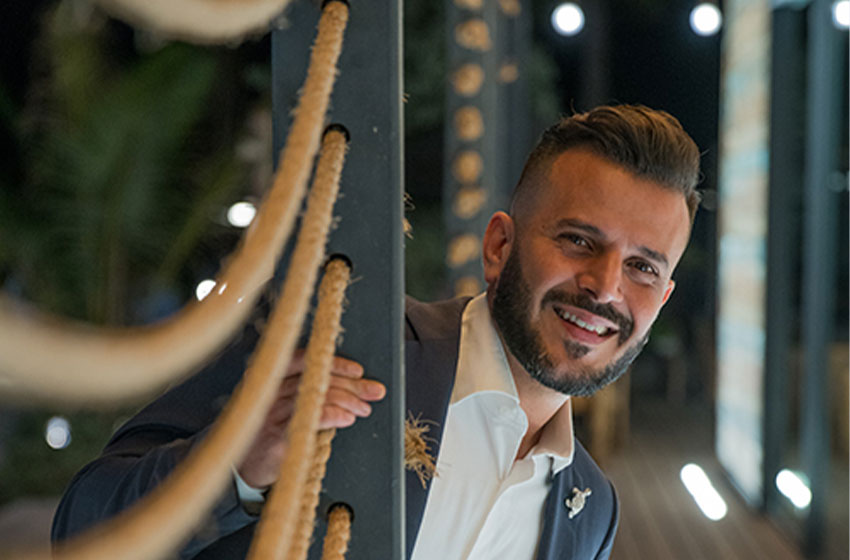 Whether you’re looking for viral writings, spontaneous TV hosting, or successful productions – Suby Otry is your man! His countless interviews with the biggest names in the Arab world have made him one of the most radiant names in the media industry. Otry has never failed to keep us updated on the juiciest gossip and entertainment news through the show ‘Trending.’ The talented host walks us from the moment it all began, to his future plans of starting his own show.

What sparked your interest in the media?

Ever since I was little, I always had an interest in anything related to art, television, music and acting. I even participated in activities like school broadcasting when I was younger. Every day before the salute of the flag, I used to host the school’s broadcast program; I included competitions, Q&A, and songs in a 15-minute period. Since then, I started becoming more interested in the field, and I had my family’s support. I participated in theatre during school, where I had the chance to star in many plays and took up a lot of amazing roles. It’s a passion that just kept growing all the way through college. I studied business, which was not at all related to what I wanted to do in the future. However, during that time, I worked in journalism and I used to cover a lot of events for a local magazine we had in Syria. So all of this passion wasn’t born yesterday, it has existed for as long as I can remember, and as days went by, it kept growing within me until it became my major. I studied Mass Communication and Digital Production to become a good producer, and then I got the opportunity to host several programs. The programs varied, but they were all somehow related to celebrities and celebrity news.

You regularly meet many inspirational stars. How has this helped enrich your career?

This has helped my career a lot because the popularity of the celebrity is what initially attracts viewers. They watch to see the celebrity you’re hosting, so it’s a vital reason for the audience to recognise me and love what I do. Throughout my life, I’ve met a lot of stars, including big names in the industry, some of whom have passed away like Saeed Saleh for example. This helped me build my career. It’s an experience that taught me a lot because each one of those stars has their own understanding of fame; some don’t even care for it and only focus on the fact that they do what they love; some don’t like talking to the media, and prefer to just sing and act; others prefer to be close to the audience. I have met different personas and I made very good friendships that continue to last until today.

In your opinion, what makes ‘Trending’ stand out?

It is a very light program, not because I think it doesn’t tackle important issues, but because of its spontaneity. It depends more on dialogue and the studio – even the way the interviews are conducted in the program are very spontaneous, and in different locations. It’s not your traditional way of interrogating someone. We have fun activities with stars and it is throughout these activities that I ask them the kind of questions people have in mind. In a way, the show completes stories that people have already seen, discussed and analysed; they ask a lot of questions, so someone has to deliver these inquiries to celebrities. ‘Trending’ updates the audience on trends, why they’re trending and the pros and cons regarding them. The program managed in less than two months to prove its position in the Arab world as a means through which people can exchange news. It makes me happy to know people feel close to the show, and can interact with it.

‘Trending’ currently features the latest and hottest news in the entertainment industry. Is there anything you’d like to add to the show?

The next season of ‘Trending’ is going to have new categories that people care about more these days. We plan to become more innovative, and create trends that celebrities will want to follow. We’ll also perhaps follow up with fresh faces to help them create their image. There are several ideas that are in discussion; but we have to wait until the second season for them to become more negotiable.

You’re a writer, TV presenter and producer. Which of those would you say you enjoy doing the most?

I think that the three fields are not that different. Each of those is fulfilling in its own way. I like writing something that’s already going on in the minds of the audience, and shaping imagination into stories that people can identify with; it’s a great way to touch those who have had the same experience. When it comes to production, I find it a very pleasing process to create and compose a story that will be aired on television, but it’s not easy to do and requires professionalism and lots of research. You have to be certain that you’re delivering the right information, and you need to be 100% accurate about everything related to the demographic you’re targeting as well. As for TV presenting, it’s people who decide whether they like you or not, and I believe the audience enjoys seeing me on the screen. I like presenting what I produce because it enables me to deliver the exact idea I had in mind precisely the way I want it to be received. It’s much better than someone producing and another presenting because the delivery of what’s written might not meet the expected standards or results. When you prepare and present, it becomes truer.

Does such a career ever get too stressful?

To be honest, it’s one of the most draining jobs! Before meeting the celebrity, you have a lot of preparation to do, and there’s so much to ask while bearing in mind you have to pose these questions in a way that wouldn’t be insensitive to the interviewee. During the interview, you have to be very cautious about your performance, your appearance, and the way you talk; while being conscious of needed boundaries between you and the celebrity. Even if you want to ask fun kinds of questions, it still has to be well-delivered, and this is yet another kind of pressure. While editing the script, you have to be very cautious of how you communicate what is said without cutting off essential parts that may alter the delivered message. Lastly, when it is aired on television, you worry about two things: one, how will the audience take it? Will it appeal to them? Did it cover all their questions? Two, you worry that the celebrity might not have enjoyed the interview, so you remain nervous until you know both the audience and the interviewee liked it, and that’s your cue to whether or not your mission was accomplished. This job is so stressful, but for me, it’s a fun kind of stress. Even if there’s pressure, it’s pleasing to see a good outcome from all the pain.

What kind of challenges do you commonly face in your career?

Lots! When you go behind the scenes of a film or a series, you mainly concentrate on lead actors because the audience loves them; but at the same time, you have another mission of spotlighting the producer and the director – the ones who actually create the work. So sometimes, I have too much material to which I’m required to equally distribute my attention. Sometimes, some producers, directors or actors get upset that they were too small a part of the interview, but because I have a time limit, I want them to understand that I can’t include every single word they have said, even though I try my best to do so. Other times, celebrities refuse to talk about certain issues that are the current talk of the town. I somehow have the ability to compel them answer all my questions smoothly, and not in sneaky ways that would bother them; I believe it’s a gift from God. But I respect boundaries… if it’s something they insist they’re not comfortable with, I avoid bringing it up. It’s more of a collaboration, rather than a pushy, nosey process. With experience, and the more you speak to those stars, the more you begin to have a background about their preferences. I can only name a few celebrities that I have interviewed only once. For example, I have interviewed Nancy Ajram over 20 times; Najwa Karam over 25 times over the years. So you get to know their nature, and how you should approach them with the tough questions. A general approach is with a smile, or in a fun manner, and that usually gets them to answer.

Any celebrity that hasn’t yet been featured on ‘Trending’ that you’d love to meet?

‘Trending’ hasn’t been around for a long, so of course a lot of celebrities haven’t been featured yet. Personally, I have most probably interviewed 90 percent of Arab stars. There are three icons I haven’t interviewed yet and would love to: Julia Boutros, Fayrouz and Amr Diab. These three I’m very hopeful to have a long interview with one day!

For those who wish to follow in your footsteps, what qualities does an ideal TV host need to have?

I think that the first step is to have the talent and believe in it. Having the talent is not something that is self-determined, it’s for the audience to decide. The audience has a different perspective, so being told you’re talented has to come from them. A lot of people believe they have the potential to be good TV hosts, while they are much more talented in other fields which they would be better off exploring. You should not aim for fame because it’s not as positive as people see it. Fame could become harmful, as some may become notorious rather than popular. For someone to succeed, they have to be very well-experienced. I urge you to read a lot, explore different media schools, and sift out what suits you. Some may love sports as a hobby, but that doesn’t automatically make them capable of presenting sports-related material. You have to find something that touches you, and then educate yourself very well about it; as well as familiarise yourself with the experiences of others. Generally, you should stay away from selfishness and jealousy if you want to make it anywhere.  Always look forward and focus on bettering on yourself. Don’t concern yourself with what anyone else is doing because to each their own style. You’re not like anyone, and no one is like you.

Supposedly what’s next is my very own program, which could be a collaboration with someone. I have lots of ideas. I’m thinking of starting small on YouTube and on social media; as in this era, people prefer the easy way to receive the message. There are several projects I have in mind, and I haven’t yet decided on any. They are still ideas, but when the start to actualise them, I will update you!

-The last thing you googled…

-Your most used emoji…