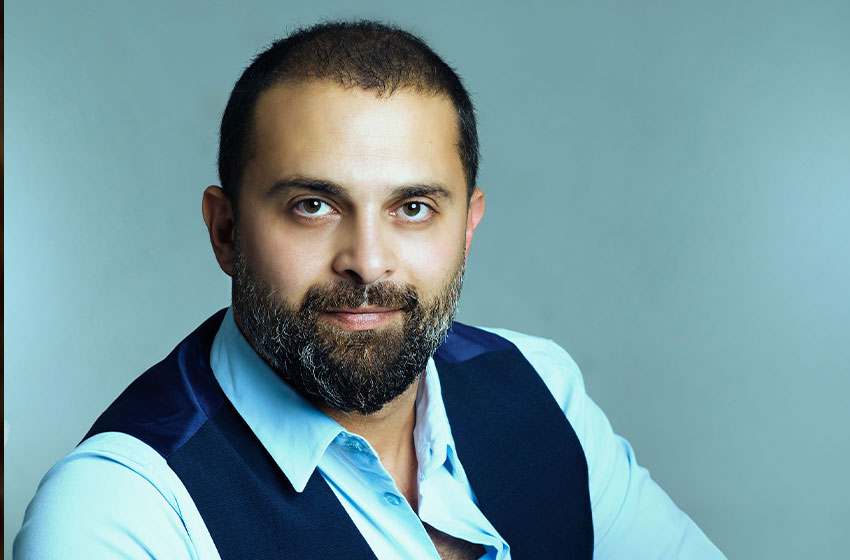 Ever since the acclaimed film production company, ‘The Producers’, was launched, mainstream taste of the Egyptian audience in television and cinema has been incontestably refined, where their demands have surpassed an affinity for mere entertainment to include thought-provoking content and top-notch direction. Hani Osama, who has co-founded the company with Hadi El Bagoury, has since raised the bar sky-high with his eccentric films and TV series on some of the most controversial social taboos. Some of his masterpieces include ‘Lamoakhza’ (Excuse My French) and ‘Sheikh Jackson’. The pioneering filmmaker talks to (in)sight’s Rania Badr about his journey in the industry so far, and some of his future projects.

You’re now inarguably a filmmaking icon in the Middle East. How did it all begin?

TV commercials have always fascinated me as a kid, and that has driven me to direct a few advertisements when I was still in school. Eventually, I felt more drawn to the happenings behind the camera. I realised how it was a much more crucial step to the outcome, so that’s when I decided to shift to production. I began producing commercials before I graduated from university, got acquainted with directors like Hadi El Bagoury and worked with him for a while before founding our production company ‘The Producers’, which has been around for 18 years.

The focus of ‘The Producers’ at the start was also TV commercials, correct?

Yeah, we started producing commercials and music videos, which we still continue to make, but it was around eight years ago when we decided to expand. Our first deviation from this was ‘Ard Khas’ (Private Screening). It was Hadi’s idea, and I think it was unconventional to the public to shoot a series using cinematic techniques. We had been making commercials for years now, so quality is always a result we don’t actively work on it comes naturally at this point. We thought, “why not produce a drama with the same quality?” And this marks the start of our journey.

And that’s when ‘Wahed Sahih’ (A Whole One) and ‘Excuse My French’ followed?

Hadi was the one who directed ‘A Whole One’. ‘Excuse My French’ was our first project together in cinema with the producer, Mohamed Hefzy. We then produced the TV series ‘Zarf Eswed’ (The Black Envelope).

Not many in your shoes produce both films and TV series. What’s the difference between the two?

You’re right, it’s unusual, especially because we also produce TV commercials. I’d say what’s common between the two processes is how much attention we pay to quality, whether it’s a short project, like a film, or a longer one, like a series. In technical terms, the disparity is huge, but this is what they both have in common.

Do you have a preference for either?

When a project is more compact, that gives you the chance to perfect the most intricate details, and that’s what makes films my passion. Then again, some projects can only be rendered into TV series like ‘Sabea Gar’ (The Seventh Neighbour) and ‘Ana Shahira’ (I am Shahira), and this also includes our upcoming projects, which will comprise multiple seasons. Yet, I’d say cinema is my number one passion.

The eccentricity of ‘The Seventh Neighbour’ must have been a risky adventure. What drew you to this project?

The subject it held was what intrigued me the most. ‘The Seventh Neighbour’ was not just an intangible concept; Heba Yousry, Ayten Amin and Nadine Khan had already screen-written some of the episodes. Sure, you can vaguely talk about the story of the protagonists that takes place in an apartment building, and it sounds interesting on the surface, but when you read the script meticulously, you’ll either be more intrigued or decide that it’s not your cup of tea. The details Heba employed in her writing, and in the dialogues, were extremely tempting to me. The nature of the series compels you to go beyond commercial boundaries, and yet, the core subject caters to mainstream audience. So I realised I can create a commercial project without the mainstream elements that an audience might expect. Personally, I love to venture when I sense a certain project has potential, and I’m thankful that it worked out in my favour.

The series introduced new faces to the industry. Was that part of the plan?

The three directors saw that the nature of the film did not necessarily urge you to hire certain actors, and yet, we still casted stars, but we also introduced fresh faces. I love working with stars, and ‘Hepta’ along with ‘Sheikh Jackson’ would bear witness for that, but I also have a penchant for diversifying the cast when I have the chance, to make that sort of balance between stars and new faces.

Was the critical acclaim ‘The Seventh Neighbour’ received expected?

I knew it would succeed, but not like this. Sometimes you only produce a film because it matches your interests and you don’t expect it to be a box-office hit, but drama is almost always produced for business purposes, so I wouldn’t have worked on it had I suspected it would be unsuccessful.

What’s next for the series?

Season two will be aired this month and the third will be aired around October or November, and we will do our best to always air two seasons per year of ‘The Seventh Neighbour’ at these timings.

‘The Producers’ have pioneered the idea that TV series can be aired off-season, and not just in Ramadan. What encouraged this idea?

I had worked on multiple series in Ramadan including ‘the Black Envelope’ and ‘Le’bet Iblees’ (The Devil’s Game), but there was always the risk of having your series overlooked among so many others. I believe ‘The Black Envelope’ deserved more credit than it received. It makes no sense to be absent from the screen for eleven months of the year, when you have the chance to air your work at a time when it can be appreciated. When I started making 60-episode TV series, I decided to air my work off-season, and I knew that others would follow, they were just waiting for someone to give the first cue. ‘Al Tofan’ (The Flood), which was also a great success, had aired alongside ‘The Seveth Neighbour’, and I think this emphasised the importance of screening TV series off-season.

Do you believe that the format or nature of some series are only suitable for Ramadan?

It’s plausible. The subject of the series can impel you to reconsider when you decide to air it, and this also goes with films. Some movies have a winter air to them, which cannot be screened in the summer. Similarly, some flicks are only suitable with Eid. The idea of genres befitting a particular season is not foreign in the industry, but then the problem of not having any season in Egypt besides that of Ramadan arises. When great works become available all-year-round, that’s when we can begin considering this idea thoroughly.

Recently a statement has been issued by Egyptian TV networks to reduce their budget during Ramadan. How does this affect you?

It’s a great step that had to be taken, although I don’t believe it suffices. It’s not just prices that play into this, but also quality. Parallel to this, we must continue introducing new faces to the industry, not just actors, but the whole crew team, décor experts..etc. This will automatically help you create works at a lower cost, rather than be stuck with big names that become an obstacle when you want to produce something on a budget.

Do you think the rising of salary scales in the industry is logical or problematic?

It’s definitely problematic. Drama production has always been the medium through which stars are made. The next step for them is cinema. But if you hire a celebrity, who demands millions, and assign them a single role in a series, you’re practically deteriorating the natural cycle of drama production for everyone else. It’s okay for movie stars to participate in TV series, but they must also abide by the rules of the industry, not bring their own rules to it.

Being one of the most controversial and successful movies last year, are you satisfied with the outcome of ‘Sheikh Jackson’?

The film is over three years old, and this ranges from the moment Amr Salama told Mohamed Hefzy and I about the idea. We were so excited and started working on it, but had a production break for a while and resumed a year later. So when it was finally screened, it was like a long and arduous birth of a project we’ve been working on for so long. The international feedback we received was totally unexpected but well-appreciated. Getting nominated for an Oscar really raised the bar for my expectations as well. Sure, eventually it wasn’t short-listed as we had expected, but still the buzz it created on an international level was fulfilling. It’s a film I really enjoyed making.

How did you take the wide criticism of the film, namely when it was accused of blasphemy?

Personally, I welcome all kinds of criticism, and it is never met with a biased attitude on my part. Differing opinions still have a point of view that I respect. But when it comes accusations of blasphemy… none of us had this intention, and the film does not depict religion in a disrespectful way. I don’t even consider this criticism, I see it as an attempt to fish for people’s attention, so I shrug it off.

What can you unleash to us about your next anticipated project ‘Ragol Al-mostaheel’ (The Man of the Impossilbe)?

Ahmed Mourad has begun screenwriting, and as soon as Marwan Hamed is done with ‘Torab Al Mas’ (Diamond Dust), we’ll be set. We have a plan to start doing preparations in March, so we can begin shooting by the end of the year. The initial plan is to have it screened in the summer of 2019.

Anything you can tell us about the cast of the film?

We cannot decide before we have the script ready. Even the elements of production and pre-production including the location of the set will all be based on the script, so nothing is final until then.

Would you introduce new faces in ‘The Man of the Impossible’?

Potentially. We have high expectations for the film, so I believe hiring fresh faces would be a great addition.

‘The Producers’ has been around for 18 years. What has this journey been like so far?

It feels much shorter. There have been ups and down. I still have ideas I have yet to crystallize regarding content. I’m also looking forward to the shift in the television industry from traditional drama to modern series that will be available on digital platforms like Netflix and the like, and this will surely affect genres and their consumption. I’m already working on two projects, one is a novel by Mohamed Sadek – the writer of ‘Hepta’- who is working on the script of his book ‘Anta’ (You) himself. The other project will be directed by Ahmed Khaled and written by Mahmoud Desouky. I’m very excited to see the outcomes of these projects when they air, but I’m not rushing them until everything on paper is final.