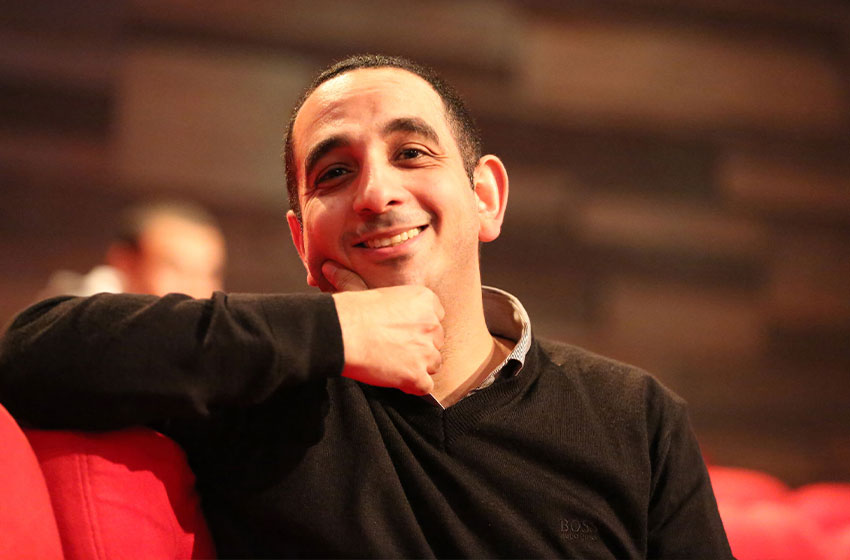 The Maestro Behind The Scenes

Driven by inextinguishable passion and a strive for perfection, Tarek El Ganainy has been leading the television production industry long enough to make it thrive. ‘Saturday Night Live Bil-Arabi’ has especially been garnering attention in the MENA region, excellently bringing home SNL’s widely known humour with the dash of Arab-ised comedy we all know and love. Alongside flawless production, El Ganainy has also recently proved his exquisite skill further after organising the outstanding opening and closing ceremonies of El Gouna Film Festival that have surpassed everyone’s expectations. El Ganainy shares with (in)sight’s Rania Badr some of his personal thoughts, and discloses some details on his next anticipated project ‘Abu Omar Al Masry.’

Everyone’s talking about the significant improvement the third season of ‘SNL Bil-Arabi’ has seen. How did you make this progress possible?

The show is progressively maturing as we learn from the mistakes we’ve made in the previous seasons. Personally speaking, season two is my least favourite so far because there were some guests who did not really suit the air of the show and because we may have put more pressure on the writers, since we had some tight deadlines. And this is part of why season three was by far the best; we finally did what we wanted to do. I believe season four is even better. We added more songs,  and had new crewmembers and guests like Amr Wahba, who hosted the news update in season three, is now one of the main cast in season four and has been a brilliant addition ever since.

How do you operate the process of producing such a huge show?

We usually have a board meeting  based on which we make a list of 30 names or so of potential hosts and guests. This list usually has several stars of the same category. The second step is a selection process of handpicking one celebrity of each genre, since we try as much as possible to offer diversity. So if there’s a Lebanese singer category, we pick one. In the action star category, we pick two, and so on. Ahmed Elsaka for instance is hosting episode 50; a number which is in and of itself a milestone. He has made four visits to the office, each no less than three hours. That’s on top of recording a song in the studio, and working on the digital sketch –so you’re talking about 50 hours of constant work on stunts, choreography and what have you. This is why we make sure we handpick actors who can commit to this, it’s not just a one-on-one interview we get done in a day’s work. From the very beginning, we have made sure to challenge ourselves by working with serious actors like Hend Sabry and Mona Zaki on sketches that turn out to be unexpectedly hilarious, as well as those who surprise people with their humour like Haifa Wehbe.

Does the over-censorship of some of the show’s jokes ever become problematic to you?

We do try to censor ourselves first. Yet the problem is that the universal rule of comedy is for it to be based on politics, religion, or sex, all of which we do our best to avoid. There were more sexual jokes at the beginning, but we have cut down on those and replaced them with social humour –we’ve run out of sex jokes anyway! [Laughs] Another problem is that the show is very expensive to produce, so it has to be broadcasted on multiple networks; which drives you to meet the challenge of making evergreen jokes that could still make people laugh six or seven months later.

How does the process of producing a foreign format, differ from producing other shows?

Financially speaking, the show requires a weekly makeover of the set and a constant change of cast, which is extremely expensive. But the real challenge of format when it comes to ‘SNL Bil-Arabi’

is this constant shift in screen-writing from a genre to another. When we went to New York, this was my main focus. I wanted to learn how to fluctuate between genres week in, week out. What also makes the difference is size of the show, since it determines the amount of changes you’re forced to go back and forth with. I shot the 30 episodes of the  ‘El-Sha’a’ (The Apartment) in just 12 days because we had one set. On the other hand, ‘El-Tagroba’ (The Experience) was shot in eight months, since we had to relocate a lot, etc.

The Egyptian TV networks have issued a statement to reduce their budget during Ramadan. How does this affect you since you have a series next Ramadan?

It may seem wrong, but if you look ahead, it’s the right decision. Since channels are now suffering financially, it’s a much better option than airing a series and failing to pay the cheques they signed. If you want continuity, this decision is a must. The second decision that, in my opinion, should follow is an official increase in the price of the airing minute on TV. Phone networks have to follow the rules of the Telecommunications Regulatory Authority (TRA), so not one network can just decide to reduce their tariffs to lure in customers, and the television industry lacks such a regulatory system in Egypt when we need one to avoid these ridiculous leaps in prices that are all borne on the shoulders of network channels. This decision is needed to help channels cut their losses and sustain the industry, but we must also find a way to compel everyone to stick to it. If one person deviates, the whole balance will be thrown off.

What if a producer sells his series to a foreign network? Couldn’t that prevent the series form being broadcasted on our channels?

No, a foreign channel would never be able to claim the rights of a series and prevent it from being aired on Egyptian channels because they would never be able to afford doing that. And in the event they could, they wouldn’t bother simply because ten years back, Egyptian products may have been of great importance to the Gulf, but have become less so after the flouring of Turkish and Syrian television, so the competition is off the table to begin with.

What do you expect next Ramadan’s television scene to be like? We heard there are 26 shows lined-up so far.

Eight years ago, they were 72! This Ramadan I think the line-up will round up to around 22 shows. Every year, the number goes down, but the quality goes up. I used to produce three TV series during Ramadan, but for the past three years, I’ve been working on a single show for each Ramadan season, which I think is a better strategy. We try to branch outside of the Ramadan season though. For instance, we made second and third season of ‘Hekayat Banat’ (Girls’ Stories) and ‘Elbyout Asrar’ (Secrets of Homes) last year and never televised them during Ramadan. The coming year, we’re planning on doing the same with the production of the Arab version of ‘Suits’ and most probably season four and five of ‘Girls’ Stories’.

Would you venture to do that with a big budget project like ‘Abu Omar Al Masry’?

No, because the price of the airing minute outside Ramadan is not profitable enough. A series like ‘Secrets of Homes’ was aired with 23 sponsors, yet today’s low cost of the airing minute of commercials for this kind of show would never garner enough profit even with that many sponsors. This is the kind of regulation I was talking about before; prices should see an increase depending on both the channel and the content itself. For instance, if client X wants to take 5% market shares in Ramadan, that gives the client a budget of 500 commercials, which no one even watches because it bores the audience! With the same share, if the client is offered just 50 advertisements, they’d still be on board, and this strategy is far more effective in marketing terms because people will actually have the patience to sit and watch them.

How did you come up with the idea of ‘Abu Omar Al Masry’?

Mariam Naoom and I have always wanted to work together. She approached me with her idea to turn ‘Abu Omar El Masry’ and ‘The Murder of Fakhr Al Din’; into a TV series; I read the novels immediately called Ezzedine Choukri to obtain the rights of both novels. Two years earlier, I was supposed to make an adaptation of his novel ‘Bab El Khroog’ (The Exit Door), but it’s a narration of fictional political events that had oddly taken place after publication; shooting it now would just be a mere political documentation.

Why did you choose Ahmed Ezz as the leading actor?

When you read  a novel or a story you start imaging certain faces as the characters by default, and I couldn’t think of anyone but Ahmed Ezz to play Fakhr Al Din.We also have the director,  Ahmed Khaled Moussa on board, who’s a great commercial director, and with Mariam being a brilliant artistic writer, they make a super unique team.

You participated in El Gouna Film Festival. Tell us about your experience there.

Our role was to handle the opening and closing ceremonies, but it’s important for people to differentiate between these ceremonies and the actual festival; some people think those ceremonies constitute the whole event because that’s what they see on TV, but this is clearly untrue and discredits the amazing work Naguib Sawiris and Amr Mansi have done throughout the event. We were worried at first because it’s nothing like we’ve ever done before, but we liked to take on the challenge. In cooperation with the talented team of the broadcasting TV channel, we managed to organise ceremonies that proved successful.

Do you think El Gouna Film Festival’s success was a motive for Cairo International Film Festival to keep close standards?

Yes, of course. I think that one of the best things that happened to Cairo International Film Festival is El Gouna Film Festival. Since GFF has set a high standard and CIFF decided to follow in its footsteps and up its game, so you have to give credit to both!

Have you considered being more involved in cinema to raise the bar like you did for TV series?

I have co-produced many films like ‘Samir we Shahir we Bahir’, ‘Banat El A’am’ (The Cousins), ‘Al-alamy’ (The International), etc… but I was never the one responsible for the execution. However, this step is becoming more challenging with time because I’ve already produced 15 successful TV series like ‘Ayza Atgawez’ (I Want To Get Married), (Girls’ Stories), ‘Neran Sadeeka’ (Friendly Fires), ‘El-A’hd’ (The Testament) , etc…  and I’d prefer to fulfil the same standards when it comes to movies.

How do you evaluate your journey so far?

I didn’t inherit this job, I’m passionate about it, which is why I’m always looking for new challenges. I always seek what would distinguish me and highlight my capacities. That is what I will continue doing. I also hope I get to produce something abroad, and I already have something in mind.