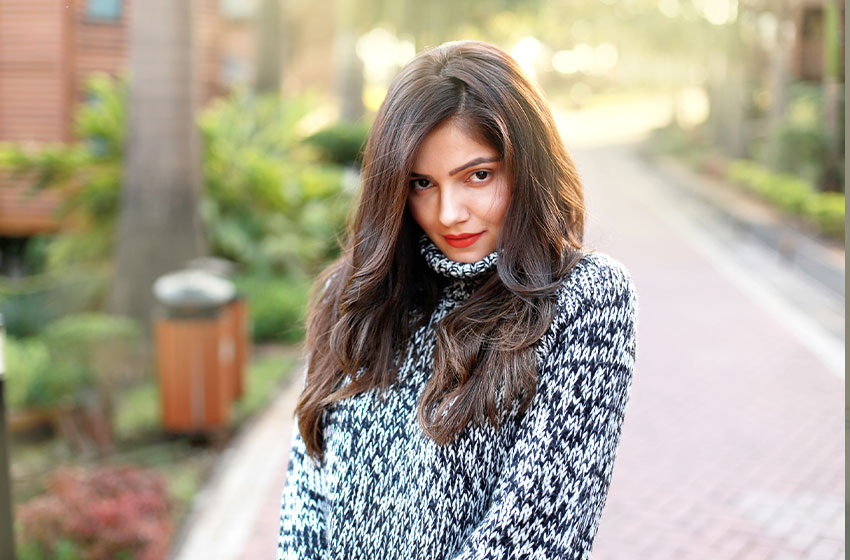 There’s nothing quite like indulging in another culture’s cinematic masterpieces, and when it comes to the Indian screen, Rubina Dilaik makes the top of the list of our favourite Indian actresses. Her soap opera performances especially never fail to make our hearts skip a beat. We got the chance to speak to the ‘Shakti’ star, and she’s told us her story as an actress and where she draws her inspiration from.

First of all, I want to begin by letting my Arab fans know that I am extremely grateful that my show and my character as Soumya are loved all across the globe, with the Arab fan base being amongst the strongest pillars supporting my TV series.

I like to think of myself as an ardent performer . My roles, my shows and my work have been my biggest joy. With full attention and purest of intentions, I strive to breathe life into the characters I play. In my free time, I love to dance, sing, read and pamper myself. I make an effort to spread happiness to people around me and invest in relationships. Like any other girl I dream, and I work towards achieving said dreams.

What was your first role?

I started my career nine years ago through a very popular show called ‘Chotti Bahu’ that aired on Zee TV. I was the protagonist, Radhika, and the show depicted her devotion to a very mischievous and playful mythological character, Lord Krishna. I am very grateful that my first project was such a big hit worldwide, even though I was a new face to the industry. ‘Chotti Bahu’ was one of the first Indian shows to come back with a second season, with the same lead actors, solely due to audience demand. That very fact gave me immense confidence, and there was no looking back. The loyalty of my fans that I have seen and experienced since I began my journey continues to motivate me. It is my greatest asset, my reward and my earning.

My first source of inspiration has been my mother. My family, my work, my crew and colleagues for the past nine years have also inspired me. My friends who shower me with love inspire me. My fans have also been such a great inspiration and have shown me the true meaning of chosen family. When I travel, I am galvanised by the stories I hear and the people I meet. My boyfriend, Abhinav Shukla, inspires me by the way he lives life so simply and respects nature and every living being. I am so grateful that the universe has given me situations and people around me that continuously inspire me.

How do you feel about being widely known in the Arab world?

It certainly feels wonderful that I have a fan base in the Arab world. Despite the language barrier and cultural differences, people send love in the purest form.

Do you remember the first message that you’ve received from an Arab fan?

Yes, I very well remember! It was on my Instagram and it was in Arabic, so I did not understand the words, but it had so many emojis, kisses and smiley faces, so I’m assuming that it was a heartfelt one. As I said earlier, language does not matter because it is the love that transcends the barriers, and I definitely “felt” the message that the fan wanted to convey.

Did you fear the reaction of the Indian society towards your role as a transgender?

Yes, I was initially very apprehensive and I had my own fears. Soumya, a transgender with a dream, is unusual to the Indian society and very challenging. Many of my contemporaries turned this role down, but I decided to take it against all the odds. Initially, the future of the show and the survival of my character was very bleak because we were taking a huge risk, and the risk was that the show would not survive longer than a few months in the event the audience rejected the concept. I must say the channel and the makers of this show took a big risk, which proves that only when you take such a risk in life do you have the energy and enthusiasm to pursue it.

What preparations did you have to make when you got your role as Soumya ?

I am not a method actress, so not much. I am an actress who completely believes in action and reaction, so I always resort to spontaneity.

What would you say distinguishes Vivian as a co-star and as an individual?

Vivian is a superb co-actor. He gives you the time and space to perform, and is very receptive at the same time. When input is given to him, he meticulously applies it and it makes working together a breeze; particularly when we’re working on a scene between Soumya and Harman.

Does Soumya resemble Rubina in any way?

No, but you could say they are two sides of one coin, since I live the character 12 hours a day! I’d say they are inseparable even though they are completely different.

Do you think you will be confined to romance for long?

I don’t think I will ever be confined to any particular type of character or genre. I have done characters like Radhika, an orphan with an unwavering faith in Lord Krishna. I did the character of Smiley in Sony TV’s ‘Saas Bina Sasural”, who was a bubbly, chirpy and cheerful punjabi girl. Then I played Sita in ‘Devon ke Dev Mahadev’, an epic character of a warrior princess. I also did the character of Divya Malhotra in Zee TV’s ‘Punar Vivaah’, where I was an actor who played Radhika in ‘Choti Bahu’; I was portraying an actor’s life on screen, which was a different experience for me. Now I’m starring as Soumya, who is a transgender fighting for her identity in society. So as you can see, I have been blessed with a variety of roles and every role has a distinctive flavour to it.

Would you consider yourself an adventurer?

Until I met my boyfriend Abhinav, I was not an adventurous soul. Since he has come into my life, he has brought a lot of adventure to it. I owe my free spirit, my spontaneity and my enthusiasm completely to him.

How do you handle the demands of fame?

I believe that when you become famous or become a public figure, lot of responsibilities rest on your shoulders. But through many encounters and through gradual progression, I have realized that once you have your priorities sorted out, everything else falls into place. Polishing my skill, working on my talent, being honest and true to my work as well as being ethical and professional are my priorities. I don’t try to seek instant gratification; instead, I try to improve myself. Once I understood this, the demanding nature of fame did not bother me. The only thing that used to pester me was that people try to judge you and put you down by making remarks about your personal life, which we all have a right to keep private, but I have learnt to shake it off.

Do you follow any certain beauty routine or diet?

I follow a simple mantra – eat the right kind of food at the right time and do a variety of work outs. I do yoga, stretching, calisthenics and strength training.

What other path would you have taken, if not acting?

I would probably be a public speaker, but my friends often tell me I would have been a professor because they think I am way too disciplined! That said, I think I am doing exactly what I was meant to do. No matter what I do for a living, I think one thing I’m sure about is having globe-trotting as my hobby or a second profession.

Do you plan to visit the Middle East?

Like I said, I aspire to be a globe-trotter, and visiting Arab countries is on my bucket list! Soon, I shall travel to your part of the world and experience the sights, culture and food, and connect with the locals.

A word for your Egyptian fans..

A very big thank you to my Egyptian and Arab audience! Your love and support means so much to me. I hope through this interview, I have been able to convey my enormous love and respect to all of you.