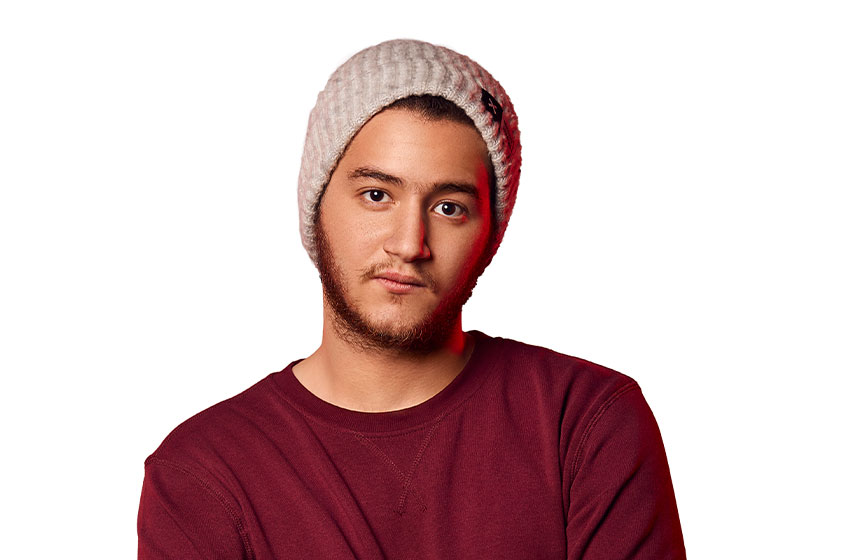 When we were first introduced to Ahmed Malek’s talents in cinema, it was in small roles in the film “Mafish Faeida” (There Is No Hope), and TV series “Ahlamna El Helwa” (Our Sweet Dreams), which were his steps to sky rocket to full celebrity status after his groundbreaking roles in “Al Gama’a” (The Brotherhood) as Hassan El Banna, and more recently as Mans in “Eshtebak” (Clash). We got the opportunity to talk to the promising young actor about his career and keys to success. Check out our interview with the rising star, Ahmed Malek!

What are the pros and cons of reaching stardom at a very young age?

You don’t enjoy the little things that everyone enjoys; you become more self-aware. You also do something different than what most people do –those are the cons. Generally, I just went for it despite all the cons and this has affected me a lot. As for the pros, you just gain opportunities that you wouldn’t normally gain.

Do you enjoy your celebrity status?

I don’t measure myself as a celebrity. I’m trying to measure myself through the craft that I do as an artist.I also still have a lot of roles to portray, as I’m just starting out my artistic career.

If not an actor, what would you have been?

I think I have always wanted to be an actor. I don’t really see myself doing anything else.

I’m always open to any criticism directed at me, as I believe that it’s natural for an actor to be critiqued, so I try to take the constructive criticism and apply it to my work and completely ignore the unconstructive kind.

What are the key-factors you base your role choices upon?

The key factors are based on two things; the technicalities and the art itself. The technicalities are taken care of by the director, the production process and the script; the artistic side comprises the character, how it affects me as an actor, and how I can perform it as truthfully as possible. I also seek roles that are unique, influential and require effort and study; something different from my previous roles; something that would be considered an addition to my repertoire.

Which character was the hardest to play?

I consider every character as a challenge that I have to overcome, so every character is difficult, because portraying a character with all its dimensions requires mental and physical effort and a long period of preparation so that it can appear as scripted on screen. However, I consider my most recent role in Clash to be the hardest, since the character I portray is completely different from who I am in real life.

What do you hope your legacy will be?

I hope to play a variety of different roles in as many different age groups and psychological states as my young beginning will allow, so that the audience will remember me as someone who dedicated his life to his art and gave it his all.

How was your experience at Cannes Film Festival?

Unfortunately, I didn’t have the opportunity to go. However, my participation in a film that was featured in one of the most significant international festivals, and its many positive reviews, alongside my role in particular have all been very rewarding for the effort I put into the character of Mans.

Tell us about your role in ‘Sheikh Jackson’?

My role in Sheikh Jackson is very touching for me, in a way, because it releases a side of myself that has always been there, a side I’ve been hiding. Sheikh Jackson touches on a very personal and hidden side of me that I can now present on the screen.

What’s your advice to those who look up to you?

Be truthful to yourself, and look up to yourself, don’t look up to anyone else. And to those who are nitpicking my mistakes, I say that life is too short to be wasted on monitoring what others do, so try to use your energy to benefit yourself rather than antagonizing others.

What are your coming projects?

This year, I’m taking part in two movies and a TV series: Sheikh Jackson and a surprise role in director Sherif Arafa’s “El Kenz” (The Treasure) alongside superstars Mohamed Ramadan, Mohamed Saad, Hend Sabry, and many more. I’m also taking part in the TV series “La Tutf’e Al Shams” (Don’t Put out the Sun), which is adapted from the novel by Ihsan Abdel Quddous with a screenplay by Tamer Habib. I expect that both will be very successful due to the powerful stories and the big names taking part in the projects, but unfortunately I cannot reveal details about the characters just yet.