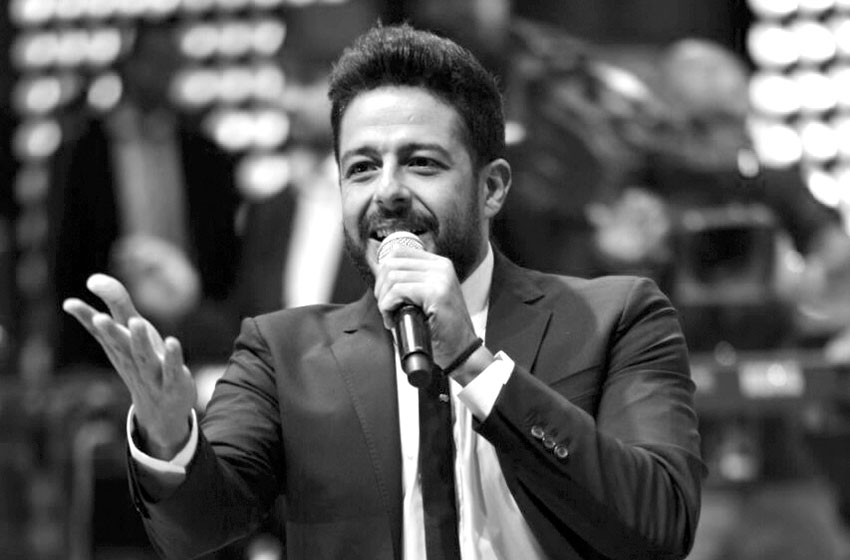 On Writing Music and His Musical Perfectionism

From edge pop to world music, the award winning musician, Mohamed Hamaki, has written and beautifully performed it all. We’ve had a chat with the Khalina Neish (Lets Live) hit-maker, and he has surprised us with his modesty and mission statement in his world of music. Check out what Hamaki told us on how he writes his music, his philosophies, and some insights on the Egyptian music scene and what it’s missing.

If you were part of your audience, how would you view yourself?

I would mainly see myself as one who’s concerned with what I do. Perhaps I do not take that many steps, or have many albums, but that only shows how much I like to take my time with my music because I focus so much on the details. I’m less concerned about how many albums or films I produce or star in, and more so about their quality.

If there was one thing you could change in your journey to the top, what would it be?

If I could somehow preserve the quality of my works, but produce more of them, that’s exactly what I’d try to do. However, I think that’s impossible in my case. To each their way and pace, and I find my current rhythm the most ideal for me.

How would you react if you were asked to become a judge in a renowned talent show?

I love the concept because the role of a musician is to give back to the community by offering sound judgment and advice in their field. In fact, if I ever had the chance to do just that, it would be my duty to accept the offer. The issue might remain in what show is in question, and whether or not I have the time to do what is asked of me; it is a huge responsibility to decide a contestant’s fate in the competition, which makes it a very challenging job that needs my undivided attention. I would hate to be overwhelmed by my schedule and end up misjudging a contestant just because I’m in a bad mood. I would also like it if that show would include original music. When competitors sing a known song, they don’t become famous for their own identity and so even if they do win, people are never really introduced to their style, which makes it very difficult for them to find a record deal.

Is there any music genre you never explored, that you would be interested in working on in the future?

I would not personally explore something different from what I usually do, but I am open to being featured in a variety of music genres, including rap. Simply because I am not a professional rapper; I’m a vocalist. I listen to different categories of music, but I certainly wouldn’t perform that kind of variety. You can love every genre, but you must also stick to the identity you built for yourself.

How do you view the music scene in the Arab world?

Talent wise, we have absolutely no problem. The issue lies in production. Egypt has never had a dearth in musical talent, whether in writing or performing, but we suffer crucial production problems that threaten to deteriorate the entire music scene. For a musician to succeed, they need talent and a good producer. Lately, you’ll find that as a musician gets more popular here and garners a bigger audience, that’s somehow met by less profit, which all goes back to incompetent producing. I think this is something we need to focus on in Egypt.

How would you like people to remember you 200 years from now?

This is something I’ve always thought about, ever since I started writing and performing music. I’m always concerned with the content of what I offer to the audience. I will retire one way or another, and when I do, I want to leave behind a legacy of high quality music. You can make music that dies with you, or music that outlives you, and I hope, for me, it would be the latter.

Tell us about your collaboration with HTC.

I’m very proud to be an ambassador for such a respectable and renowned company. We’ve been on wonderful terms for over a year now, and I cherish how they never ask me to do or say anything that I’m not convinced with. Every word I say about HTC is stemmed from truth. They’re very hard working and they have an eye for detail, which is something we both have in common. They pay attention to people’s feedback and they fix develop what their customers do not like. As a musician, I’m all about audio and display quality. Their new model has four microphones, which is capable of stereo recording and can be used professionally. The macro lens in their camera also captures great detail, and it all just fits perfectly with my mission statement and philosophy.

How do you stay connected with your audience?

Only lately, I’ve been trying to employ social media for that purpose. But overall, I’m not very social media savvy, and I’m not a very talkative person in general. I believe humans are just balls of energy, and doing so much talking would affect the quality of my work. So I don’t like using up most of my energy in socializing or talking. I do, however, have a great social media team who keep me up-to-date and connect with my audience.

Do you think social media helps celebrities or acts against them?

It depends on what you’re doing. It’s helpful when you’re looking for feedback from your audience on your work. But it could also be a source of trouble if you’re going through rough patches in your personal life that get exposed.

You just have to be able to separate between your career and your personal life. Hamaki, the singer, is the one who connects with the audience. My personal life remains private and is never deliberately exposed to the public. There’s nothing to hide, but I value privacy, so I only share with my audience what concerns my work, and I share my personal side with my small circle of family and few friends.

What is one obstacle that remains your biggest challenge?

Inconsistence. In my field, you must be ready for surprises and sudden changes of plans. It’s very difficult for me to make personal plans because at any time, something could get postponed or cancelled. However, I love my career and I always enjoy my work and even thinking about it.

What’s next for Hamaki?

I have an upcoming album next summer, and I’m finally working on a film! I know the album should be out first, but I’m a bit unsure about the timing of the movie.

I’d just like to say that I’m very grateful to have such wonderful people support me without even knowing me personally; it’s a beautiful gift! I appreciate their nearly unconditional love, and all the positive energy they give me. I think about them a lot and how I could offer them the music they so deserve.