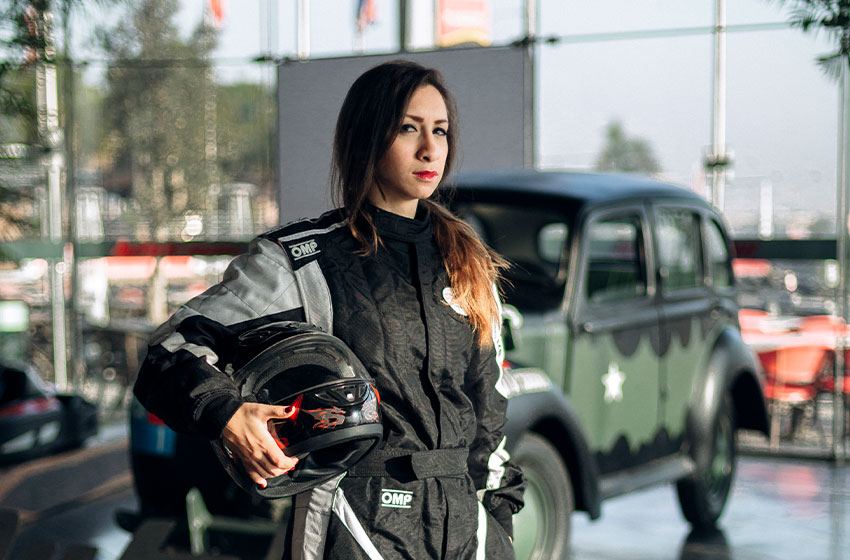 Holding Her Own in Male-Dominated Professions

As she overshadows the theatrical fog, a thrill of excitement is sent through the air. She starts striking through the reflective chords of her glistening electric guitar, and the clean and crisp sound waves of her tunes emanate rushes of adrenaline throughout the arena, similar to the blitz of ecstasy she feels in each and every car race she has partaken in. She’s a gleaming ball of ardor that exudes inspiration wherever she goes; she’s Ally Salem. We’ve had a chat with the inspirational guitarist and professional racing driver on how she’s broken all the stereotypes and flourished in typically male-dominated fields, here’s what she told us!

Tell us about yourself and your journey as a musician.

It all started when I was a little girl; I found myself a rock and metal mania, and fell head over heels for electric guitars. It didn’t take me long to realize that’s what I wanted to do. I started saving money since I was 10, and got my first guitar at 13, and ever since, I decided that I was going to be a rock star!

What is your background in music, and how were you inspired to pursue a career in that field?

I have no academic background, I just loved music so sincerely, and I believed in my talent.
I first got inspired to play some Metallica and Iron Maiden, and then moved towards blues. My ultimate milestone was playing for the late and legendary Gary Moore; he taught me a lot about my instrument, from basic techniques, all the way to musical competence. Around five years ago, I landed at Pink Floyd; they have a school of their own. If I were to describe my musical background, then I’d say I come from the school of emotions. I am so confident in my guitar feelings; nevertheless, I am revamping my education by learning from the jazz pianist virtuoso, Mr. Rashad Fahim because no one grows old for learning.

Tell us about ‘Andromida’ and how the band members have come together.

‘Andromida’ is the oldest rock band across Egypt, founded in 1987, basically before I was born! Amr Hassan, one of the founders and the keyboards player for the band, met the first guitarist of the band Ehab Al-Qalie in Alexandria and then Sherif El-Sharqawi, the drummer, joined. The band had prominent members throughout history with Amjad Al-Badri on bass guitar, who is now replaced with our current bass player Ahmed Anwar. The current lineup is Amr, Sherif, Ahmed and I. When the guitarist before me, Sherif Watson, had to leave the band, I got the invitation to join after winning the first prize with my other band ‘Headstock’ in Sawy’s Culture Wheel Rock Festival seven years ago, where ‘Andromida’ were the judges! Man, I was really proud I caught their attention! A year after, we had our first concert and I took the responsibility of playing all guitars for the band! It’s such an honor to have your idols as your partners. It’s been five years since I joined and according to the members, they are the best five years in their history!

You’ve played guitar with many renowned musicians, will you name some?

I had two bands before Andromida; Bluenotes, the best blues band in town, which was founded by the talented singer and harmonica player Hatem Hossam; and ‘Headstock’, the first award winner in Sawy’s Rock Festival, founded by the hard rock vocalist Hesham Zaky who also sang with ‘Andromida’ previously. A turning point in my musical career was with the Egyptian superstar Tamer Hosny with whom I was honored to join the stage and represent my rock culture to his huge fan base; it was indeed a great success!

Has your gender ever been an obstacle for you to rise as a star? If so, how did you break through?

Honestly, my gender was never an obstacle but a motive! Women are often stereotyped when it comes to male-dominated activities like electric guitar playing or car driving, but with my persistence to success, I was able to shatter all taboos. You come to my concert, and you hear a professional guitar player! Good art knows no gender.

So far, what do you consider your biggest achievement as a musician?

Joining Andromida is a great achievement since they are all much older and a lot more experienced than I am, typically my idols as I used to attend their concerts before I joined.

Tamer Hosny’s invitation is an insignia I wear all the time. Playing live with ‘Andromida’ in Dubai was another milestone for me and the band.

When did you discover your passion for car racing?

That moment I held the steering wheel and had my foot on the gas pedal, at 18. Just like guitars, I realized my driving is not going to end up on the road. I wanted more; I wanted to race.

How did your journey as a professional racing driver begin?

Since I established my love for motors, I started to learn about car details, mechanics and car modifications. I knew there must be another world for that. I went to a bunch of Egyptian speed test tournaments called “Autocross” in eight years back. Got introduced to the drivers and delved into this field. Started racing a year after with my daily car, then I instantly knew what my next challenge would be: building my own race car and becoming a real racing car driver. This came to life two years ago when I joined one of the strongest racing teams “Oilibya”, along with the champs of Egyptian motorsport. I built my race machine, the Mitsubishi Colt 1992 with the 1.6cc MIVEC engine from scratch. Got the chassis, installed full engine system, sport suspension, brakes, rims… you name it! Then my “Candy” was born and hungry for racing!

Tell us about your successful tournaments and the prizes you won.

I won the overall 2016 Egyptian Speed Test Championship for ladies, the first five consecutive podiums against ladies that year. But I am also introducing today another smash for stereotype, just like my model with guitars. I am competing against men, and performing just like them. Parallel to competing against girls, I win against men in the 1.6 liter (car engine capacity) category. Early last year, in Bin Zayed Speed Challenge, I won first place against men, and I have been on intense training lately with Egypt’s motorsport icon Shady Ossama, which reaped in the last three races in 2016/2017 since I became a consistent threatening rival to men, seizing my spot on the podium. Towards the end of last year, I have made a racing advertisement to Huawei.

Which race was the toughest and why?

STT Time Trials Round 1, 2016, was one of the hardest races I ever joined, since the race included many maneuvers and handbrake orders. But I always believe in myself and in my abilities. If people are able to do it, then I can do it, and do it better! I won the ladies first place that race and with that belief, the chain of wins started.

There’s always something going on in my weekends, hence the fact that I am a fulltime Account Manager for Bupa Egypt. A race, or a concert, or both! My diary is pretty much filled with tournaments and concerts with ‘Andromida’; racing and concerts are two faces for one coin that occurs bimonthly for me. My plans for 2017 is to expand regionally. I look forward to more regional concerts and perhaps regional races too!

What advice would you give to aspiring young women who idolize you?

My journey was never easy, but it’s worthwhile; it took me years until I was able to reach my goals, and it will continue take blood, sweat and tears to break my own records and set new benchmarks. Success is abstract, you shape it. Success is never consistent, never fall for that trap and always evolve. I won’t speak of gender or society shackles, I am a female, and it never stopped me.

No one will show you how it’s done exactly, you have to try yourself. If you never try, you’ll never know.