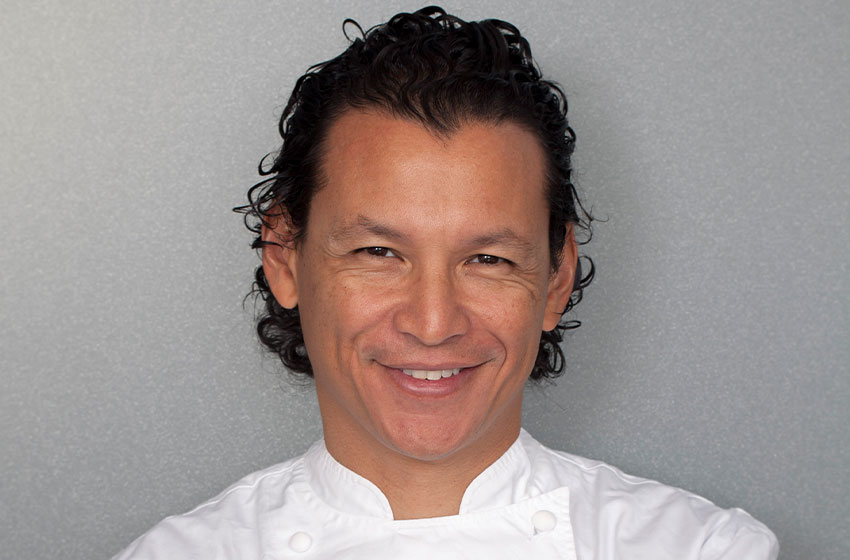 The internationally renowned chef, cookbook author, rockstar, and restaurateur is far more than a photogenic TV host. After having been exposed to a variety of cultures at a young age, Bobby Chinn has developed a culinary acumen that surpasses any other. We had the pleasure to chat with the culinary sensation himself, and he told us about his journey to becoming a professional and making it to Top Chef Middle East.

I was born in Auckland, New Zealand to an Egyptian mother and a Chinese-American father. I studied in the public school system in San Francisco, two private schools in Cairo, Egypt, and I got a BA in finance and economics in England. I left in search of something; anything, that I loved. I tried a bit of everything – from attempting to sell seafood to the mob, to stand-up comedy – and along the way, I also discovered my love and talent for cooking. I have been a hugely popular culinary figure throughout Asia, both for my two highly-regarded restaurants in Vietnam, and for the award-winning TV series, World Café, which I had hosted on Discovery TLC for the past six years. 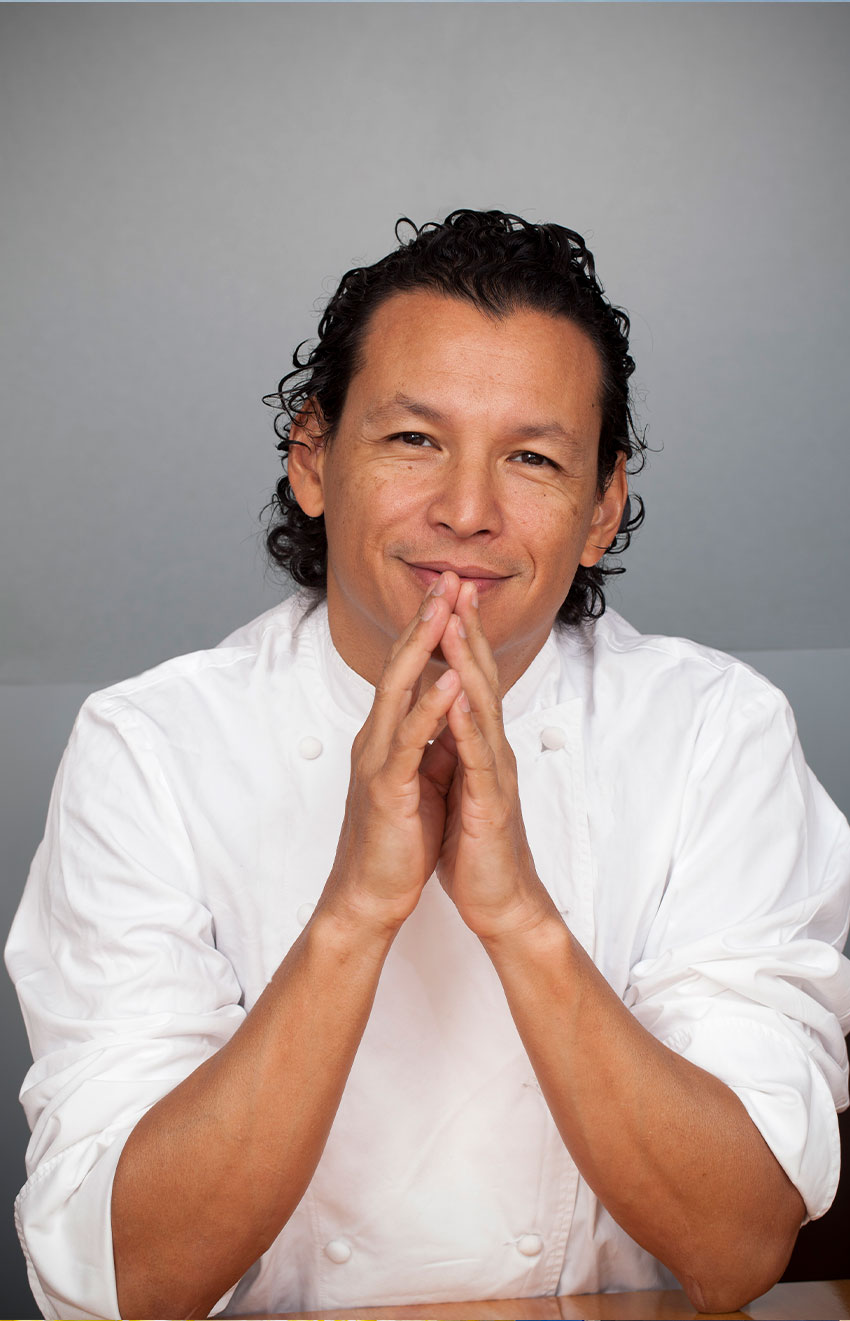 You’re half-Egyptian, half Chinese; how has the food culture of both countries affected your culinary taste?

I was exposed to a wide variety of cuisines at a very early age and I was open to try anything. Egyptian Chefs have their own dishes and their comfort food, Mexicans and the Chinese have their comfort food as well, but as an international person I enjoy cooking just about anything. I can cook foul and tameya, koshari, beryani, Mexican, Chinese, Thai, French ,Californian and Indian food.

It seemed like it was natural progression because I had two grandmothers from two different cultures; they were always there for me and they taught me how to cook.

Professionally, however, I think it was more than ego; it’s about having skills that cannot be denied. If you have your skills, your techniques and the required knowledge, you’ll be able to experience new things and acquire new ideas in the culinary field.

No, because Egyptian food cannot be recreated. It’s democratic food; how can you change foul or koshari? I don’t like to change or temper with anything so culturally-bound; it’s impossible to. The main reason for that is that Egyptian food is cooked for the people; it’s a kind of “comfort food” that has the same effect on me when I cook it or eat it, bringing back memories and warmth.

Middle Eastern cuisine is very unique and special.It has been influenced by Armenian cuisine, which was cooked by great chefs. They mixed and matched and created a variety of astounding dishes alongside the influence of Syrian, Iraqi and Persian cuisine. These dishes were prevalent because they were created using some really great techniques, so it’s very neutral food. It’s impossible for one to find what they don’t like as opposed to, for instance, Thai food that wouldn’t suit someone who doesn’t favour a spicy touch.

Of course! There are a lot of great chefs who have engendered unique ideas.

Some have developed ideas of what food should be created, treated and managed. Chefs like Gaggan Anand create brilliant molecular food, though I am not big fan of that particular food, but I really respect and appreciate the creativity of what can be done with modern cuisine using these modernist techniques. I was also influenced by those who taught me in the streets in Bangkok as well as in many other countries in Asia. I travel often so I’m always learning. Chefs don’t have to be famous to inspire and teach you, they only have to be good.

Tell us how you made it to Top Chef Middle East

My TLC TV show, World Café, let me travel the world, and I’ve lately been willing to film something in the Middle East. I think it’s not easy to do great shows in the Middle East because no one expects a guy with the name of Bobby Chinn to speak Arabic, let alone understand the culture. I was thankful that the executive producer of Top Chef was able to see my abilities; he offered me the role and I accepted.

You go on Top Chef Middle East, World Café, and you’ve been on plenty of other TV programs: Any anecdotes of disastrous live moments?

I think it’s changing now because Michelin was originally made for France and Europe, and has now extended to Asia and United States. However, Michelin chooses restaurants people cannot afford eat at, so it’s not just about the food, it’s also about the restaurant, the service, and even the bathroom! Generally, I don’t think Michelin is fair because there are plenty of great chefs with so much skill and potential, yet they don’t have Michelin stars. Great chefs make great restaurants, but great restaurants cannot make great creative chefs!

A word for amateur cooks

You have to decide whether you’re professional or not. There is a big difference between a chef and a cook. A chef has a huge responsibility to lead an entire team, but the cook doesn’t have this responsibility. An amateur cook is a person who simply enjoys cooking, even if it’s only at home without a paycheck. 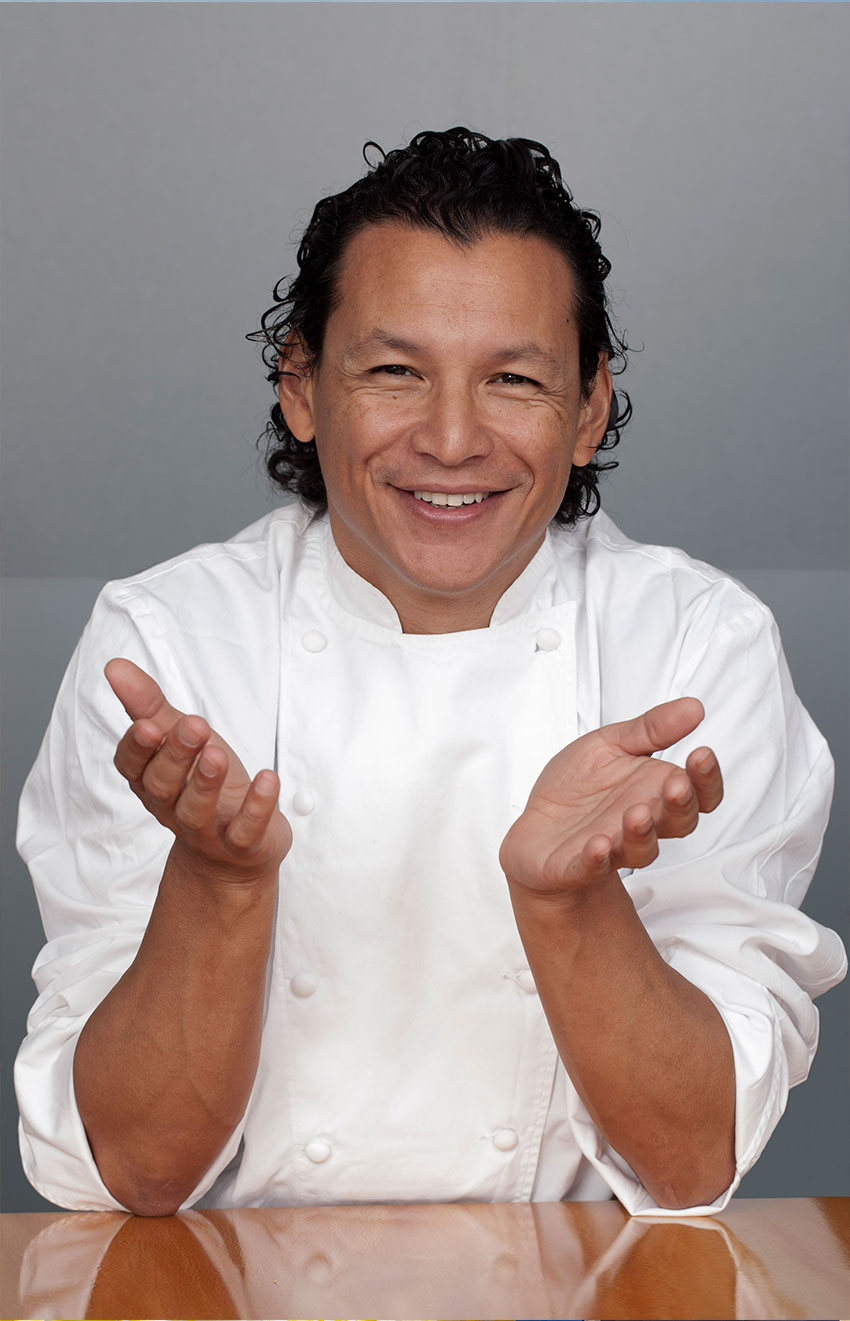 We heard you are quite the savvy musician; tell us about your band.

I’ve been playing guitar since I was 15. When I moved to Vietnam, I would always sing in karaokes and play guitar then that developed into playing in a live band.

My general director in my company in Vietnam was the godfather of jazz there. There was also a CEO of a company called TNT who liked rock and roll and he asked me to play in a jazz club, where I performed with the son of my general director. We performed every Friday, that’s when a lot of famous Vietnamese singers saw me there and started to invite me to concerts for a song, then two songs, and it just developed from there. I got to build a stage in my restaurant so I get to perform there every New Year’s Eve, other times in a special event. I like music!

We heard that your grandfather is the hero Saad el-Shazly; tell us more about him and your memories with him.

I first came to Egypt 45 years ago. I lived with my grandmother for a year and half when I was about 6. Grandpa taught me chess and Arabic and he took me out every Friday. He wasn’t that old to me, he was in his late four-ties so the generation difference wasn’t massive. I moved with him to London before he moved to Portugal after which time he was sent to exile in Algeria. I spent with him some time in Algeria and I visited him in prison, too. He taught me so many things! He really was an amazing grandfather, father, and husband. He was a very family-oriented man, and he was very funny.