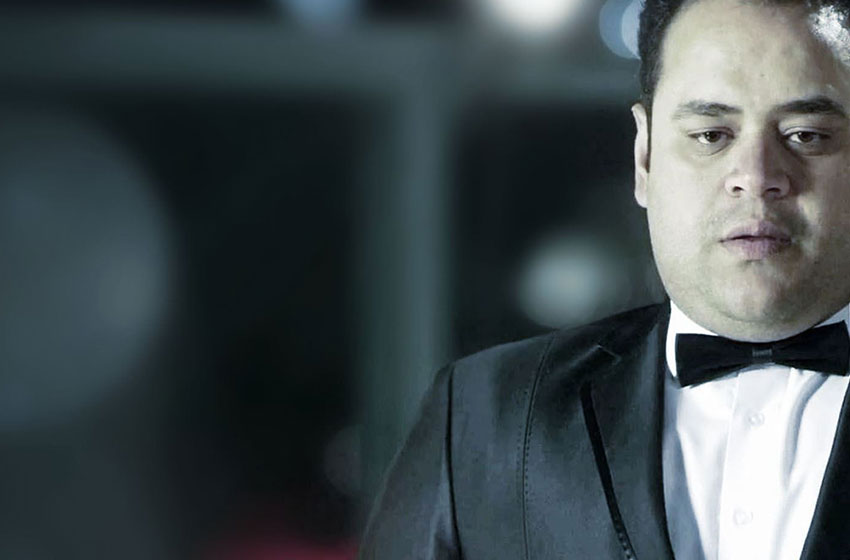 We know and love him as Amin in Grand Hotel or maybe Sayed in Tare’y (My Road) as well as the fatuous character Dr. Sameh in ‘EL Feil EL Azra’ (Blue Elephant). He’s the true definition of the challenging ease, the one you notice between 20 superstars with his brilliant performance yet simple and close to the heart. Here’s a glimpse of Tayson’s life.

When I was young, we had a movie projector and my father used to bring us many foreign movies to watch. I’ve always admired their acting and performance and tried to imitate them. My actual journey started when I was in Thanawya Amma, one of my old friends who is a theatre actor took me to a rehearsal where I felt something very special. I can’t even describe it in words, but I still have the same feeling every time I go on stage. When the producer of their play saw me, she offered me to play a role; I was very hesitant as I never imagined myself in such a position, but my friends encouraged me and I wanted to try something different, so I gave it a shot and here I am.

The villain! The good guy already has the sympathy of the audience, while the villain is often too complicated; you have to make people understand that he’s as human as the rest of the character and that he has aims and goals regardless of his intentions and how he reaches them. You have to make people empathise with him as well before they decide whether to hate or encourage his aims. It can be a very complicated job to do.

The most important thing for me to do is to look at their name and identity before studying their character and seeing if it would suit me and if I would be capable of portraying the character.

I love choosing something I never tried before, something totally new for me. In addition to that, the existence of the character’s persona should be logical even if it’s an imaginary character! Meaning; I could be a ghost, but if the role itself is not properly written, it will come off as cheesy and people won’t like it. People want their minds to be respected so that they can enjoy what they’re watching.

Commitment, exquisite accuracy, devotion, appreciation, and most importantly, respecting people’s minds. However, to fear god in whatever you do summarizes it all.

I would like to produce one day, yes. I’ve always had the hobby of writing and I even applied for scriptwriting in the Cinema institute but I unfortunately was not accepted. Yet, I still want to be a producer and most likely will be one day, especially because I want to try doing things completely out of the box.

When they pray for me, it’s the best thing I can ever ask for. However, people who storm at wrong timings and request photos are the worst!

Mainly how you can trust someone in the media who actually wants and always works for your benefit. It’s a very big and respectful company, they handle my relations with the media and sometimes even my social relations, they became my friends and I always value their opinions and include them in my decisions. I lacked the freedom to do such things with anyone before they came along and they filled the space.

I’m currently working on ‘Turab Almas’ (Diamond Dust), a movie by Marwan Hamed starring Asser Yassin. Another one is a movie by Hadi EL Bagoury with the super star Yousra and Menna Shalaby.