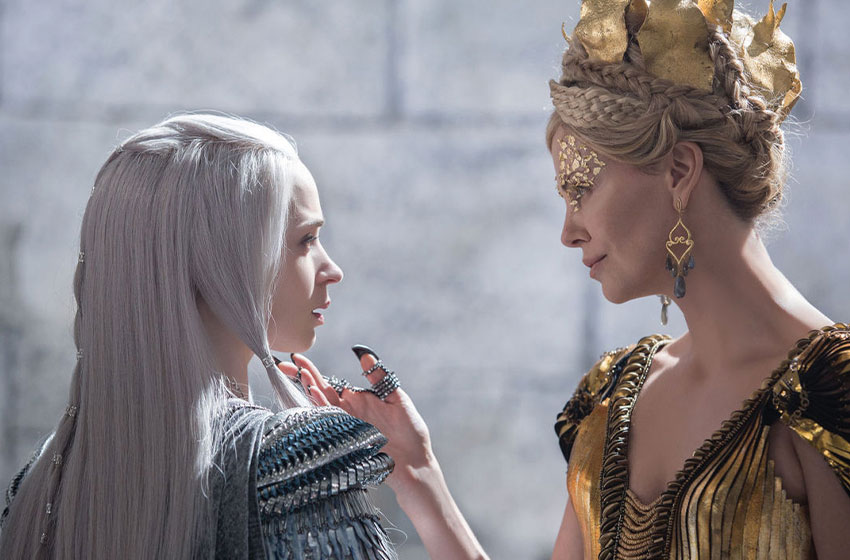 After the ground-breaking success of Snowwhite and The Huntsman, the prequel we’ve all been waiting for is finally here. Charlize Theron is back with Emily Blunt and they’re more malevolent than ever. We asked them a few things about their roles that we were quite curious about, and they couldn’t have given more spellbinding accounts on their characters!

Q. Charlize, Ravenna met a pretty sticky end at the close of the last film. Was it nice to find an excuse to bring her back?

Yeah, and I really didn’t think it would happen. I couldn’t figure out how they would do it in a way that felt organic or real or not forced. Joe Roth, our producer, was so sweet about it, and he said, “We’re never going to make one without you; you have to be a part of it.” I was like, “Good luck with that.” I thought the writers did a really good job to start it off as a prequel and make it feel more of an origin story. It was interesting because I got to explore more of the character through those relationships than I did in the first one.

Emily Blunt: Playing a villain is really fun. It’s heightened reality, especially in a fantasy. The boundaries become a little bit blurry about what you’re allowed to do and how far you’re allowed to go with that role. It was exciting that she wasn’t a clear-cut villain. She has this traumatic backstory as to why she becomes who she is, and for me when I read it there was always something a bit emotionally unhinged about Freya. It’s not an easy fit for her to be this evil queen. Her intentions are, in her mind, good, however delusional they are. That juxtaposition was a fun thing to play for sure.

Q. Emily, given Charlize had done such a good job on the first film, was it a little intimidating to step into her villainous limelight?

It was extremely intimidating. The thing is she’s a different villain. Freya just likes to pet small children, and strip love out of their lives. So they’re very similar. Haha, no, I liked that Freya was a very different villain and they hadn’t written these twin-like versions of a villainous queen. There are different forms of evil, and a morality play on what that is or isn’t. I like that you’re introducing her as a very normal girl with normal desires in life, like getting married and having a child. Through this tragic circumstance she becomes this hardened ice queen. I think I just decided to try not to do what Charlize did. I wasn’t given black tendrils; I was given ice.

Q. We have to talk about Colleen Atwood’s costumes. How much did they add to your characters?

Emily Blunt: The character comes through in every way. The costumes are the most transporting thing in a film like this. And yeah, I have the pale makeup and the white hair – which in itself is slightly alien to look at in the mirror – but as soon as that dress goes on, they affect you in such a way. There’s something so regal about wearing a corset. You can’t slouch. You have to stand up straight. And you move in a certain way that’s very different. You’re able to adopt a different persona and I’ve always loved the physical transformation of a character for that reason. With every role I do – contemporary and otherwise. For a film like this you really rely heavily on the costumes. And Colleen is brutal.

Charlize Theron: She’s brutal, yeah. You’d be like, “This is really heavy; I don’t think I can move.” She’ll say, “Good luck. Go.” But you look amazing. And then as you walk out of the room she whispers, like, “That’s why I have three Oscars.”

Q. What do you think is the kind of relationship do they have as sisters? It seems very strange.

Emily Blunt: It is and it isn’t. I think there’s a complexity to their bond and you can see there’s a lot of love there, when you’re introduced to these characters and met with the origin of what they were as sisters before they become these incredibly competitive, evil queens. I always loved those early scenes because I think their sisterly bond is something that is quite hard to pin down. Freya admires Ravenna greatly, and looks up to her, and can see that they’re very, very different. They really have each other’s number in that way, and there’s a profound understanding between the two of them that felt very real actually, and not a part of this heightened reality of a fantasy film. I have sisters so I know that it can be a complicated and beautiful relationship. Nobody can break your heart like a sister, and this film definitely explores that.

Q. Is there now a sisterhood between you?

Charlize Theron: God no. There’s something that happens when you meet somebody where in five minutes you just know, and that’s kind of what happened with me and Em. It’s not an everyday occurrence on a movie set to find yourself not in your trailer watching AMERICAN HORROR STORY. I didn’t go to my trailer once because Emily and I would be in a corner gossiping.

Q. Didn’t you have a kindergarten on set for all your kids?

Emily Blunt: Oh, yes and it was great.

Charlize Theron: It was really, really fun. It was such a great environment, and we’re all different but similar kind of people. We all worked similarly. Cedric really created an environment where all of us woke up in the morning and we were excited to go to work. Our kids were happy and there was a lot of laughing and a lot of..